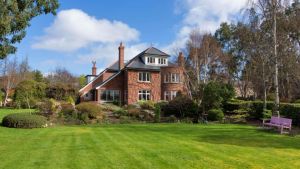 One of fhe first recorded economic bubbles in history had nothing to do with property, banks or bullion. It was the humble tulip bulb that led to what is commonly known as Tulip Mania in the Netherlands in the early 1600s, where a single bulb could have the same value as a river barge – where many Dutch people resided. The bubble burst almost overnight. An outbreak of bubonic plague was a contributing factor, in addition to the fact that many of the variegated forms which commanded the highest prices were infected by a virus which, while giving the tulips unique colouring – rotted the bulbs.

At Sonas, a 361sq m property standing on 0.86 of an acre in Brennanstown Vale in Cabinteely, there are more than 50 varieties of tulip currently in bloom throughout the garden, which were purchased by owner Leentje Folens at Keukenhof in the Netherlands, one of the world’s largest flower gardens, where seven million bulbs are planted annually.

Almost every room in the seven-bedroom house has views to the gardens which wrap around the property, and include some specimen acers, Cornus controversa, rhododendron, azalea and two giant eucalyptus trees. The gardens meander through gravel paths on different levels and have private meditation areas – Folens runs a holistic healing centre from a set of rooms adjacent to the house.

Also included are two ponds, one of which is a breeding ground for frogs.

To the rear of the house lies a large chicken run, with four happy hens which new owners may wish to retain. Also in the garden is a log cabin by gardenrooms.ie, and a very large dining area, with three types of built-in barbeque for summer parties.

The property, lying over three floors, was designed by Folens and architect Desmond Barry to “maximise space, light and fresh air” and was constructed in 1993.

Two reception rooms flank each side of the hallway, which leads down to the swish Danish Design kitchen – complete with Míele appliances and a cobalt blue Aga. A breakfast room, living room, office and large utility lie off the kitchen. Upstairs over two floors are seven double bedrooms – the master is spacious, with a sauna in the en suite.

While new owners will want to update some parts of the property, the gardens are what make this a special home. Sherry FitzGerald is seeking €2.5 million for the house on 0.86 of an acre. Not far away, Cairn Homes is reputed to have paid €18 million for a 7.8 acre site in this much-sought-after neighbourhood in 2015.

My daughter is excluded from the friendship groups in school
4

Ask the Expert: My partner’s smoking again and I hate it
Real news has value SUBSCRIBE