Rathfarnham five-bed Finvara home has many original features across its 2,000sq ft 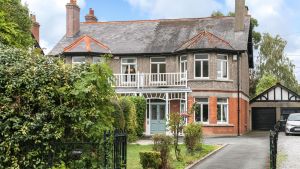 A portrait in oils of Finvara’s first owner hangs above a black marble fireplace in the diningroom. John Thomas (JT) O’Farrell, Labour politician, trade union activist and long-serving member of the Senate alongside Yeats and Gogarty, was 39 when he bought Finvara in December 1927. Life in Finvara clearly suited the O’Farrell family and it is only now, after three generations of ownership, that the house is on the market for the first time in 91 years. JT O’Farrell paid £1,375.00 in 1927. Agent DNG is today asking €895,000.

The name Finvara comes from WB Yeats’ The Land of Heart’s Desire. One of four of a kind and set well back from the road, houses of this age and period type are reasonably rare in Rathfarnham. Number 9 Willbrook Road, next door,  sold for €875,000 in April 2015.

The diningroom fireplace is original, its black marble decorated and tiled inset quite fancy. There are a great many similar original features in Finvara, and a great deal about its layout, size, gardens and comfortable feel that make it an ideal and likeable family home. This is an executor’s sale, and Finvara needs modernising, but it more than accounts for itself in a 189sq m (2,000sq ft) floor area over three levels with five decent-sized bedrooms, light-filled interconnecting reception rooms with an interesting side door, an even more interesting double arch in the hallway framing both the stairs and rear kitchen; gardens front and back with mature trees, hedging and room for play are also a highlight.

High ceilings give a feeling of space and nicely accommodate features like ceiling roses, cornicings and tall original doors. The front drawingroom has a bay window, picture rail and hardwood fireplace with inset, blue, embossed tiles. A side-garden door in the diningroom has panels of coloured leaded glass. The front door too has leaded glass, all the better to light up the hallway arches.

A new owner will undoubtedly modernise the kitchen/breakfast room, which is functional and equipped but small. There is space to enlarge to the side and into the garden.

A bedroom on the rear return has a glass-panelled door, cast-iron fireplace.  The family bathroom and toilet are separate and the main bedroom, off the first-floor landing, has a bay window to mirror that in the drawingroom. It too has a cast-iron fireplace, as well as views of high trees in the front garden and opposite. A second front bedroom has a timber-railed balcony giving a sense of its period. The fifth, top-floor bedroom has a dormer-style window and sloped ceiling and was, the family assure, a much favoured playroom for generations of youngsters. A detached, ivy-clad, concrete garage could convert to a myriad of uses – home office, playroom or studio.