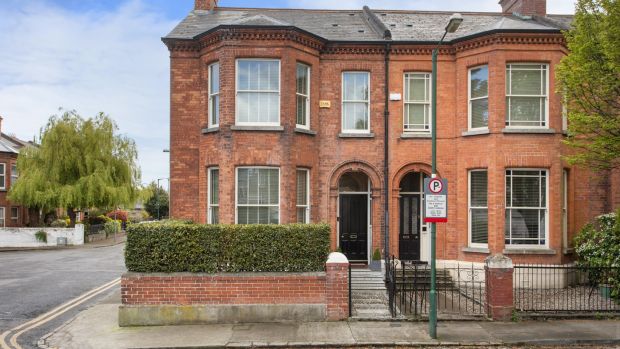 It’s 17 years since the owner of 14 Auburn Avenue, Donnybrook, moved into the house with her sister. It had not been touched in some time, she says, and so their initial upgrade included replacing the windows with timber sash models, adding a dormer to the attic and building solid wood wardrobes in the two main bedrooms.

Some 10 years later, as the owner and her husband had two children, they needed more living space and additional storage, and OC Architects designed a sleek bright kitchen-dining room that used up some of the outside space but at the same time opens on to it in a clever way, blending indoors and out.

If the kitchen looks familiar, it could be because the owner was inspired by that of her uncle, the designer John Rocha – whose own home in nearby Leeson Park has just gone on the market – and brought his contrasting glossy white and dark wood colour scheme to her own kitchen. The additional storage is hidden behind a secret door in the solid kitchen wall that opens to a utility room with floor-to-ceiling cupboards and a tall window on to the courtyard.

The garden at the front is gravelled, and hedging behind railings lends privacy. Beyond the black door, the hall is tiled in a creamy colour and the paint throughout is Farrow & Ball’s Skimming Stone. To the left are two elegant interconnecting reception rooms with original marble fireplaces and built-in storage. There’s a generous bay window in the front room, while the rear reception room opens through a glass door to the courtyard. A window over this door adds extra light.

From the hall, with its lovely decorative arch, a few steps lead down past a guest toilet to the expansive kitchen, lit by two walls of glass and two rooflights over the island. Huge doors slide open to the granite-paved courtyard, where the gas barbecue is piped into the mains; there is a side gate. The dining area is so large that the table can seat 20, and an original fireplace is now a nook for little children to play in, though it could be reconfigured to take a stove. The BER is D2.

Upstairs, the main bedroom at the front benefits from the same bay window, and the three large bedrooms share a fully-tiled bathroom. The children’s bedrooms are decorated with the gracious flair of their mother, who runs the children’s brand Stork & Co; this has a physical presence in Donnybrook village in addition to the online shop that started in the back bedroom.

Up a second matching staircase with a Velux overhead, the attic bedroom is large and bright and has an en suite bathroom.

Overall, the floor area is 185sq m (2,000sq ft), quite a contrast with the 16sq m courtyard, but it is just a few minutes’ toddle or scoot to Herbert Park with the soccer pitches and a smallies’ playground, while all the amenities of Donnybrook are at the top of the road, which has disc parking. The house is on the market with Sherry Fitzgerald seeking €1.45 million.