The Victorian-era house, at 43 Leeson Park in Ranelagh, was purchased about 20 years ago, and is now a perfect marriage of period detail and contemporary design. 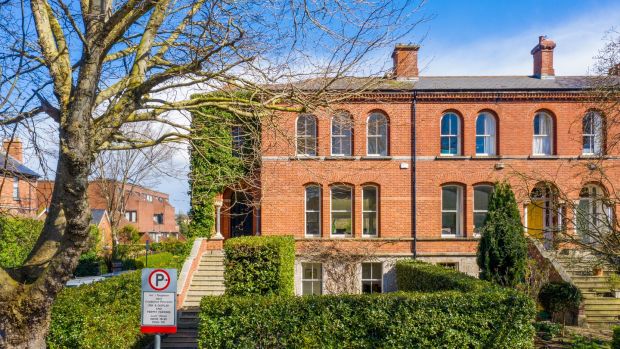 “Balance and proportion are the foundations of good design,” says John Rocha, one of Ireland’s most notable fashion designers. Originally from Hong Kong, after studying design at Croydon School of Art in the UK he arrived in Dublin in 1978, and so began the long relationship between Irish fashion and the convivial couturier.

His brand, though it has gone through its share of ups and downs, trades on a quality cachet which has been used for many collaborations, from glass design with Waterford Crystal to residential, leisure and hotel projects throughout the world.

He is now semi-retired at the age of 67: “One of the reasons I stopped [in 2014] was I had never spent a single Chinese new year in Hong Kong, as it always coincided with Fashion Week, so I wanted to do it before my mother passed away.” Daughter Simone, who followed her father into design, was another reason: “I thought there is no point competing with my own daughter: Simone would have a show on a Tuesday and mine would be would be the following day.” With the advent of his second grandchild – due this week – and his three children now living in London, he and wife Odette have made London their permanent base.

Their Dublin home, a Victorian grande dame at 43 Leeson Park in Ranelagh which they purchased about 20 years ago, is really something. It was in 11 bedsits and Rocha spent a year planning its conversion back to a family home. His Dublin-based company, Three Moon Design, employed two architects at the time, as Rocha had moved into architectural design after his collaboration with architects Douglas Wallace for the Morrison Hotel. Architect Luke Hickson was tasked with the technical complexities to bring Rocha’s design for the house to fruition. The long-standing relationship with Hickson remains, as he is currently working with two of Rocha’s children in London; designing a home for Simone, and a restaurant – Cafe Cecilia, named after Rocha’s mother – for son Max.

The result is incredible and after 18 years the design is still timeless. “All my work is about pleasing the eye. The Georgians didn’t have lots of light, but it is the most important aspect in design so we opened it up so the light spreads in from both sides,” he says.

With the removal of internal walls, all the spaces at garden and hall level now run into each other, with swathes of light coming in through enormous panes of glass to the rear. But this is not your run-of-the-mill glass box added on to a Victorian house. Here a ceiling soars from the dining table up three storeys to a roof window – and you can just imagine the view on a clear, starry night.

In the main reception rooms period and contemporary details really complement each other, where shadow gap ceilings sit adjacent to intricate old cornicing. It has a bit of a gallery feel, as storage is concealed, and is further enhanced by notable artworks that take centre stage against neutral backdrops.

The only internal doors are those on bathrooms and bedrooms, but the strategic placement of walls gives it an open feel, while still having pockets of privacy.

The principal bedroom is one of the standout features of the property, where sleek lines contrast to the almost feminine curves of the Victorian windows. This is where attention to detail really becomes apparent; blinds are hidden away inside a frame flush with the old shutters; dressing areas – though not as large as you would expect from a man who has dressed Oasis, Robbie Williams and Brian Kennedy – lie flush to the wall, giving the place a lovely peaceful air.

Adjacent lies the pièce de résistance. From the back of the house you might question the function of a large concrete wall half way up the three-storey 352sq m (3,789sq ft) house.  This is Rocha’s own hanging garden which opens up via concertina doors from his bathroom. A bespoke limestone bath which he designed himself – as he did with all the units in the house – takes centre stage: “I grew up on a housing estate in Hong Kong, where there were 10 of us in my family. There was no bath, just a hole in the ground and a tap on the wall, so now I take a bath every single day.”

While the entire house has a neutral palette of white against wide-plank Canadian walnut and ivory limestone flooring, a downstairs loo is sure to spark curiosity. Its black glass walls and hand-cut glass basin were the result of the Rocha’s foray into working with black glass for one of his collaborations. It is a bit madcap compared with the rest of the house, but will certainly be a talking point at dinner parties.

The property has four bedrooms. Max’s split-level room is soundproofed as it was shared with a drum kit, while Simone’s room lies on the ground floor with its own entrance. The photographs really do not capture the interiors of this most remarkable property, which has now been launched through Hunters Estate Agents seeking €3.95 million.