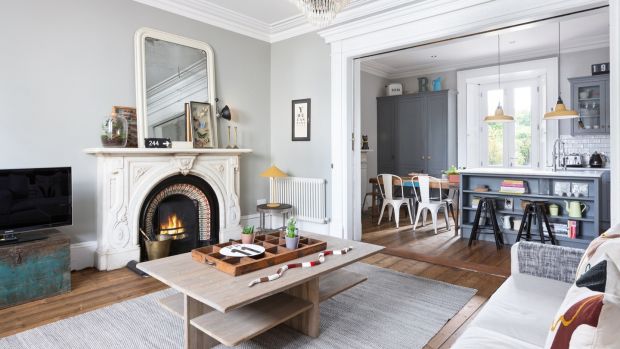 Bray seafront has an atmosphere all of its own. The Victorian resort boasts a promenade wide enough for that era’s swishy skirts, amusements a go-go and Bray Head in the distance framing the scene and the coastal access route to Greystones.

Number 4 Warburton Terrace is just a block from the shorefront and the end of terrace four-bed presents in walk-in condition. The decor is by owner Vanessa MacInnes, interior designer and co-owner of Industry Design, a lifestyle store and eatery that won The Irish Times Best Shops award five years ago. MacInnes also runs its sister children’s shop, Barn, on nearby Exchequer Street.

The house bears all the hallmarks of her signature style. All the next owner has to do is unpack bags and arrange furniture.

The mother of two was pregnant with her first child when she first crossed the threshold and the entrance hall made up her mind, before she had even walked into the interconnecting rooms where there are grey marble fireplaces and where the previous owner had installed the kitchen in the back room.

Mac Innes, whose sister Danielle is also an interior designer, grew up with parents who remodelled homes as a pastime. She had lived in 15 different houses by the time she flew the nest and over the years has become used herself to all the dirty work of a refurb: plumbing, electrics, insulation and replastering.

“The house was in pretty good condition when we bought it. All we had to do was decorate.”

The 225sq m/2,432sq ft property has ceilings rising to 10 feet at entrance level. Off it the interconnecting reception rooms are laid out with the living room to the front where it has a bay window, chevron detailing and a very decorative fireplace with arched tiled inset detailing. There’s also room for a sizeable sofa and it’s where the family cosy up in front of the fire in winter.

The kitchen, her own design, has painted units and Ibiza marble countertops, which she selected from Wicklow-based Miller Brothers through stone masons Roe & Son.

“It is similar to Carrera but has a more defined grain,” she explains. A table with folding legs is just one of the many pieces that came from her store. The pine timber floors throughout have been coated in Blanchon hardwood waxoil that gives them a deep matt tone.

The back window here has been turned into French windows that lead out to the south-facing garden, a contemporary space broken into different areas by low terracotta-painted walls. Here there is an outdoor fire with bench seating – a gorgeous corner to retire to watch the sun sink.

Down a few steps to the return is a second sitting room in what would have originally been the kitchen. MacInnes toyed with returning it to its original use but is grateful that she didn’t for with two small kids it gives her a second sitting room that can double as a playroom with a door to shut out noise. The original quarry-tiled floor remains while a wood-burning stove is set on a platform within the inglenook chimney which is lined with Moroccan, zellige-style tiles to help radiate heat back into the room.

The property has four bedrooms. The main is to the front of the first floor with a second double on this level and the family bathroom. The other two are on each of the returns, with one currently set up as a home office. There is a guest toilet on one level and a shower room on the other.

The attic room is sizeable, adding a further 26 m/279sq ft of space and where the ceiling heights are about 2.2 metres. This is her parents’ (photographer Justin and Marion Mac Innes) favourite room. Her mother helps out a lot with babysitting and closer proximity to her parents is their primary reason for moving.

“We love Bray but we need to be nearer to parents.”

The C1 Ber-rated property measures about 189 sq metres/2034sq ft, excluding the attic and a basement that extends to about 55sq m/600sq ft – ceiling heights here only range from about 1.5m to 1.75m, but it’s handy for added storage. To make it habitable it would need to be excavated to improve ceiling heights.

The property is now seeking €750,000 through selling agent SherryFitzGerald.