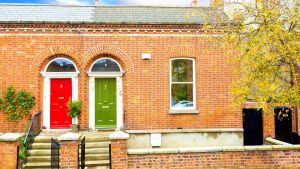 The houses on the less frenetic end of Beechwood Avenue – the upper part of this popular Ranelagh road near the Church of the Holy Name – enjoy a calmer pace of life to those at the end closer to the village’s main drag.

Several houses on the road have already sold this year, according to the property price register. Last February No 22, a terraced redbrick, sold for €850,000; while No 33, a five-bed bay-fronted Victorian that was renovated in 2007, sold for €1.25 million.

No 4, two doors from the crossroads, came to market earlier this year seeking €860,000. The three-bed, semi-detached redbrick, with a west-facing back garden and in need of complete modernisation, sold for €830,000, marking a slight softening in prices compared with the start of the year.

Now No 15, a similar redbrick, villa-style semi, on a 6m-wide plot with valuable side access, is being brought to market by agents Lisney.

The house has been in the same family for three generations. The current owner inherited it from his grandmother 40 years ago and has been updating it ever since.

The decor is busy in places, and shouldn’t distract from the property’s fine period features, which include a 12ft-high ceiling in the nicely proportioned formal front room, painted in Biscuit, a rich caramel colour by Colourtrend. The wall colour ties in with the decorative cornicing and ceiling rose. These look the part but are not original, having been imported by the owner from France.

To the rear is the first of the property’s three double bedrooms. The original house has been extended here to include a utility area, family bathroom, living room and a kitchen, which has windows on three sides as well as a roof light. It has vanilla gloss units and timber countertops, and looks out to a west-facing garden that is wider than it is long, about 25ft wide by 23ft deep.

Its stone boundary wall abuts the Luas Green line and was built when the transport authority acquired part of these gardens to accommodate the electric track. As the crow flies, the Beechwood Luas stop is literally over the wall but about a three-minute walk from the property. The trams whoosh by the end of the garden, but this is likely a sound that would become white noise after a time.

Upstairs are two double bedrooms. Both have original cast-iron fireplaces and ceiling heights of over 9ft.

Lifting the lockdown: A new way of buying and selling houses
3

Property market: Is now the time to buy?
5

‘I saw young girls get kicked, hit, sprayed and dragged off gasping for air’
Real news has value SUBSCRIBE