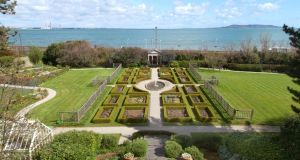 The garden of Deepwell in Blackrock, Dublin

Just three years after its purchase for €8million, Deepwell, in Blackrock, one of Dublin’s best-known luxury properties, is back on the market, and this time it’s asking €13million.

The renowned Palladian mansion and former home of the late businessman John Reihill of Tedcastle Oil made headlines when it became the most expensive house sold in Ireland in 2014, marking the first major residential sale in the State since the property crash.

Now the buyers of the 534sq m/5,750sq ft property on 2.38 acres, Singapore-born Cynthia Chua and financier husband Nick Holman, are hoping to turn a profit of their own by selling Deepwell on as a development opportunity.

The Irish Times has learned that invitations to tender have been sought from potential investors willing to develop apartments on the elevated sea-facing site beside Blackrock village.

There is no planning permission to facilitate such a development, but the owners have engaged architect’s firm Plus Architecture to conduct a feasibility study for a 42-unit apartment scheme on the lavish grounds of the former Guinness home, itself a protected structure.

In recent weeks agents Sherry FitzGerald (who brokered the previous sale of the house) and its commercial arm Cushman & Wakefield have circulated marketing literature and feasibility plans among potential buyers for Deepwell with a price tag for the entire of around €13million.

The sale process guidelines sought “best and final” bids by noon on Wednesday, June 21st. However, the agents declined to comment on the level of interest, or whether any bids have been submitted.

Given its coastal location beside the Dart and Blackrock Shopping Centre the Deepwell site would doubtless have development appeal. The promotional literature for the sale says that planning policy for Deepwell is provided for under the Dún Laoghaire Rathdown County Development Plan 2016-2022 and Blackrock Local Area Plan 2015-2021.

The feasibility study identifies the Deepwell site as a “potential development area” within the Blackrock Local Area Plan because of the plan’s stated goal to improve the connectivity between Blackrock Park, the Dart Station, the main street and the shopping centres. It identifies Deepwell as “the only site with the capacity to contribute towards the objective”.

The Local Area Plan allows for residential densities at a minimum of 50 units per hectare (20 units per acre) within 1km of a railway station or quality bus route.

Plus Architecture has drawn up a plan that includes 42 units in two stepped blocks over five levels on either side of the main Deepwell residence with a target net revenue of around €51million for a developer. There has been no consultation with Dún Laoghaire Rathdown County Council.

Access to the proposed scheme is adjacent to Blackrock Dart station, while Deepwell would be privately retained with existing access and a “smaller private garden”.

The unique Italianate gardens for which the site is probably best known would be retained, while the tennis court and vegetable garden would be removed. The grounds closer to the sea have been reconfigured as “shared amenity space”.

If the sale were to go through and the plans to develop Deepwell brought to the planning stage it is likely there would be robust local opposition to the plan.

The property dates from the 1700s when it was known as Fairy Hill, and Richard Samuel Guinness (co-founder of the Guinness Mahon banking firm) doubled its size in the 1850s to the footprint it stands on today with expansive views across Dublin Bay to Howth Head.

The Reihill family lived there for more than 70 years, and in the 1950s added the impressive parterre garden and a distinctive classical temple.

The seven-bed main house spans 534sq m (5,748sq ft) over three levels and at the time of sale in 2014, though in good condition, was probably ready for a refurbishment to meet more contemporary needs.

It’s unclear whether the owners have carried out any upgrades to the property, and it may be the case that the house, though protected, could be reconfigured as luxury apartments following any property sale . There is precedent for this at the Neptune House development in nearby Monkstown, where the original Georgian villa is being refurbished with a single luxury apartment on each level.