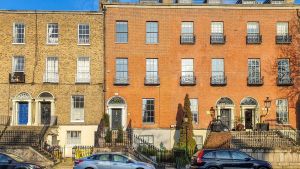 Number 86 Pembroke Road is a fine period home that offers what feels like acres of space to entertain across its three levels and comes with a self-contained one-bed apartment at garden level.

Within a short stroll of Ballsbridge, Donnybrook and Baggot Street Upper, it last came to market in 2016 when the four/five-bed was asking €2.25 million. The handsomely proportioned townhouse, which has its own private granite steps to the front, sold in January 2017 for €2.125 million, according to the property price register.

It had already been extensively upgraded when it last came to market with much of those features still in situ, the marble black and white tiles that cover its hall floor, for example, and the decorative plasterwork on the ceiling above has been picked out in a soft bone white.

The interconnecting rooms at hall level have broad oiled timber floors with the breakfast room to the front enjoying southern light and smartly furnished with a mid-century tulip table. The adjoining kitchen has crisp, French grey lacquered units with some units built around the original interconnecting doors. It’s smart and modern with the fireplaces in matching black and matching ceiling roses above.

There’s a bright, dual aspect garden room on the return where patio doors open out to the garden, a private space paved in pink sandstone flags, accessed via a set of granite steps.

The first floor has a drawing room to the front, with tall multi-paned windows beaming warm sunlight in on even the darkest of days. These rooms, like those below have working shutters, dispensing with the need for curtains but the rooms are big enough to take big swaggy drapes for something more ornate.

The furniture here is a mix of styles from regency tables to art deco seating with unusual taxidermied specimens of a gun-toting fox and hare bookending the mantlepiece.

The room to the rear, used by the former owner as a formal dining room, is now set up as a smart home office. The ceiling heights here soar to 3.8m.

The main bedroom suite occupies all of the second floor with the bedroom to the front and an ensuite bathroom linking it to a large dressing room to the rear. This could equally work as a nursery or another bedroom and has separate access from the landing.

On the second floor return there is a second, secret garden, a roof terrace that is a glorious surprise and while north-facing is utterly private with vistas that extend from the spire of St Mary’s Church on Haddington Road to the Aviva Stadium.

‘It was absolute chaos, but we were able to find a sense of peace’
5

Quarantine in Vietnam: ‘Our first night was a little rough, it was very hot’
7