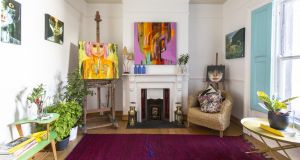 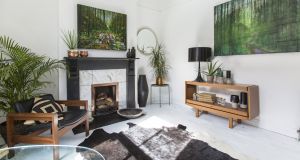 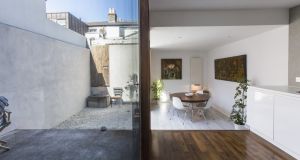 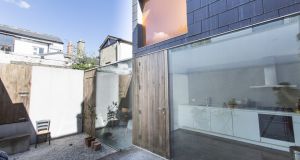 One road back from the canal, St Kevin’s Road is in the heart of Portobello, a quiet road lined with terraces of Victorian redbrick houses. The owner of number 33, Tim Mudie, bought over 20 years ago when he was working in advertising – the house was a short stroll to his office and it was the location and the proportions of the bright rooms with their high ceilings and period features that first appealed.

Mudie is now a full-time artist, and his colourful, striking work hangs on most walls in the two-bedroom house. It’s not usually like this, he says, a little sheepishly: a friend who helped get the house ready for sale suggested it, and the effect of so many vivid pieces is to help create a warm, stylish home. There are two reception rooms, and two double bedrooms, the larger runs the width of the house to the front and has its original marble fireplace.

A major selling point – apart from the location – is the cool, modern rear extension designed by award-winning architects ODOS. It’s a perfect example of the skill and vision an architect can bring to a relatively small job and make a massive difference to a house.

In 2007 Mudie commissioned the firm to rework the kitchen in the small two-storey return to the rear. ODOS completely reimagined the return – upstairs creating a new bathroom with a floor to ceiling frameless window glazed with orange glass – an inspired choice that gives privacy to the space but also makes it look like a warm, glowing lightbox at night.

Downstairs the return was extended to create a good sized dining area and kitchen fitted with sleek custom built units. Two floor-to-ceiling frameless windows add to the minimalist feel of this perfectly modern space. The small patio garden – with pedestrian access to the rear – could be improved with some greenery. The front door – topped with a fanlight – opens directly on to the street. Parking is on-street.

Hugh Wallace: The day I stopped drinking changed my life
10