Libeskind makes peace with Poland as he reaches into Warsaw sky 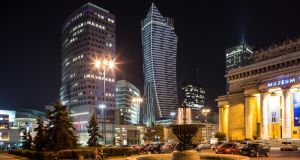 For Daniel Libeskind, Zlota 44 is a symbolic statement about people returning to a Warsaw that was devastated by war, destruction and catastrophe – and now a city completely reborn.

“I design affordable housing, luxury housing, museums and cultural projects. Factor in skyscrapers and city planning, too,” he says. Sustainability, balance and light are prime considerations.

I knew Dublin very well before I ever went there because I am an avid reader of Ulysses. If you read that book, as Joyce said, there is nothing that you would not know about Dublin and everything else about Irish culture and history

The principles of regeneration and cultural memory – often in tangent – are typically integral to Libeskind’s work. Compare across time, for instance, the Grand Canal Harbour development in 2010 to the new Zlota 44 in Warsaw, Europe’s tallest residential skyscraper, formally opened this month.

Both projects are located in previously rundown areas: derelict docklands in Dublin and an overlooked inner-city part of Warsaw. Libeskind has a special affinity with each of these cities for different reasons.

Just why Libeskind took on Dublin’s former docklands relates not only to being a challenging regeneration project, but to James Joyce. “I knew Dublin very well before I ever went there because I am an avid reader of Ulysses. If you read that book, as Joyce said, there is nothing that you would not know about Dublin and everything else about Irish culture and history,” says Libeskind, when we meet at the Zlota launch in Warsaw.

“When I went to Dublin, I felt that I’d been there before. And then of course I discovered a fantastic city with a great, great project.”

Different criteria prompted Polish-born Libeskind – nowadays a Manhattan based US citizen – to accept the Warsaw commission. Although fluent in Polish, Libeskind always refused to return to his country of birth, until now.

Did agreeing to build Warsaw’s highest structure mark a symbolic full circle and perhaps a reconciliation with the anti-Semitism he experienced as a child in Poland? “Yes,” says Libeskind, “it is true. Poland today is a different country and Warsaw has totally transformed into a city of freedom.”

I do not believe that a building is an industrial product. It’s a work of culture, a cultural communication that has to relate to history

Libeskind was born after the second World War to holocaust survivor parents in a crumbling tenement block in Poland’s industrial city of Lodz. “We lived in the shadows of totalitarianism,” he says. By the late 1950s the family had immigrated via Israel to the Bronx in New York where home was one of North America’s first ever social-housing projects – the Amalgamated Housing Co-operative.

Drawing on his early years, Libeskind sees both tenement and social housing as having contributed to his long-term vision of architecture.

“Cities are not only about museums, churches, government offices and so forth: cities are about living,” he says. “The reality of my own experience during my formative years was that I never lived in privileged buildings such as Zlota 44. Where I did live, however, has had a huge impact on my work.”

Cultural memory is a kind of metaphor about the past manifested architecturally through materials and design. Libeskind is adamant: “I do not believe that a building is an industrial product. It’s a work of culture, a cultural communication that has to relate to history.”

While the design of the Bord Gáis Energy Theatre draws on its former docklands setting and images associated with shipbuilding, the sweeping shape of Zlota 44 evokes the flight of the eagle, with curved lines allowing light to bounce off the building’s edges.

“Zlota 44 can be seen as an emblematic sculpture in the round and almost a counter to those Soviet blocks of the past,” Libeskind says. He remembers, from his childhood, the formerly-named Joseph Stalin Palace of Culture, which sits across the road from Zlota 44. “My photograph album has a picture of myself and my sister, like two mosquitos, in front of Stalin’s gigantic colossus that was built to oppress the Polish people.”

For Libeskind, Zlota 44 is a symbolic statement about people returning to a Warsaw that was devastated by war, destruction and catastrophe – and now a city completely reborn.

Bord Gáis Energy Theatre and Grand Canal Harbour development, too, is a work of culture that relates to Dublin’s past, but on a different scale.

“Dublin has a tradition of music, poetry and of dance but never had a venue for 2,000-plus people that could be flexible and accommodate music, theatre, opera and the TED conferences – and where events could be programmed 365 days a year. It’s very compact, without mega lobbies and with top-level acoustics. Alongside the public piazza, the theatre has been part of a kind of regeneration not only for the docklands, but of Irish culture.”

In response to whether Libeskind ––who declares a deep fondness for Guinness – would consider another undertaking in Dublin, he is adamant: “Any time, any place, any way – I’d love to go back.”