‘It is time to move on’: Regency rebrands after gangland killing 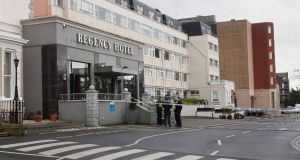 Regency Hotel: crime-scene tape at the hotel in 2016; it is now the Bonnington. Photograph: Gareth Chaney/Collins

On February 5th, 2016, at least four gunmen burst into the Regency Hotel in Drumcondra in Dublin, where a weigh-in for a WBO lightweight boxing match between Jamie Kavanagh and Antonio João Bento was taking place. A Dublin man, David Byrne, was shot dead and two other men were injured.

“After that day business was tough, and events and rooms were cancelled. The effect lasted for a few months,” says James McGettigan, managing director of the hotel. “The sales and marketing teams worked hard to drum up business. We had a lot of foreign groups booked in for the season, and they did not cancel – probably because they had not heard the news.”

Eighteen months later and it is time to move on, McGettigan told The Irish Times on Tuesday, as he announced the rebranding of the Regency as the Bonnington Hotel.

The McGettigan Group, which owns the hotel, is celebrating 30 years at the Swords Road location this week. “We have been planning a major upgrade for a few years and hope to become a four-star property by early next year,” McGettigan said.

Last year’s shooting and the subsequent closure of the hotel as a crime scene are estimated to have cost the group hundreds of thousands of euro. In January this year, after trading difficulties, the hotel was put into examinership. In May an investment by Broadhaven Credit Partners, the alternative lender comprised of the US private-equity giant Bain and the Irish financier Dermot Desmond, of about €28 million has allowed the hotel to continue trading and to proceed with the refurbishment. The plans include adding 200 rooms in the future.

Current work includes a complete upgrade of the hotel, which has already begun. A new ballroom will cater for up to 800 people. Over the past 30 years the Regency had hosted numerous large entertainment and dancing events, and McGettigan says he hopes to continue this tradition. The spa will also be enlarged.

The Bonnington name is taken from a hotel the McGettigan family hotel group owns in Dubai, the Bonnington Jumeirah Lakes Tower Hotel, and a previously owned hotel in London, also called the Bonnington.

Six of the 10 McGettigan siblings are involved in the hotel and restaurant business. Hotels in the McGettigan Group include the North Star Hotel and the Address on Amiens Street, in central Dublin; the Kingswood Hotel in Citywest, in west Dublin; the Ambassador Cork; the Clanree and McGettigan’s Hotel in Letterkenny, Co Donegal; the Royal Hotel in Bray, Co Wicklow; the Millrace Hotel in Wexford; Limerick City Hotel; and the Bonnington Dublin; and the Bonnington Dubai.