Foreign customers are in short supply, but the Irish are spending again 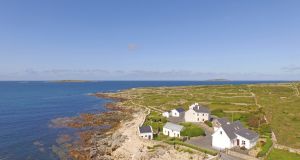 “Something special”: Bru na Mara in Carna, Connemara, a collection of holiday homes, for sale for €800,000 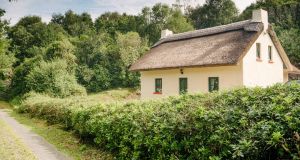 “Likely to find a buyer quickly”: Thatched cottage in Drimnamore, near Sneem, Co Kerry, for sale at €245,000 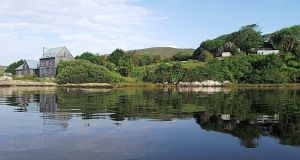 Ireland has long been a top destination for American and British holidaymakers. But changes in currency rates coupled with a reluctance to travel have taken its toll on the country’s holiday home market.

Brexit has directly affected a certain number of sales in his region, says Steve Symes of Green Valley Properties in Bodyke, Co Clare.

“There are a lot of ‘blow-ins’ like myself in this area and it has always attracted people from Britain,” he says. “But, since Brexit, some sales fell through. I had one lovely stone cottage, [Barleycove] outside Scariff, which was almost sold. But after the Leave vote, there was suddenly a 15 per cent drop in sterling. So the buyer pulled out immediately.

“However, I am hopeful that 2017 will see a reversal of fortune relating to Brexit as I am starting to get more enquiries from the UK – people who wanted to remain in Europe and, now that a Leave is imminent, they want out. Some don’t like the atmosphere, some are married to Europeans, and others just want somewhere peaceful to escape to, so are immediately looking at Ireland.”

The real impact has yet to be felt, says Majella O’Sullivan of Kenmare Properties in Kerry. “Our biggest market for holiday homes in Kerry is from the UK. And Brexit did cause problems for us last summer, but that calmed down and everything stabilised. However, I don’t think we can estimate how it will affect us in the long term, as no one really knows what is happening yet.”

Interestingly, “the most obvious effect is that UK buyers used to be interested in the mid- to high-end properties, but are now cautious about spending money”. Instead, they are looking in the lower price ranges for holiday homes, with three-bed semi-ds selling for about €150,000.

According to O’Sullivan, this is “traditionally what most Irish buyers were interested in – even though, to be honest, not many of us have been purchasing second homes, as since the crash people are reluctant to spend money. Hopefully, though, this year will be different.”

Says Elaine Daly of Sherry Fitzgerald Daly: “Properties at the lower end of the market are also moving quicker in Kerry. And while there is always interest in places to do up, many properties have been sold while prices were low. So we have very little of that type of stock at the moment.” A thatched cottage in walk-in condition at Drimnamore, near Sneem is for sale at €245,00 and will likely find a buyer quickly, she says.

Larger and more expensive holiday homes are taking longer to sell. In Sneem, Mermaid Isle is a seaside spread with two houses, two slipways, two hot tubs, and 4,000 feet of waterfront. Owned by an American family, Mermaid Isle has been on the market for nearly a decade, and the eight-bedroom home is currently asking €2.5 million – down from €7.5 million in 2008.

Foreigners are still in the market; Sandy Island in Baltimore, Co Cork has just been sold to a US buyer.

“This six-acre property was just sold last week to an American man for close enough to the asking price” of €350,000, says Charles McCarthy, a negotiator based in west Cork. “Spanish Island was also sold to a UK buyer, so there is definitely a surge of interest in Ireland now that the dust of Brexit and the US election has settled a bit.

“And, to be honest, those who say they are waiting for currency rates to rise will never buy something, because at the end of the day you can’t second-guess the pope; you just have to get on with life.”

In Wexford, Ciara Slattery of Warren Estates in Gorey says most of her holiday home clients are Irish and specifically from Dublin. “Things are definitely looking up in the holiday home market, with strong demand from Dubliners looking for somewhere near the sea. But we only get a handful of properties with a sea view every year and they get snapped up really quickly.

“Other than that, much of the interest is price-driven, with the most popular being holiday estates in places like Ballymoney or Sandycove, where a three-bedroom house will go for between €150,000 and €200,000. So although this sector of the market took a hit a few years back, I would say demand is on the rise for good, quality second homes.”

With coastal properties around Ireland ranging in price from €130,000 to €300,000, Steve Symes of GVP, which specialises in rural locations, has handled holiday homes for under €100,000. He says there are bargains to be had for anyone who doesn’t require a modern turn-key home.

“Despite the fact that the economy is picking up, there are still some really affordable properties out there,” he says. “I have one one-bedroom property in Bodyke [in Co Clare] for €99,000, which would suit anyone who doesn’t mind wallpaper from their grandmother’s era, and another end-of-terrace in the lakeside village of Mountshannon [Co Clare], which is asking €89,000. So there is still some great stuff available.”

Many buyers want properties in need of refurbishment, says Adrian Mangan of Sherry Fitzgerald, Mangan in Clifden, Co Galway. They will also compete for derelict or ruined cottages in areas where it would be difficult to get planning permission for a new house. That explains the asking price of one property on Mangan’s books: a ruin overlooking Ervallagh beach for sale at €395,000.

“This property comprises the ruins of an old stone cottage with views to Errisbeg hill and towards Roundstone village,” he says. “Because the walls and gables are still intact, the grant of planning permission to reinstate the building is greatly enhanced. This also means that buyers with no immediate connection to the area have an opportunity to purchase the property, as usually on ‘greenfield’ sites, planning permission is confined to locals only.”

This is obviously welcome news, as Connemara has long been a favourite for both Irish and foreign buyers willing to pay handsomely for stand-alone properties with sea and mountain views. Like his colleagues across the country, however, Mangan says holiday properties are few and far between due to high demand and planning restrictions.

“Demand in this area has always been strong with Dublin-based buyers, and record prices have been paid in the Roundstone area over the years,” he says. “But in line with the rest of the country there is a noticeable shortage, including homes in need of refurbishment. And that problem is compounded in the Connemara area as a result of the enormous difficulties in obtaining building permission due to the area’s designation as a Special Area of Conservation.”

Meanwhile, no buyer has yet emerged for Bru na Mara in Carna, Co Galway. This collection of houses on a coastal lot with an asking price of €800,00 is on the market through Celia Lamb of Ganly Walters.

One solution to such large properties maybe to split the cost between a number of purchasers.

“This property is something special, as it is located in the most beautiful peninsula and set on over 20 acres,” Lamb says. “The current owner was born there in what was an old farmhouse and over the past 10 years has renovated it and the accompanying outhouses so there is now a five-bedroom main house, with two apartments. On top of that, there is also a four-bedroom house and a two-bedroom cottage.

“It is so close to the sea that if you threw a stone from the front-room window it would land in the water. So it is a magnificent place for holidays and would be ideal for an extended family to purchase together and split the cost.

“I have already sold holiday/second homes in the price range of €400,000 for a property in Connemara up to €3 million house for a house in Cork,” Lamb adds. “So we are definitely seeing more interest, even from the Irish overseas, who use them for holidays with the plan to eventually retire home to them.”

Observes Charles McCarthy: “We’re not back to boom times yet. But we’re still selling, and there’s a lot of money in Ireland now, so things are looking good.”