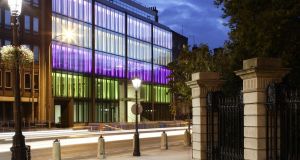 The combination of the €1.34 billion sale of Green Reit and a swathe of so-called “mega deals” carrying values in excess of €100 million apiece helped propel the level of investment in the Republic’s commercial property market to a new record of €7.2 billion in 2019.

That’s the finding of the latest research from real estate advisor CBRE on activity in the sector for the 12-month period to December.

While the report notes a reduction in the overall volume of investment deals when compared to 2018, the combination of the Green Reit sale to UK-headquartered Henderson Park Capital and 18 transactions extending to more than €100 million served to drive the value of activity in the sector to an unprecedented level.

The €7.2 billion figure recorded for 2019 represents an increase of nearly 64 per cent on the previous €4.6 billion record spend by investors on commercial property in 2014.

A further examination by CBRE of investment activity for the last decade shows that just under €29 billion in sales were completed in the Irish market.

Among the other major deals completed in 2019 were Starwood’s sale of Project Cedar, a portfolio of five prime Dublin office assets including the Watermarque Building, to Blackstone for more than €530 million; Marathon Asset Management’s €285 million sale of the 815 rental homes in the “XVI” (16) portfolio to Ires Reit, and the €240 million sale by Pat Crean’s Marlet Property Group of the “Sorting Office” office scheme to Singapore-headquartered real estate investment trust Mapletree.

CBRE’s analysis of the market shows that 74 per cent of investment spend in the year emanated from overseas investors.

The impact of the Green Reit sale saw office investments account for 51 per cent of overall spending. The ongoing and exponential growth of the private rented sector (PRS) was reflected in more than €2 billion being spent by institutional investors on existing and build-to-rent (BTR) residential schemes. These represented 33 per cent of investment spend in the year.

Commenting on the figures for 2019, Kyle Rothwell, head of capital markets at CBRE, said: “Activity in the Irish investment market exceeded expectations in 2019 with strong investor appetite for many of the assets and portfolios that were offered to the market. CBRE were delighted to have been involved in some of the trophy transactions concluded during the year.”