What's the best way to store things in a small space?

Design Dilemma: Blogger Siobhan Lam was going up the walls with clutter until she came up with this idea 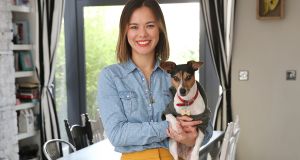 Siobhan Lam, founder of interior store April and the Bear, at home in Portobello

Like most Irish homeowners, Siobhan Lam, founder of interior store and lifestyle and interiors blog, April and the Bear, and husband Jamie Huges found themselves with so much clutter “we couldn’t walk from the kitchen to the hall without tripping over decade-old Converse or having to straddle stray bikes”.

So they decided to convert the alcove to the left of a chimney breast in the living room of their Portobello home into floor-to-ceiling storage. They used thinly veneered white MDF sheets and the original idea, says Lam, “was that the doors of the cupboard would be flush with the chimney breast and because they too were white, the cupboard would subtly meld into the white walls of the room and no one would notice and all would be well.”

However, according to Lam, “the end result just looked weird. The doors were kind of shiny and their white colour wasn’t the same as the walls and strangely looked kind of greenish. All in, it looked completely random and was the first thing you saw when you walked into the room.”

Instead, they decided to cover the doors with the boldest wallpaper they could find. “We chose Studio Job l’Afrique wallpaper which is mental and definitely not for everyone but we love it. We applied just like normal wallpaper with paste and a brush and it gives the room so much personality and makes a real statement, also because of the colours in it. It brings the room together in a really cohesive yet fun manner. It’s such an easy way and cheap way to make a design statement out of an otherwise bland corner.”

The couple also decided to go for broke and took down the mirror hanging over the mantelpiece and replaced it with brackets to hang one of their bikes. “Now not only does the Dyson and the piles of runners have a home, but we’ve cleared up space in the hall form where the bike used to live too.”

Bring on the bells at bijou crib on Brabazon Square for €230,000

Here’s my pick of wines to try this weekend: 11 reds, whites, rosés and fizzes
9