Welcome to Bloomfield: a touch of Mayfair in Donnybrook 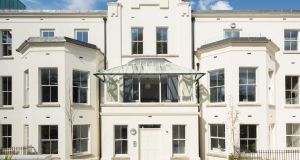 Knightsbridge-based interior designer Karen Howes has stamped her signature style on to more illustrious London addresses then you’d find on a Monopoly board. Her company Taylow Howes was once one of the go-to designer for Irish developers looking to impress buyers in boomtime Dublin, but then the recession hit and the Irish stopped calling.

That was until Galway builder Gerry Barrett approached her last year with a new project: to redevelop Bloomfield House, an historical Georgian building in the heart of Donnybrook. The developer had already built scores of homes on the adjoining site at the height of the property boom, launching Edward Square back in 2006. While the apartments and mews homes sold quickly, it took some years for the showpiece homes on the site – vast stucco townhouses – to find buyers. Barrett, a former teacher from the west of Ireland, developed a taste for lavish interiors in his schemes. When he built the G Hotel in Galway he commissioned the renowned milliner Philip Treacy to design the interiors to dramatic effect.

“I jumped at the chance to work in Dublin again,”said Howes. “Not just because I adore a good restoration project, but I love working with Irish architects and local craftspeople – they just bring so much energy and vision to the party. ”

The mission involved restoring the listed 18th-century building, which was once owned by the family of Irish nationalist Robert Emmet. It was sold around 1812 to the Religious Society of Friends – also known as Quakers – who ran it as a hospital for the elderly and those with mental health problems until 2005 when the facility was moved to Rathfarnham.

The house and adjoining buildings have now been converted into 12 distinctive apartments which are for sale with prices starting around €1 million. The challenge, says Howes, was “respecting the heritage of this high-society house and working with the conservation office while ensuring the apartments had all the modern-day bells and whistles that buyers of this level would expect”.

Walking through the almost-finished complex, it’s clear Howes has struck a good balance between elegance and glamour, heritage and tradition. There’s a sense of solidity and space about the apartments, which are sizably bigger than your average home, extending from 98 sq.m to 149 sq.m (1,055 sq.ft to 1,600 sq.ft.).

“We were lucky we have so many original key features – such as high ceilings, original fireplaces and the vast sash windows – to work with, as this instantly gives the apartments a light-filled and airy feel. Often you have to rely on mirrors, reflective textures and design tricks to make spaces feel bigger but we didn’t need any optical illusions in Bloomfield. It’s definitely one of the advantages of buying a converted apartment rather than a new build, fireplaces are such a rarity these days.” says Howes.

One of the most striking design choices is all the solid wood internal doors – they are monolith-like in size and feel, with polished chrome ironmongery and a beautiful diamond patina, “they’re a nod to the solidarity of the building and a taste of what’s to come when you open the first one,” says Howes.

What does follow is a very inviting space, set against a backdrop of neutral stone walls and fittings and a wide-plank oak floor, which adds a homely warmth to the scheme. “I was mindful potential buyers could have all types of furniture, from modern to antique and different genres of art, so we just kept the colour scheme muted and added pops of dusty blues as our accent colour on the upholstery, curtain trims and cushions,” says Howes. A few select brass accessories and light fixtures also add a dash of gilt edge glamour and just a hint of mischief to the scheme too.

Another striking feature is the bespoke SieMatic kitchens. “We chose a light taupe finish for the cabinets to complement the tones of the Corian textured worktop. And we used the same finishes on the island top, which wraps around the side to complete the sleek look I was aiming for.” Howes also insisted the architects factored in a decent utility room in each apartment: “I hate nothing more than having to sit in your living room and listing to a washing machine go crazy on a spin cycle. Plus, we all need a little room you can just toss load of stuff into if guests arrive unexpectedly.”

On another practical note, Howes made sure there was a lot of storage space with some apartments boasting walk-in wardrobes, and others with wall-to-wall units in the bedrooms. “We added fine detailing on the fitted joinery to up the spec in the master bedroom - high gloss lacquer frame, brass trim, and woven suede upholstered panels which give a really luxe feel. That particular wardrobe finish has become a bit of a calling card for us in London and everyone always comments on it,” says Howes.

The design touches keep on coming in the bathrooms too, which are clad in light Statuario marble and darker accent Negev Taupe stone on the vanity units, a combination which looks both classical and contemporary.

“Gerry really wanted to create a new chapter in the life of these beautiful buildings, but he also wanted us to bring a slice of Mayfair glam to Donnybrook and I think collectively we’ve managed fused the past and the future together quite nicely,” says Howes.