'What do you think of my chimpanzee muff?'

The American artist David McDermott, is one half of the artist team 'McDermott and McGough'. His life and art revolve around the past and this is evident from the contents of his home, Bellmount House in Mullingar, Co. Westmeath. Video: Bryan O'Brien 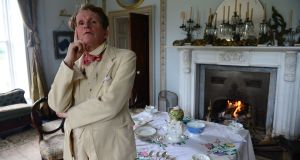 David McDermott at Bellmount House: “This experiment is not perfect, but it’s on the way to being perfect.” Photograph: Bryan O’Brien 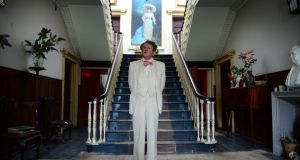 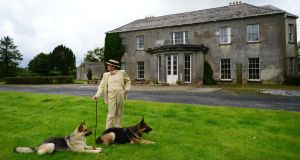 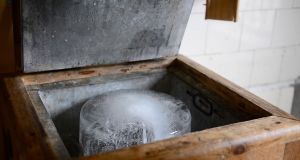 An old ice box stocked with ice from the freezer. Photograph: Bryan O’Brien 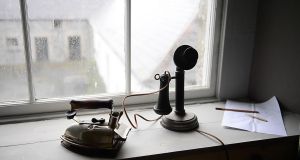 Artist David McDermott wants to show me something. I’ve seen a lot already in the rambling rooms of Bellmount House, near Mullingar, which McDermott has turned into a kind of Gothic art installation, rooted in the Victorian era. I’ve seen a rodent, which is unsurprising, because this is a house with a lot of hidey holes and gaps in the walls. I’ve seen the commodes that are in every room, and that McDermott chooses to use instead of a flushing toilet. I’ve seen the cubby hole upstairs that is earmarked for “the servant” to sleep in, once someone suitable is found for the role. I’ve not yet seen one of the many bats I’m told are constantly falling down the chimneys or roosting behind mirrors or in the folds of the, formerly grand but now torn, window drapes, and I’m rather hoping I won’t.

“Look,” McDermott instructs. I’m looking. He’s holding a tall cylindrical box, which he opens with a flourish. What emerges is a floppy piece of shiny black fur. It’s a muff, with which, at one point in time, ladies used to keep their hands warm. McDermott bought this vintage muff in its original box long ago in New York. “Chimpanzee,” he says, stroking the object.

The muff made of chimpanzee fur is just one of the many esoteric objects crammed into every room of Bellmount House. American-born David McDermott, who collaborates with his New York-based partner, Peter McGough, in various photography and installation projects, has been renting the house for close on two years. He has been gradually bringing it back in time, to reflect the fact he chooses to live a life that has as little to do with modernity as possible, “the arrestment of time,” as he puts it.

So he uses a modern freezer to make ice to create an old-fashioned icebox? I ask if this doesn’t seem like a contradiction. “I’m using and abusing the present to get to the past,” is how McDermott explains it.

It’s not just the feather mattresses, the commodes and the clothes McDermott wears that are from another era. His turn of phrase also has a period ring to it:

“Shall we alight the stairs?”

“I don’t drive an automobile.”

“This is a temporary abode. It is the conclusion of my second summer here.”

The house came unfurnished, which was fortuitous, because McDermott has an abundance of furniture and objets d’art. Each room has a multitude of things in it. There are pieces of rococo frames, porcelain, card tables, mirrors, candelabras, chairs with the stuffing falling out of them, rolls of hand-painted Chinese silk wallpaper, small bright-coloured birds under glass domes. They are just the objects on show.

Chests of drawers, wardrobes, armoires and cupboards contain many, many more items. One drawer is full of antique neckties. Another is full of women’s Victorian hats and hoods, one of which McDermott decides spontaneously to model, doing a little twirl in the process. “All these things are my friends,” he confides, patting a hat as if it were a small pet. “I have conversations with them. I don’t need human friends when I can have discourses with these things.”

He opens door after door, drawer after drawer. There are trays of birds’ eggs, cupboards of porcelain dinner services, antique bedding, children’s clothes, a man’s Victorian two-piece bathing suit, made of wool, and full of holes. “Moths,” he says sadly, shaking his head. “They took my vintage sock collection too.” The armoire in his bedroom, which has stuffed toys on each of its twin beds, contains vintage tweeds and trousers from the 1920s. And all this is only part of his vast collection. “I have 10 containers in storage at a facility where myself and the Natural History Museum are the only clients.”

There is a gun cupboard with no guns in it, and drawers that are meant to hold duelling pistols. “I haven’t found any of those yet,” he says regretfully. There is also a huge piece of a broken glass chemistry test tube the size of a downpipe, which he found in a skip outside a building in Trinity College and carried back to Mullingar one recent afternoon on the Sligo train. “I saved its life,” as he puts it.

Bellmount House has many rooms. Does McDermott have anyone to help maintain it all? “In terms of housekeeping, I would do it when it’s needed,” he says. “I would like to have a servant. I’ve had them before. But I don’t believe in paying them. That’s for the middle classes. A real servant is a devotee.”

As McDermott doesn’t drive an automobile, he has come up with his own solution to getting out to the shops, which are three or four miles away. “I have a wagon on wheels that I pull into Mullingar once a week to go shopping. I find some shopkeepers are more gracious than others.”

When he moved in, he was driven demented by the carpets and lino that covered every floor. They are now relegated to the attic. The original stone flags in the kitchen have been revealed. The disappearance of floor coverings have made an already cold house yet colder, but he just wraps up more warmly in his vintage tweeds in the winter. He’d love to take the radiators out, which he never uses, but as he is only renting, he considers that would be unwise.

He tolerates the electricity, but shows me how he has painted the sockets and plugs brown to look like Bakelite. He has made a decision to never wash the windows, because he doesn’t think there is any point: “it’s not the original glass.” He’s painting the rooms dark russets and ochres in chalk-based paint to give them a period look. He cannot abide a plain white wall. “White is a non-decision for people who don’t understand colour.”

McDermott estimates it will take him 10 more years to get the house the way he wants it. “This experiment is not perfect, but it’s on the way to being perfect.”

Before I leave, he asks if I would like to see his gravestone. It’s outside, not far from the front door; a tall piece of carved stone with his name and date of birth, and those of his partner, Peter McGough. Their epitaph reads, “The discoverers of de-aging and life everlasting.”

The Solomon Gallery will be showing David McDermott’s photographs of Russborough House, which were printed using the period Van Dyke method, from September 2nd to 10th. A portion of the proceeds will go to the Beit Foundation. See solomonfineart.ie