The story of Ballymaloe: Normans, royals and tomato chutney

A new book charts the 1,000-year history of the grand country house 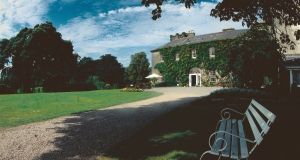 If contemporary Ballymaloe House can be summed up in a single personality it must be that of its doyenne, Myrtle Allen. It can’t be often that a glut of tomatoes in the early 1940s leads to the glamour of what has remained Ireland’s headline country house hotel; even more unlikely must be the initiative which transforms an ancient fortified farmhouse into a Michelin-starred restaurant. Yet faced with all those tomatoes, radiant rejects grown by her farmer husband Ivan and refused by the local markets, Myrtle Allen decided not on defeat but on chutney.

“Yes, it was chutney,” says Rory Allen. “It was later decided to describe it as relish as that was more marketable, but it was always chutney in the family.”

The sequences of families described in Ballymaloe: The History of a Place and its People by Jane Hayter-Hames come to what seems like a natural termination with the current adult Allens; that is until the reel of grandchildren begins to unspin and suddenly it’s back to the future.

Yet few visitors enjoying the sunlight in the conservatory of this famously soothing building will reflect either on the seasonal crises of farming produce or on 1,000 years of struggle and survival which preceded the coming of the Allen clan. This is why Rory Allen and his wife Hazel decided to sponsor this book. “It’s a house which has been here for such a long time that we wanted to be able to show where it began, how it developed, and we asked Jane to get as much of its history as possible between two covers.”

That’s what Hayter-Hames has done, and the Allens of Ballymaloe don’t appear until at least three-quarters of the way through her chapters.

Instead, it’s the house itself, with maps and plans charting its site, size and changes from its pre-history in these townlands of Cloyne and Shanagarry.

With Christianity, the farm at Ballymaloe became part of the church lands at Cloyne, so much so that its modern name derives from the saint Mo Lua. The townlands of east Cork and with them Ballymaloe’s hinterland of Imokilly succumbed to the Norman invasion, although, as Hayter-Hames writes, “The land ownership records are sparse for the thirteenth century but sure enough, when Ballymaloe next appears in the records the owner has a French name.”

Adventurous chapters record the building of the fortified tower-house at a time of rebellions, executions, burnings, plague and famine with a cast of Elizabethan characters from the earls of Desmond and Ormond to the queen herself along with Sir Francis Walsingham, Sir Walter Raleigh and William, Lord Burghley. This was more than a local war; according to Hayter-Hames it was a war for control of Ireland, fought viciously here among the towns and meadows of east Cork.

Wealth, status and royal approval encouraged an instinct for hospitality in the surviving family at Ballymaloe, which emerges as a house open, if not yet to the world, at least to its neighbours.

The replica of a medieval harp displayed at Ballymaloe and stone inscriptions commemorating a knighthood conferred in 1603 still distinguish the older buildings where then, as now: “A team of professionals ran the large household. In the evenings the rippling melodies of the harp filled the dining hall as red meat was eaten, wine was poured . . .”

Both families were friends of the artist Patrick Scott, whose influence on the Allens and their home is still evident today.

Changes in the household allowed the letting of a wing for holiday rentals. Expansion in farmland and productivity brought a greater variety of food to the kitchen.

Even though a local priest actively obstructed Myrtle’s candidacy for president of Macra na Feirme in 1959, involvement in local and agricultural organisations committed them to their rural neighbours, and when the six Allen children were at boarding school, Myrtle thought it might be a good idea to combine all her interests and resources in running her own restaurant. So she did.

Always visionary himself, when Ivan retired from farming he became more involved in enhancing the ever-growing reputation of Ballymaloe as a hotel as well as a restaurant.

Now Rory Allen manages the farm with son Darren, Hazel manages the house, its rooms regularly refurbished and freshened and holding fast to the philosophy described by Hazel, that Ballymaloe is not run by fashion but by quality.

Emphasis on the future

So far there is the shop and its café inaugurated by Wendy, Yasmin began the Ballymaloe Relish outlet, Fern presided over the Crawford Gallery cafe in Cork. Tim designed new buildings and married Darina who introduced the Ballymaloe Cookery School. Her brother Rory O’Connell took over as head chef in the restaurant. There were the television series, the role of Rachel Allen, the stream of books, the introduction of farmers’ markets and support for slow food, the Literary Food and Wine Festival, the Grain Store venue.

Ballymaloe House still sits like a benign beacon promising the very best the Irish countryside has to offer. As this book proves, it just took the Allens to bring it all together. Ballymaloe: The History of a House and its People by Jane Hayter-Hames (Rushford Publishing) € 25