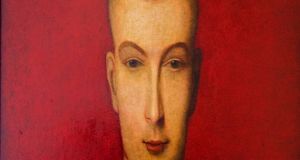 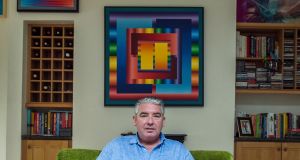 John Cunningham at his home in Ranelagh with one of his favourite paintings by Francis Tansey. Photograph: Brenda Fitzsimons 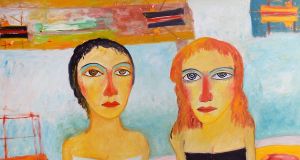 A John Bellemy painting from the collection of John Cunningham. Photograph: Brenda Fitzsimons 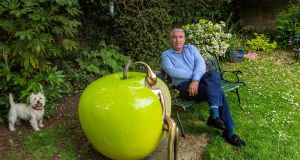 Along one of Ranelagh’s leafier secluded roads, beyond the railings of a modest semi-detached house lies a virtual Aladdin’s Cave of art and sculpture. It’s the lifelong collection of John Cunningham, a businessman and patron of contemporary art in Ireland, who together with his wife Audrey, have made their home a gallery of delights.

The outside world falls away, and the usual domestic layout is transformed by a panoply of art and sculpture on every wall and surface. Cunningham is clearly proud of the collection, as though he has lined up all his children for introduction to a visiting aunt. What’s most endearing is that he is bursting to show off each piece – and when you point to a new one he beams with delight that you’ve spotted that one, so he doesn’t have to.

Meath-based sculptor and friend Orla de Brí is a clear favourite. A bare fibreglass tree in the garden with a typical de Brí female bronze figure perched on the branch is playfully referred to as “the bitch in the birch”. In the corner, another de Brí figure sits comfortably in a very sizeable apple. Slightly obscured under a willow is a small bird atop a giant egg, Waiting in anticipation, by Ian Pollock.

Back inside, a visitor could happily spend hours pouring over the fine mix of art and sculpture that Cunningham has accumulated over the years. Though much of it is Irish and contemporary, there are paintings from Haiti, Cuba, Burma, Austria and Russia. The Irish works include Francis Tansey, Ken Browne, Graham Knuttel, Marie Theresa Keown, Nicole Etienne, and the late Joe Sweeney, a retired teacher who Cunningham first discovered many years ago when he paid just IR£60 for one of his works. A later painting, Coralea Road, Roscommon, shows clearly the artist’s growth.

“I buy with my eye. I have never tried to put together a collection as such. I have stuff from the railings on Stephen’s Green and from the best galleries in town. It’s about throwing things together and seeing how they work.”

Cunningham clearly has a knack for making disparate pieces work together, and knows how to hang art without making the house resemble a huckster shop. Above all, he’s passionate about the democratisation of art – if you love a piece, then it’s right for your home.

Cunningham is now spearheading a campaign with IMMA to raise substantial private funding for contemporary artists in Ireland. Having been an individual member of IMMA for years, in 2014 he attended a Business Arts presentation in RTÉ where Sarah Glennie, director of IMMA, clearly outlined the implications of gradual dramatic cuts to their funding. The key message was that for every € 100,000 taken out of the arts funding budget, it has a direct impact on the artists. And the likelihood would be that artists could no longer live and work in Ireland.

Distressed at the prospect of losing a generation of Irish artists and the impact on our contemporary culture, Cunningham suggested a solution whereby 1,000 people would be asked to give € 1,000 each to create a € 1 million fund to directly support contemporary art and artists here. The money will go directly towards funding residencies at IMMA, individual exhibitions and acquisitions for permanent collections.

Cunningham’s greatest concern is that we might lose that connection with the arts that was once simply inherent in our culture. He feels strongly that Ireland and the Irish are culturally better endowed than other nations. “We certainly punch above our weight, and that tradition of storytelling and singing resonates with visitors all the time. The essence of us as Irish people is ingrained in the arts. How we value art and artists is a demonstration of how sophisticated we are as a race. We don’t want to lose a generation of artists through neglect.”

It is hoped IMMA 1000 will not only raise substantial funding for living artists but also inspire more people to engage with the arts.

“It’s easy, don’t be intimidated. Google the top five galleries in Dublin, put your name on their exhibition list and get invitations to launches and openings. Go along. You’ll come away somehow cheered and inspired. The Lucien Freud exhibition is coming to IMMA in the autumn. How often on a Sunday do you wonder what to do? Get on the bus, bring a picnic, it’s free.”

And what about the argument that the enjoyment of art is a luxury only afforded by the privileged classes. “Art is not a luxury. For € 100 you can pick up something you adore on a park railing. Many galleries will allow you buy in instalments. If people can spend several hundred euro on a dress or a bag – and they do – art is accessible for anyone, and the joy you get from it is for life.”

“In the context of art and learning, art plays a huge role in informing who we are, where we are and potentially where we are going. It creates an opening of the mind, giving a sense of the wider world, and that there’s more than yourself.”

John and Audrey continue to explore new places and discover new art, and have always encouraged their children to engage with it too. One neat trick Cunningham advises when visiting a vast museum with a young child is to invite them to take a quick look around and pick out a favourite piece. “You could spend 20 minutes with a child talking about one image once they love it. It’s much better than dragging them reluctantly around the entire space.”

In his day job, Cunningham loosely describes himself as working in financial services, but it’s a blanket term for numerous pursuits. After more then 20 years in marketing and business development with Irish Permanent and Friends First, two years ago he joined global human resources consultancy, Alexander Mann Solutions in the UK. He is also a founding shareholder and director of CheckRisk, an online risk analysis programme for financial services.

Somewhere along the way Cunningham also committed to setting aside time and applying skills to helping others. He is chair of the Immigrant Council of Ireland and behind the ‘Turn off the red light’ campaign which seeks to criminalise patrons instead of sex workers themselves. He sits on the board of the Irish Youth Foundation, and was the progenitor of Brand Haiti Project on foot of an event organised by Denis O’Brien a few months after the massive earthquake in 2010.

Have yourself a home-spun Christmas
Real news has value SUBSCRIBE