With a portfolio that includes 463 stores,Wexford-born architect David McNulty must reflect the global designer brand’s individuality in every shop

David McNulty from Co Wexford studied architecture in UCD before moving to Paris. He now oversees the design of 463 Louis Vuitton stores around the world, which need refreshing every six to seven years.

Interiors of the Miami beach house

The Louis Vuitton headquarters in Paris is a very grand 19th century building with an imposing glass and marble entrance located beside the city’s oldest bridge, the Pont Neuf. The fourth floor houses its extensive architecture department headed by the Irish architect David McNulty who has masterminded its growth over the past 20 years since he joined in 1996.

His spacious office overlooks one of the city’s landmark buildings, the Art Deco former department store Samaritaine which is now owned by LVMH and is being converted into a 68-room luxury hotel by the Japanese Sanaa group and due to open in 2018. McNulty heads an inhouse team of 40 at Louis Vuitton, half of whom are architects from France, Australia and the US with one from Ireland. “I am into stores – everywhere we sell product – so every type, small and large, is designed here and managed out of these offices,” he explains.

McNulty is dressed stylishly in black with one arm in a sling broken from a fall off a ladder – yet quick to make coffee with the other. His portfolio is 463 stores around the world which need refreshing every six to seven years. “We are reaching a cruising speed where we can do upwards of 50 projects a year,” he explains. That includes the enlargement of its presence in Brown Thomas, due to open officially next Wednesday, as well as the more monumental revamping of its modernist Miami building.

“If you don’t change in retail, you die. There is a constant flow of work and architecture is part of the overall perception of what the brand stands for – workmanship, long-lasting heritage and durability. Vuitton was very inventive after all.”

From Gorey, Co Wexford, the son of an engineer, McNulty grew up admiring what his uncle, an architect in Belfast, was doing “and you evolve from that”. Having graduated in architecture from UCD in 1985, he moved to Paris, largely because of the influence of a visiting professor of architecture, the Paris-based Peruvian Henri Ciriani. 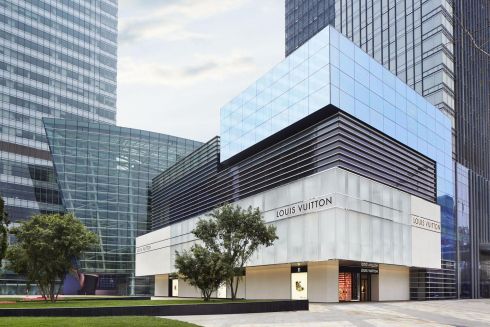 After several years which included a stint doing set and exhibition design, he joined Louis Vuitton in 1995.

“At the time it didn’t have an architectural point of view, but Marc Jacobs was the catalyst [introducing more lines] and Yves Carcelle [the late former chief executive of Louis Vuitton] was fascinated with architecture. Because there was more product, they needed to have bigger stores and had to up the ante. So they got me and I quickly built a team and the projects came rolling in. Everything converged,” he says.

Since then, he has built up an impressive international network of designers, architects, artists and style leaders like Peter Marino, for instance, with whom he has worked for the past 20 years. “It has taught me a lot about dealing with facades, with envelope design, how to make the customer feel comfortable. We used to do big stores, but now we make them look smaller. In the past we would do cookie cutter stores – in New York or Sao Paolo – always looking the same with the same product, blah blah blah. Now we want interiors that are a little bit different for people who are travelling more (and don’t want to see the same thing). We want to introduce variety and some local touches. That is a big change and a general trend,” he says.

The work of his department, the biggest of any global luxury brand, has been the subject of exhibitions in New York, Tokyo and Berlin curated by Mohsen Mostafavi, the dean of the Harvard Graduate School of architecture and celebrated in a book published by Rizzoli called Louis Vuitton Architecture and Interiors. His spectacular designs for retail environments earned him the Architecture Alumni Award from UCD last year presented by Prof Hugh Campbell.

“Retail architecture is a real subject now,” says McNulty. “Who invests now? Governments less and less because they are broke, so the great new architecture is from public-private partnerships or private corporations. Paris was crying out for new things, but now you have the Frank Gehry building in the Bois de Bologne for visitors to see. We show a collection of furniture every two years in Miami Art in December. We want to be challenged, to get out of our comfort zones, create transportable, foldable furniture, for example and make a business out of it.”

He is particularly proud of a project realising the design of a 1934 beach house by Charlotte Perriand, a modernist French designer who worked with Corbusier and who believed the art of dwelling was the art of living. Originally conceived as a cheap holiday house, it was built and furnished by Louis Vuitton for the Miami Design Fair two years ago using her sketches, to the delight of her daughter Pernette (77). He would like to see more created.

Married to Catriona Merry who has a hand-knit accessories company Wisp-Paris, they have three children “in three different countries”. One is studying in the UK, another boarding in Ireland and one at home in Bastille where they live. What he loves about the work is that it is always changing and evolving. “Architecture can give fashion the means to express its identity. Fashion can be useful for architecture and fashion creators can reinforce their own identity through architecture. And we’d like to think we do something similar – that our architects benefit from the world of fashion.”