Take a class in colour co-ordinating 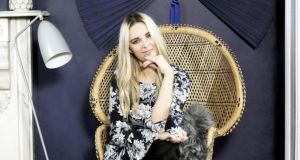 Interior designers always say paint is the easiest and cheapest way to update a room. However, getting the colourscape right isn’t easy and most of us have neither the time nor the finances to experiment.

Enter Moda by Dulux, a selection of co-ordinated colour palettes that enable you to buy into an off-the-shelf look and make it appear effortless. Dulux has selected five colours that work together, pairing warm shades with warm shades and cool colours with ones from that part of the colour wheel, to be layered as you like .

In the collection called Mineral Glow, for example, a deep marine blue called Gatsby Blue is teamed with a cool green called Tilbury Teal which, when set alongside a shade of grey called French Mist, modernises a grey room.

“It makes layering colours in a home context really easy,” says interior designer Suzie McAdam, who was pleasantly surprised at the effect the colour combinations had on her all-white livingroom. “Furniture and artwork become more vivid.”

McAdam works mainly on residential projects and, to date, has completed about 15, mainly period, properties. She has also done the interior for Stanley’s restaurant on St Andrew’s Street and the meeting rooms at The Wilde, 53 Merrion Square.

Her blog, thedesignseeker.blogspot.ie, has a faithful following. She has also acted as a retail design consultant on Feargal Quinn’s RTÉ show Retail Therapy and as an interiors stylist for shoots featuring in Image Interiors and the Gloss magazines.

The hues in True Romance show how to work pink in fashionable way, without veering into Barbara Cartland territory, while Coastal Calm works a sandy shade of yellow as its feature colour.

McAdam will be holding colour workshops as part of a Dulux event, Moda Style Pop Up, later this month at Drury Buildings in Dublin 2. The 40-minute workshops will provide help in finding the paint palette best suited to your home. She suggests that you take photos of the room or property you want to paint and figure out the orientation of each room – facing north, south, east or west – as this affects the colour of each paint group as well as features such as fireplaces and windows.

While there, you can also seek tips from fashion stylist Courtney Smith and make-up artist Aimee Connolly.