Pantry bliss: why the humble larder is the hottest new kitchen trend 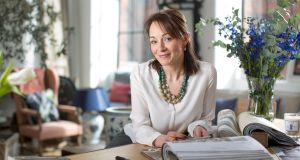 Could the humble pantry – the preserve of Downton Abbey sets and Enid Blyton books – be due a comeback? The kitchen island has reached Peak Status Symbol, yet if interior designer Sara Thompson’s creations are anything to go by, the pantry could well become an Irish home staple.

“The pantry definitely reminds you of years gone by,” she notes. “It used to be for the cold storage for a lot of provisions but can be a really practical solution in terms of accessing what you need. It’s a neat, but very clever use of space. Now, clients like to use perhaps an extra sink or dishwasher in a pantry. The thing about a kitchen island is if you’re entertaining guests, it can be unnerving to cook or tidy in front of everyone. The pantry means that most stuff in a kitchen can be done behind the scenes. That said, mine is purely for storage,” she adds with a smile.

As part of Belfast-based interior design company Thompson Clarke, Sara Thompson’s aesthetic runs counter to that of many of Ireland’s young design gunslingers. Where many designers seem to favour an industrial, minimalist, clean-lined look in Irish homes, Thompson is a huge fan of mixing up traditional period charm and statement antique furniture with a cosy, homely feel. And no surprise: she cut her professional teeth at Adam’s auctioneers, where she trained as a fine art valuer. These days, she is likely to be sourcing antiques, bespoke and one-off gems not just from local producers, but trusted suppliers in Paris, London, Stockholm and Morocco.

The company’s latest renovation project, a four-storey Georgian townhouse in Ranelagh with modern extension and kitchen conversion, needed a designer who would be sympathetic to the period charms of the house. The clients – a young professional couple with three children – wanted to showcase the house’s original architectural detailing, but needed a finish sturdy enough to withstand schoolchildren.

The end result is a divine marriage of modern accents, iconic furniture pieces and period details; among them, the Aga and the pantry. Elsewhere in the house, cornicing and ceiling roses are offset with Adam chandeliers by Richard Taylor. In the drawing room, understated window dressings are designed to draw the eye towards the fireplace; traditionally a focal point in Georgian rooms.

“As they were a young, modern family they didn’t want to be stuck with antiques that they wouldn’t use or be too heavy for them,” explains Thompson. “They were after a welcoming feel, but have kids tearing around on scooters in the house and snacking on sofas, so everything had to be wearable.”

The typical Thompson Clarke look is a juxtaposition of old and new; designing with the future in mind, but with a big nod to the past.

“The shell of the property had been extended and renovated five years prior, so Phase 1 was about getting them moved in with the necessities – after that we did it room by room.

“The kitchen was the last thing we touched,” adds Thompson. “We really had to question whether we would go modern or traditional but in the end we went for a Shaker-style, modern Modulnova kitchen [supplied by Living Space in Belfast] with a marble effect worktop.

“We sourced a farmhouse dining table and some wishbone chairs to really blend the traditional and contemporary. Because the kitchen was in the lower ground floor, we also needed to accentuate colours that kept things light and bright.”

In the drawing room, meanwhile, the neutral palette is the perfect backdrop against which to add colour and texture with fabrics, like the vintage rugs and William Yeoward Girda Bronze ottoman.

“In general, it’s about creating an interior that will stand the test of time, albeit with a little playfulness,” explains Thompson. “You don’t want a multi-coloured nightmare of pattern and colour. It’s all about balance – we would always say that nothing should match. Beautiful things go together quite easily.”

As to how to future-proof a mix of traditional and contemporary, Thompson adds: “Often, it’s a question of pairing objects against a relatively neutral background and getting the scale and proportion within the room right. It’s about creating effortless eclecticism. Choose your bigger items in neutral colours that you won’t tire of, and then bring in the fashionable colours and themes. Changing up some cushions or wallpaper allows you to change a room scheme quite quickly.”

“This big question is, ‘Do I love it? Can I live with it?’ It’s always a good idea to get good advice. I’ve forged good relations with suppliers in various pockets around the world, and they’ll be in touch to let me know if there’s a lovely piece I might be interested in. If you want to buy a quality piece, there has to be evidence of how well it has been made. In today’s market, people are overwhelmed with choice online and people get carried away buying items that look good in photos and get disappointed when it comes in the UPS in modular form,” adds Thompson. “To me, it’s so worth the time and money investing in antiques that have their own history and story. That’s very charming to me.”

In her own home along Belfast Lough, Thompson certainly practises what she preaches. Her passion for art and antiques is writ large throughout the house, and it wouldn’t be unusual to find modern lollipop chandeliers living side by side with Chinese cabinets, Kelin saddlebags and Eames chairs. Little wonder that the home was a finalist in RTÉ’s Home Of The Year earlier this year.

“We love the look of hotels designed by Kit Kemp, ” reveals Thompson. “She has a very vibrant look, and goes all out when it comes to fabrics. Because of the work I do in interiors, I did want to keep things neutral as I didn’t want to tire of them.”

One item that strays from the neutral palette in Thompson’s home is the orange cast iron bath: “The plan was to paint it down, but I love it,” she enthuses.

The Georgian-style home is in fact a new build on the site of her husband’s original family home. Thompson’s in-laws wanted to downsize their own home, and so an arrangement was made five years ago: Thompson, her husband Scott and their growing family of three children (aged 10, 9 and 7) would live alongside her in-laws Carol and Alistair, who now live in a separate part of the house. It’s the sort of multi-generational living arrangement, popular in days of yore, that is fast gaining traction again, says Thompson.

“Having grandparents on our doorstep, and being right there for them, felt very appealing to us as an arrangement,” she says. “It wouldn’t be unusual for me to find my mother-in-law working in the garden, or making jam and scones. We’re very, very lucky. The key of course is to get on well with the in-laws, but it’s something that I definitely see more and more of. Of the clients we are seeing, around one in 20 are looking for a similar arrangement.”

Overall, the house is packed with items Thompson loves, with a firm eye on being robust, family-friendly and practical. “Sometimes a room isn’t finished until you throw in three kids and a dog and see how it looks after that,” she notes. “We certainly don’t live in a museum. It’s not there to be admired and be a place where you have to keep your hands still in.”

2020 bargain cars: What to buy with a limited budget in mind
4

I’m Irish and I live abroad. Why have we been forgotten in Election 2020?
8