Lisa Godson: Time to create affordable spaces for our artists 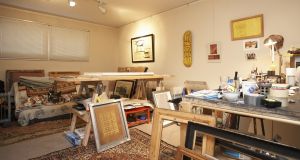 By one reckoning, almost 50 per cent of studio spaces in Dublin alone have been lost over the past couple of years due to rent increases or plans for redevelopment

At the simplest level, design is the deliberate shaping of the physical world. If we think of the numerous

factors that create the objects and surroundings of everyday life, we need to look beyond the profession of design towards other agents. In Ireland, the forming of the spaces where we dwell has been the preserve not only of architects, planners and urban designers but politicians, developers and of course “the market”. The values attributed to property in the Irish economy have seen some drastic side effects, including ghost estates, homelessness and, too often, a sense of near-helplessness among those whose working or living situation is precarious.

Among the latter group are artists. The cycle is a familiar one: when and where rents are cheap, artists congregate and set up studios. Often attracting other creative workers and innovative businesses, such areas become more fashionable, rents rise and artists are priced out. Look at Hackney in London or Brooklyn in New York.

The current uneven “recovery” in Ireland has had a severe impact on places for artists to work. By one reckoning, almost 50 per cent of studio spaces in Dublin alone have been lost over the past couple of years due to rent increases or plans for redevelopment. This is not only the disappearance of individual units, but entire buildings used by collectives of cultural workers, such as the Joinery in Stoneybatter, Block T in Smithfield and Broadstone Studios in Dublin 2. Artists are particularly vulnerable to the vagaries of the property market due to their low income – Visual Artists Ireland has calculated that 67 per cent of artists earn less than €25,000 per annum.

One initiative that may help create greater security is the formation of the group Creative Spaces Collective (CSC), which is seeking to have particular objectives enshrined in the Dublin City Development Plan 2016-2022. Its impressive and detailed submissions to the council contain a request that developments include a mandatory allocation of space to studios and art production facilities, alongside the zoning of particular areas in relation to culture and heritage. Sometimes taken to mean the consumption of exhibitions, heritage buildings or performances, CSC argues that “culture and heritage” should also include the production of art. It outlines the benefits of cost-neutral studios, not only in relation to the direct development of art, but in terms of the critical mass that accrues around creativity. It expresses this partly in terms of “attracting and retaining young innovators. The collective cites Berlin as an example of a “creative city” economy, where its development as a hub for art production has “attracted large numbers of innovators from related high-value fields such as design and digital media production”.

Another project that also addresses the precariousness of life as an artist is the abcd – artists building co-op Dublin – a group working with architect Dominic Stevens to develop and build apartment housing designed to serve the specific living and working needs of artists and other low-income cultural workers.

The design approach would be on the “shell and core” principle, where the architect develops the brief with the eventual owners to create the building’s basic structure, including communal and work areas. In this particular case, that is likely to include studios and production spaces, but might also include space for guests, a shared garden and social spaces. Once the shell is built, the plan is that each individual fits out their specific space.

While self-build is most commonly used for individual rural dwellings in Ireland, the abcd project is for an urban site, and for multiple occupants. This is a fairly common approach in Berlin, where one- sixth of all new housing is organised by baugruppe (building groups), and often includes the generous communal spaces typically lacking in developer-led housing.

As with abcd, building groups often share an interest or way of living – Stevens worked on one co-operative project in Berlin where single parents and elderly women constructed an apartment building involving both shared and private living spaces.

The architect cites the advantages of this approach in terms of affordability, and the chance to design and build to bespoke and higher specification than typical commercially-driven housing. While community consultation has been a feature of certain schemes such as the redevelopment/regeneration of Ballymun, the abcd project involves another degree of involvement by the residents, as they will be effectively designing their own “core” within the shell.

Modernist approaches to planning and designing residential buildings are often criticised as the imposition of a functionalist ideal on hapless residents: the original Ballymun development is the dystopian poster boy in an Irish context. However, as with most design projects, there were any number of “authors” for that and other failed schemes.

The attempted political interference with the apartment size regulations in Dublin in recent months sounded a clear warning. It cautioned that, yet again, when it comes to housing design, there is a danger that profit for the developer is privileged over the wellbeing of the occupants. Rather than feel powerless in the face of the market, the artist groups that are trying to influence the shape of the city, and trying to create their own homes, may well provide a new model of sustainable design in the broadest sense.

Lisa Godson is co-editor with JoannaBrück of Making 1916: Material and Visual Culture of the Easter Rising (Liverpool University Press)