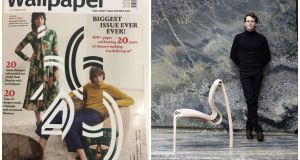 Wallpaper* magazine, a design classic; furniture designer Joseph Walsh who will speak at a Dublin design conference in November and whose work will be on display in Dublin 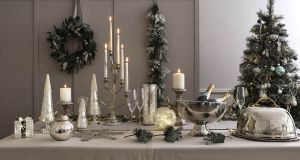 Hygge on the high street: the Christmas range at M&S has a Danish theme 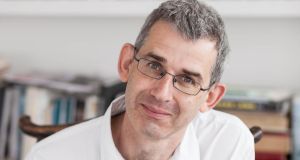 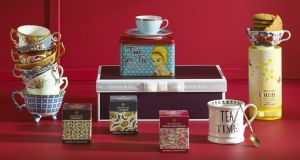 Edmund de Waal to give keynote at Irish design event

Author and ceramic artist Edmund de Waal and furniture designer Joseph Walsh will be the headline speakers at a two-day design conference at Collins Barracks on November 4th-5th. Mise Éire? Shaping a Nation Through Design, organised by the Design & Crafts Council of Ireland and the National Museum, promises plenty of interest. Among artists, designers and writers giving talks are sociologist Tom Inglis; Lisa Godson, a lecturer at NCAD (and occasional Home & Design columnist); glass artist Róisín de Buitléar; and Aoibheann MacNamara of Ard Bia restaurant and The Tweed Project. De Waal will give the keynote talk on the Fonthill Vase, a Chinese porcelain piece dating from the 1300s and now residing at the National Museum of Ireland – Decorative Arts and History, Collins Barracks.There will be 32 talks and panel discussions. Tickets are €65. See http://miseeireconference.ie.

Joseph Walsh’s latest work, a table called Erosion, and a series of shelves titled Enignum, will be on display next week at PAD London, an upscale design show in Berkeley Square featuring antiques, art and furniture. Walsh’s creations, which he crafts at his studio near Kinsale, end up in private and museum collections across the world, at prices in the hundreds of thousands of euro. Walsh is represented by gallery owner Sarah Myserscough, who is at PAD for the first time. In the latest issue of Wallpaper* magazine, she describes the show as “small, with an intimate atmosphere, very chic and with an exceptional display of the highest quality design”. It runs from October 3rd-9th. See pad-fairs.com.

Talking of Wallpaper*, the October issue celebrates 20 years in business and is its biggest yet, at 506 pages. Sumptuous ads for handbags and watches crowd out the editorial, but there is some brilliant reading here, including a quick masterclass in what’s happening in the world of interiors and designs. There is a useful list of the biggest influencers out there: Miuccia Prada, Raf Simons and Tom Ford are included, but so is Airbnb, along with Nobu and Ai Wei Wei. And Wallpaper* itself, of course. Who said print is dead?

Hygge has taken firm hold of the high street, with retailers keen to get in on the Danish craze for getting cosy in winter. Storm lanterns, blankets, candles and hot-water bottles are easy-to-find hygge essentials, but M&S is bringing the concept a step farther with a Danish-inspired Christmas range that includes stag’s head candlesticks, wall art and a very grand cloche and serving platter that’s straight out of Downton Abbey.

Housewarming with a hamper

For anyone moving house, a nice cup of tea might be all they want. So consider a Nice Cup of Tea hamper from Hampers & Co as a housewarming gift. The Irish company was founded 25 years go by Tipperary native Emer Purcell, whose hampers are gorgeously presented in boxes, baskets and ribbons. You can order up anything from beef to biscuits. This year Purcell is collaborating with well-known food producers across the land, including James Whelan Butchers, Florrie Purcell from The Scullery and Breda Maher from Cooleeney Farm Cheeses, as well as Lough Derg Chocolates and Tipperary Crystal. The A Nice Cup of Tea gift box includes several different kinds of tea, both soothing and invigorating, a mug and a tube of biscuits. (Sadly,the teacups in the photograph are not included.) It costs €31.94 from hampersandco.com.