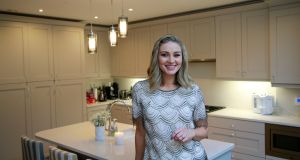 Practical first and a sprinkling of pretty later is the mantra TV3 presenter Anna Daly adapted when designing and decorating her family home in Delgany, Co Wicklow. “Having three boys under six makes you completely rethink your interior goals,” says Daly, who moved into a new-build house with husband Ben and sons James, Euan and Rhys just over two years ago.

When the couple first saw the plans for the houses being built by local Greystones firm, Wood Group, Ben was sold on all the eco credentials: think solar panels, heat pumps, water-harvesting systems, air-cleaning filters and all manner of tech to keep bills at a minimum.

Daly meanwhile, was won over by the area. “I’m from Terenure and a decade ago would have thought Delgany way too far out from family and friends, but as you grow older, your inner circle starts dispersing all over the world and you just have to go with what works for your family at a given stage. Right now, we need schools, parks, beaches, shops, restaurants, rugby clubs, football fields and access to the M50 and Delgany and Greystones ticked all the boxes,” she says.

Daly and clan didn’t move in as soon as they got the keys but rather waited a few months to get the house decorated and for the development to settle. “This is my number one tip for anyone buying a new build, otherwise you’re literally living with builders all around you on the site, with muck, dirt and machinery everywhere. If you can afford to stay on in your current house or bunk in with parents for a while, it’s definitely worth it and makes the moving process much easier on all the family,” says Daly.

The couple were delighted to have a new canvas to work from and having made a few design blunders in their previous house in Stepaside, knew exactly what pitfalls to avoid when approaching the house in Delgany. Their first priority was getting adequate storage sorted. “I think even if you lived in a castle, you’d run out of places for all the stuff you accumulate, especially with kids,” says Daly. So, when the carpenters from Nolan’s were in fitting the kitchens in the new development, Daly commissioned them to fit wall-to-wall shelving units in the sitting room and to box-in a TV console area, with shelving either side and cupboards on the bottom in the kitchen/dining area. Plus, they also had lots of big, thick plank-shelving erected in the shed too, which Daly says has been a lifesaver for all the DIY stuff and sports equipment.

“It really stretched our budget at the time getting that extra carpentry done but I knew if I didn’t do it then it would get put on the long finger. That’s something I’ve learned along the way – if experts are in situ in your house, ask them to do those extra jobs there and then, otherwise you’ll be forever saying, oh I must call in a plasterer/electrician. It works out cheaper in the long run.”

When it came to the interior scheme for her new house, Daly was able to draw on her day job for inspiration as she has been overseeing the property slot on Sunday AM, and presented the Dream Home show on TV3 last year, in which she gets to snoop around some of Ireland’s fanciest homes.

“Everyone loves seeing how the other half lives and I try to take some design lessons from these amazing houses too. Obviously, their budgets are way beyond mine, but there’s a common thread running through all these posh pads: most notably there is no clutter anywhere, some are like museums they are so tidy; second, they all have big kitchens with neutral cabinetry and massive marble-topped islands; colour palettes tend to be white, grey, stone, taupe and navy with lots of textures layered in similar tones, and pops of pattern appear via rugs, accessories, upholstery and curtains. Lastly, they all have amazingly lit and displayed art pieces – everything on view is considered and thought-provoking,” says Daly, who tried to draw on this formula when making design and decor decisions for her own home.

Daly also took a shine to how the showhome in the development in Delgany had been kitted out, so she approached the interior designer Eily Roe and sought details on a few specifics – “she was extremely forthright with all her suppliers, paint shades, fabric suppliers etc, and probably saved me days traipsing around shops looking at samples,” says Daly.

The couple began by painting the entire house in shades of a washable grey paint, “a no-brainer when you’ve kids”, she says, and from there layered up more stone tones, breaking them up with different textures and patterns and the occasional pop of dusty pink and gold thrown in to offset the masculine pallet.

“I’ve developed a thing for getting items reupholstered and had our cream linen couch redone in a durable dark grey fabric. I also bought the most basic stools for the kitchen island in Ikea but sourced chevron pattern covers on Benz. com (a site for custom covers for Ikea furniture). They have the best interior hacks on that site and the end result looks like you’ve bought bespoke pieces.

“My favourite piece in the house is an old armchair my father-in-law was getting rid of. It has this beautiful scalloped arm shape and deep bucket seat. Before he even finished asking did we want it, I had it strapped to the car roof and brought it to a local upholsterer in Ashford, who covered it in a blush pink velvet and added gold-stud trim. I follow this textile designer, Aoife Mullane, on Instagram, who screen-prints fabrics with metallic foil, so I asked her to make some cushions to complement the chair and she created blush and gold pieces which I adore. I then went totally mad and splurged on a pair of raw silk gold curtains to finish the look off. The combination makes for the most impractical corner in the entire house and I’ll probably need to put the fireguard around it to keep the kids’ paws off, but I had to add a touch of glam in somewhere,” says Daly.

While she would love to invest in lots of art, and have her own Dream Home-style gallery, there are too many things on the list right now that take priority. However, the couple were gifted a few nice pieces for their wedding in 2007, including a barcode mirror by Katie Fine, an abstract work by Lydia Brow and an ink sketch of Daly’s wedding dress by Rosemary Wiley, all of which take pride of place in the sitting room.

Meanwhile, it’s all systems go for Christmas, with the tree up, stockings hung and fairy lights stylishly draped in the garden outside. While Daly says she loves getting into the festive spirit with all the decorations and laps up the boys’ excitement over Santa, “I prefer nothing more than when January arrives and I get to take down all the bits and pack Christmas into the shed for another 11 months. The house just feels so much cleaner, calmer and less cluttered when all the stuff is gone. There’s something very cathartic about the new-year decor detox and it’s so much easier to stick than a food and beverage one.”