Everything you need to know about hygge: the Danish recipe for happiness

It’s turning your home into ‘nest’ – lock your phone away in a sustainably harvested wood box, invite your friends around and banish anything annoying or emotionally overwhelming 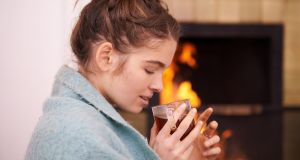 Anyone for a hygge: try a little cosiness

Autumn comes with a headbutt in Ireland; one day you’re all SPF, BBQ and waving a wine glass around outdoors, the next you’re sitting in outpatients telling the nurse you’re about to die of hypothermia and wondering why the world has become a dark, damp cave.

This year though there’s an alternative proposition. It’s exported from Denmark – the land of Lego, bacon and a monarch who smokes Marlboro. On the surface it’s all about scented candles, cashmere socks and chocolate-enriched pastries and it’s called hygge.

It’s not pronounced “hig”, it’s pronounced “hue-guh” and to accomplish the latter you’ll have to make a moue first. If you don’t know/care what a moue is, then maybe the concept of hygge isn’t for you. It’s one of those ideas that people say is “untranslatable” before spending 40 minutes trying to tell you what it exactly is.

Idiomatically translated as “cosiness”, a Danish person will tell you it’s the feeling you have when cosied up at home in front of a log-fire with soft, ambient candle lighting while only taking the wine glass away from your mouth long enough so you can have another pastry.

It’s turning your home into “nest”, placing your phone away in a sustainably harvested wood box, inviting your friends around (as long as they’re wearing cashmere socks and carrying scented candles) and banishing anything annoying or emotionally overwhelming.

If it all sounds like a crystal meth party, you’re mistaken. This would be more like a fondue party sponsored by Jo Malone candles with Enya-style colonic irrigation clinic music in the background. But there’s a lot more to it than the parodied stereotype.

Although hygge is a specifically Danish construct – and they give good Hygge on account of their winters lasting eight months and spending a lot of time indoors – other countries have an analogous version of hygge. The Germans call it “gemütlich” and the Dutch “gezelligheid”. For the English it would be a nice cup of tea followed by a good queue; here it would be lying on the floor watching Netflix while getting cracked into the gin.

Why hygge has suddenly become a talking point is that there are no less than nine books on the subject being published this month (September). The Book of Hygge, How to Hygge, The Little Book of Hygge and the Art of Hygge among them. It’s the new Black. And it’s a lifestyle choice that comes complete with a snug, woollen, interior lining and toasted marshmallows within arm reach.

Journalist Helen Russell, who went to live in Denmark a few years ago, has written the splendidly titled “The Year of Living Danishly: Uncovering the Secrets of the World’s Happiest Country” book. Explaining hygge to the BBC, she says: “the rest of the world seems to be slowly waking up to what Danes have been wise to for generations – that having a relaxed, cosy time with friends and family, often with coffee, cake or beer, can be good for the soul. Hygge seems to me to be about kind to yourself – indulging, having a nice time, not punishing or denying yourself anything”.

All of this runs appealingly contrary to the glum orthodoxy of today’s five-a-day, chia seed, low-ceiling alcohol unit prescriptions. We are being terrorised into a permanently neurotic state about what to eat and drink: our faces are buried into our phones to the detriment of real human engagement and we are low on joy.

Hygge need not come with a designer price-tag. Before the publishing world and scented candle companies got their claws into it, the concept was as much about as the rejection of expensive brands and conspicuous consumption with a move back towards meaningful, non-wi-fi enabled social relations.

It ties in with the curious Scandinavian construct of Janteloven (the Law of Jante) which puts the group above the individual, where no is any better than anyone else and there is an equality of participation.

The Law of Jante is frequently used by political scientists to explain how social-democratic policies are so deeply embedded in the Scandinavian psyche.

The individuation of a life being played out over social media is not “hyggelige”, but commonality is hygge. Whether it’s a convenient excuse to get drunk on a Monday night or just to eat half a factory’s worth of chocolate while talking about your love life really doesn’t matter – it’s taking pleasure in other people’s company.

But just why hygge is being taken seriously is the paradox behind the fact that the inhabitants of the cold, dark Scandinavian countries are regularly adjudged to be the happiest people in the world. And taking time out for hygge is considered a major contributory factor here.

Granted, in the Danes’ case, they have good bacon, great beer and one of the highest consumption rates of antidepressants in the EU. Who wouldn’t be happy on that diet? But they also do a good woollen jumper and produce great TV drama.

Hygge may all sound a bit Mary Poppins and even if all it boils down to is eating some burnt marshmallows with your friends, it’s probably better for you than Netflix and gin.