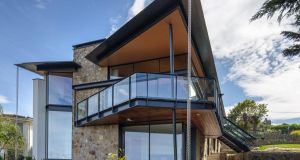 You enter this Dalkey house over a bridge – designed to add to the building’s drama, says its architect Richard Murphy. That dynamism begins before you even reach the suspended walkway and continues inside the house.

Planning permission stipulated that the sea view from the road above the house be kept, so as you enter the gate you get a roof-down vision of the whole building, defying its hunkered position by dancing lightly above its granite bed. A slender zinc roof floats above a glassy top level – overhanging roofs being a Murphy feature – and tapers to a triangle that points towards Dublin Bay.

The site was bought during the recession – in 2010 – when the couple who own it were working in Asia. Trips to Dublin to seek properties unearthed home after home that wasn’t quite right. “By chance I was looking at another house in the street that needed a full makeover and saw the for-sale sign sticking out of the undergrowth,” says one of them.

He turned to his friend Richard Murphy who had worked on two houses for him in Murphy’s home city of Edinburgh. Murphy’s own house, which won RIBA House of the Year in 2016, has an interior that corkscrews upwards gathering in rooms and nooks as it climbs, fitting them all into a tight site. Despite his genius at slotting structures into restricted nooks, in Dublin Murphy was working with a huge (about 350sq m/3,767sq ft) house with land beside. But once again restrictions led to clever design decisions. The unpromising site was north-facing, sloped seaward and had granite-strewn ground. That hadn’t stopped the previous owner seeking permission for an apartment block and eventually securing the go-ahead for two semi-detached houses.

“It is absolutely due north and we had to work out how to get the sun in,” says Murphy. Which he did: even on a rainy evening you can appreciate the sea of natural light as you enter the northeast-aspected building. A rooflight runs down the centre of the house pulling your eyes to the sea and the Howth peninsular beyond. The owner is a yachtsman and the house itself feels like a large craft – in more than one sense of the word – with its beech ceilings and built-in furniture (chosen for its homogenous grain) and floor in maple (it matches the beech but is more durable) and tiles, to relate to the granite on site.

Only when the build began did the gritty granite issues fully reveal themselves. “We didn’t know what we would find until we started digging,” says Murphy. Beautifully and sustainably, much of the granite was used and clads the lower part of the house as well as the in situ rock providing ground-source heat.

Murphy, who has designed four award-winning schemes in Ireland, presented a couple of designs to the clients, one of whom initially wanted a house running along the road but they realised that, if it were to have lots of glass, people could glare in at them from the street. So the home runs down the site’s eastern boundary (beside a neighbouring house) and looks north (to the sea), skywards and out west (to the terraced garden). It has a close links with the garden, visually and actually, via two external staircases.

The ground slopes at a greater rate than the roof – creating a trapezoid section – resulting in a single storey at the south, entrance, end and two storeys to the north where the livingroom, study and main bedroom have sensational views of the briny, with a special space reserved for the en suite bath which sits in a bay window affording views of the bay. No curtains. Only a determined person with binoculars in the distant conurbation would have a chance of checking out bathers, largely because it has been designed out of the vista.

“The view of the sea is best if you lose the middle ground and keep the foreground of the room and the sea beyond,” says Murphy. “You see a bit of the houses between but mostly you see the sea – because we lifted the house up so you don’t see the bottom of the garden. It is a much more interesting use of a view and gives it impact.”

The main bedroom and livingroom have doors that fold back, joining them to a terrace with a pond fed by rainwater sliding down chains from the gutter. The rooms can also be closed down by insulated shutters, as can the study and the openings at the top of all the rooms along the house from the entrance, beginning with a study, to a kitchen, familyroom, diningroom and living space. “I like to give clients the freedom to live how they like,” says Murphy.

A wide stair runs down past all the living spaces, beneath the rooflight. At the base you double back past bedrooms and to a playroom beneath the entrance which doubled in size when a huge boulder was found where a back wall was due to be. We can’t build on this, said the builders and the rock came out.

Much of the furniture is built-in: “You don’t have to buy much furniture when Richard designs your house,” says one owner. Other furniture came from Bo Concept and Rug Art: the couple and their two children will live in the house a while before deciding what more to add.

The owners laugh about how they were in Asia for most of the build: “A 13-hour flight away – so we just stood back and let it happen.”

They are happy with it, and some: “It is so visually striking. Every time I come in the gate I get excited,” says one owner. An emotion that continues along that entry bridge and beyond.