Competition for Airbnb as other home-sharing sites target niche audiences

The Irish site Homestay, OneFineStay and Mister B&B all chasing a share of the market 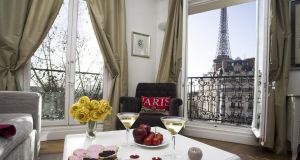 What Airbnb has popularised – the peer-to-peer rental of apartments, homes and spare bedrooms – the market has embellished with a roster of new and growing services that offer home sharing.

In a sign of a maturing market, these alternatives to Airbnb often carve potential users into niches, targeting, for example, interior design fans or gay travellers. They also reduce the volume of results users generally have to wade through to find the perfect home rental.

“There’s such a proliferation of listings out there that finding the signal through the noise is increasingly difficult unless you have a lot of time on your hands,” said Evan Frank, the chief executive of OneFineStay, a home rental brand that originated in London.

The following shared-lodging services fall into a few categories but all offer alternatives to hotels, and often to Airbnb.

A few operations began in reaction to what their founders say was bias on the part of hosts from other rental services.

After Matthieu Jost and his boyfriend met a host in Barcelona who appeared hostile to homosexuals, he founded Mister B&B in 2013. The service appeals to gay travellers with shared home listings in more than 130 countries, and holds “meetups” in various cities to connect like-minded travellers.

This month, Noirbnb, which targets travellers of colour, plans to get started. Its impetus, according to the founders Ronnia Cherry and Stefan Grant, who are black, was based on an Airbnb stay in Atlanta when neighbours to their rented house thought they were robbers and called the police. The company will not say how many units it has enlisted but noted that properties range from studios in New York to entire homes in Okinawa, Japan.

Some services replace the peer-to-peer interaction with hotel-like management in a segment called the “hometel.”

Established in London in 2010, the city-focused OneFineStay occupies the luxury end of the shared-accommodations market and makes rentals more hotel-like by replacing each homeowner’s linens and towels with deluxe versions and supplying high-end soaps and shampoos. A staff member greets guests checking in and acts as a concierge, removing any encounter between owner and renter. The company chooses its properties based on a 50-point evaluation meant to instil confidence in those perusing its site that the homes are uniformly clean, well-situated and visually interesting (rates start around €230 a night and most properties have a minimum stay of four or more days).

“If you go and look for a summer home in Martha’s Vineyard, you might find things are of completely equivalent quality, priced vastly differently from one another because no intermediary is saying, ‘This is what we believe the value is in the market.’ We’re vouching for the value,” said Frank, of OneFineStay.

Last year, AccorHotels acquired OneFineStay and the service has been expanding since. It is newly in Miami and Rome and just introduced a division that offers accommodations in vacation areas including the Hamptons, and Orange County and Palm Springs, California.

AccorHotels also acquired a stake in Oasis, a home-sharing service in 23 cities worldwide, last year. Founded in Buenos Aires in 2009, it has a strong presence in South America, and like OneFineStay it selects its homes based on a 50-point inspection that includes, among other things, whether wooden hangers are available in the wardrobes and that there are enough table settings for twice the maximum number of occupants. Oasis also replaces homeowners’ linens with its own, provides toiletries and has staff in each city to check travellers in and offer concierge services.

Oasis properties are also vetted based on design. They are strewn throughout desirable neighbourhoods in any given destination and include access to local gyms and members clubs. “We’re trying to create a more 360-degree in-depth experience, not just a place to sleep,” said Parker Stanberry, founder and chief executive of Oasis.

The company, which aims to expand to at least 60 cities in the next few years, is introducing one in San Francisco (from €130 a night) this month and added Chicago (from €120) and Rome (from €70) late last year.

Many holiday rental groups focus on a specific region. Perfect Experiences, for example, offers a portfolio of apartment rentals in Paris, London, Provence, France, and Italy along with concierge services to design day trips and tours.

With such regional fragmentation, the meta search engine Tripping. com comes in handy. It won’t reduce the number of search results you see, but it will centralise them.

“We find most travellers visit five sites before they book,” said Jeff Manheimer, a founder and the chief operating officer for Tripping.com. “A transaction that was offline is increasingly coming online,” he said.

Airbnb didn’t invent home sharing, of course, it just commercialised it. On the noncommercial end, Servas International, the nonprofit group that promotes free hosted home sharing, traces its roots to the peace movement that sprang up after the second World War. A newer arrival, Homestay was founded in 2013 in Dublin and offers a network of accommodations in more than 150 countries where hosts offer affordable lodging, breakfast and local intelligence. Its shared stays average €30 a night in Europe and €35 in the United States.

The house-swapping service GuesttoGuest, which is popular in Europe, recently acquired another house-swapping company HomeExchange. They collectively offer more than 350,000 homes and will continue to operate under separate names.

HomeExchange just started its Passport Programme offering the option to stay at another member’s home without reciprocally hosting them by earning points through hosting other members of the network. Members pay an annual fee starting at €160.

GuesttoGuest also allows nonreciprocal hosting based on a points system and does not charge a membership fee.

What will happen to all those new hotels Dublin was to get?
8

Expert tips: A physiotherapist on those staying at home
Real news has value SUBSCRIBE