Brew your cappuccino in a built-in machine, before drinking it in a free-standing soaker tub, set under a showcase chandelier 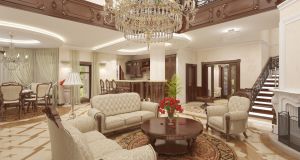 What do a showcase chandelier, a built-in cappuccino machine and a free-standing soaker tub (with padded head rests, obviously) have in common? They are all essential ways to make your home luxurious in 2017, according to experts in the field.

The showcase chandelier – think of it as “statement decor jewellery” – would come in handy as a conversation topic during a lull in the dinner party; the built-in cappuccino machine signifies you’re not a café arriviste and the free-standing soaker tub is so on fleek it’s unreal.

Further luxury bonus points can be accrued by adding a “gorgeous chair” accented with gold (and remember, colour-wise, 2017 is already all-about emerald green), a warming drawer wouldn’t go amiss and you should already have a herb cultivator.

But, as Bryan Ferry once so memorably sang, “In every dream home, a heartache”, and the heartache this year is the protean nature of luxury. What is now being breathlessly described as luxury, most probably isn’t. The word has been stripped of its historical meaning and being given a new, semantic upholstering.

Once, it was all so simple and straightforward: luxury denoted something enjoyed only by certain people, not all. It had a privileged and exclusive status.

Traditionally, luxury was defined by characteristics such as price (expensive), quality (top of the range), rarity (never mass market) and an ineffable sense of extraordinariness – something that mentally stopped you in your tracks.

These days you can find the term used incontinently as an adjective: luxury sausages from Tesco, luxury chocolates from Aldi, a luxury hotel break (in which you get a flat glass of sparkling wine from bored looking staff on your arrival), luxury nail clippers, luxury ironing boards. And if everything is a luxury item, then nothing is a luxury item.

The term has been stretched so much that the only working definition of it today is by its packaging, presentation and perception. Even the drawbridge of expensive price tag doesn’t work any more. People shop around for bargain eBay luxury items.

Luxury, as our parents’ generation would have defined it, doesn’t exist anymore. The term has become a four-letter word to the younger generation, who would only deign to use it as an object of ironic scorn.

As author Dana Thomas put it in her bestseller, Deluxe: How Luxury Lost its Lustre: “Once luxury was available only to the rarefied and aristocratic world of old money and royalty. It offered a history of tradition, superior quality, and a pampered buying experience. Today, however, luxury is simply a product packaged and sold by multibillion-dollar global corporations focused on growth, visibility, brand awareness, advertising, and, above all, profits.”

Lucia Van Der Post, founding editor of the Financial Times’ vertiginous How To Spend It magazine, believes luxury to be an anachronism. She believes that this coming generation want “to be emotionally touched by their experiences along with maintaining strong ideals of sustainability and ethics”.

You can very much appreciate Van Der Post’s point if you consider the journey the fur coat has been on over the past 50 years – once an item to be gloriously flaunted, now an item that may provoke personal abuse and threats of physical violence.

Where once, people would boast about their Dior or Lanvin purchase, now the boast is about Zara or Habitat.

The term has evolved, particularly since the financial crash, to signify more easily attainable aspects of luxury – something more in sync with how life is lived now (Ryanair, Airbnb, and so on).

Last month, The New York Times newspaper held a conference with contributions from influential speakers in the worlds of retail, decor, travel, hospitality and technology. Key findings were that in 2017, luxury needs to have “soul”; being “corporate and creative” were not enough, you also had to be “connected”.

This pairs up with all the recent research. Luxury consumption has always been as much about how people view themselves as how they want to be viewed by others – that hasn’t changed.

But the figures now show that, by some margin, Millennials would rather spend money on a desirable experience or event, rather than buying a desirable object. Glastonbury v. Gucci, if you like.

Modern style simply doesn’t acknowledge exorbitance and exclusivity. It is more about uniqueness and meaning. Luxury is more eccentric and idiosyncratic than it has ever been. Hence why what used to be called luxury is now just breezily called artisanal.

Patrick Kavanagh wrote beautifully about how “We have tested and tasted too much, through a chink too wide there comes in no wonder”, before calling for a return to the simpler ways “of pleasure, knowledge and the conscious hour”.