Attic doors and fireplaces are your enemies, rugs and chimney balloons your friends 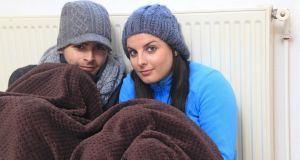 Roll on spring. All this cold week, all winter long, I’ve avoided the kitchen. Though it has a perfectly fine radiator, the kitchen is way colder than other rooms in the house. There’s a draught. Actually, more than one. There are gusts of wind coming from under the cabinets on an external wall, from behind the kicker boards. Put your hands down near the floor and you can feel the breeze. The 19th century floorboards, with all their gaps and air circulation beneath, have a hardboard layer below the floor covering, which stops the draughts – but this doesn’t extend under the cabinets, and it seems like a hurricane going on in there.

Now, with the end of winter hopefully in sight, I vow to start some sleuthing and nail the dratted draughts before I forget the misery of a breeze on the ankles while the heating is on full. I’m on the hunt for solutions before the onset of next winter.

Anyone building or buying a new house or doing a big refurb can expect a perfectly sealed and efficient home. But that doesn’t help the majority of us who live in a house built before – sometimes over a century before – current regulations, and who aren’t prepared to virtually demolish the walls to insulate them, replace all the windows and redecorate the lot after the mess.

Quick fixes to improve efficiency and track down draughts

1. The typical way draughts get inside is around windows and doors, through letterboxes or cracks or gaps in the floor or in the walls.

Over time and with shrinkage, these gaps around doors and windows, where the window meets the plaster reveal, let wind blow through into your house, points out chartered building surveyor Noel Larkin, an expert in defect analysis. A good examination outside and some mastic to seal the cracks goes a long way towards dealing with them, he says.

3. Take a look at the outlet for your kitchen extractor fan. The outside vents for most, in Larkin’s experience, are a basic grille and don’t have flaps to prevent wind coming inside. It should be straightforward to fit a replacement vent that has flaps to keep wind out. (It seems barmy that anyone would make, sell or fit an external extractor vent that doesn’t have flaps, but apparently they’re not standard.)

4. The hatch for access to the attic in many houses isn’t sealed well and the air that needs to circulate in it to prevent condensation can escape from around the edges into your heated room. You could replace your old attic hatch with a draught-proof insulated attic door. An alternative, Larkin suggests, is nail-on rubber insulation strips (better quality than the sticky stuff), which comes perforated with little holes.

7. Where there’s no skirting on the walls behind kitchen cabinets, draughts can come in between the floor and skirting. This is likely the source of my draught, but there’s no access to the wall at this stage, to fit skirting. Suggestions found on the hunt for solutions include insulating the space under the cabinets with loft insulation, and expanding foam in gaps around pipes.

8. Fireplaces are naturally draughty. For those that are not in use, a chimney balloon inserted in the chimney will cut out the cold air.

9. Shutters and heavy curtains, especially door curtains. Some research shows good U values (rate of heat transfer or heat loss) in old houses with curtains and shutters. (But as they’re not closed all the time this sounds like it’s effective at night-time only).

10. Fit a layer of breathable membrane behind vents (which should stop some of the breeze and may be a good alternative to closing or stuffing a vent). But if you have a boiler, stove or fire in the room, check with a heating expert that the breathable membrane is safe. Replace your fixed or permanent vent with a Black Hole vent, which has baffles, a sort of maze that regulates the airflow and prevent draughts.

11. Sheep wool insulation can absorb and release moisture without losing effectiveness, although it is considerably more expensive than standard insulation. Larkin says sheep wool is often the best insulation in an old or period house because it’s breathable and resistant to damage from dampness. It can be used in a new internally applied dry-lining system, if the building fabric is suitable, he says.

There was a bit of commotion in 2017 when a family in Co Derry said the home they built in 2012, heavily insulated with sheep wool, was greatly infested with moths five years later because of it; they described it as an infestation of “biblical proportions”.

From a reputable supplier, sheep wool should be washed and treated to repel moths. Proponents say it is more more efficient, environmentally friendly and healthy.

12. If you can’t identify the source of a draught yourself, you’ll need to call the experts in. A surveyor, engineer or energy auditor can do an air tightening test using a smoke gun to check where air is entering a house. The procedure uses specialist equipment and may cost €300-€400 or more.

If cold air is coming in, warm air is escaping. But the catch 22 is you need regular air exchange to avoid condensation and mould developing. So in any building you need a constant interplay and balance between draughtproofing and ventilation. If you eliminate draughts altogether (chance would be a fine thing), you can go too far; a building with excellent insulation and air tightness needs adequate ventilation.

Quite apart from the downside of totally airtight buildings, Larkin points out the damage caused by drying clothes indoors on radiators or clothes horses. In inspecting homes with condensation or mould problems, drying clothes is often the root. He gives the example of a heavy jumper that’s been washed and could hold a litre of water. As it dries, all that moisture has to go somewhere, and that will be to the coldest room in the house, which is where a problem will manifest.

So it’s a no-no, but we all do it (and will continue to do so in a rainy climate). If clothes are dried indoors, a greater air exchange is needed, warns Larkin, so opening windows to let the moisture out is essential.

Ventilation in bathrooms is also crucial, he points out; again, the moisture has to go somewhere. Fans in some homes are deactivated, or if linked to the lightswitch, the 15 minute run-on is reduced. Using a fan in a bathroom that is not otherwise ventilated is crucial to prevent mould.

The buzzy concept of demand-control ventilation aims at creating the right amount of fresh air, only when it’s needed or useful; the analogy is water - you turn the tap on when you need it, and so you ventilate when you need it (rather than have draughts raging through the joint all the time).

If you can eliminate ventilation when you don’t need it - probably half the time - you’ll save on heating.

Most vents in older houses are essentially holes in the wall, which let the wind run through your house. Demand control ventilation, which is activated by humidity or moisture in the air, is standard in new builds with intelligent airflow management, but most existing homes were built before the technology. If you’re not looking to install a whole ventilation system, a basic demand control vent could be a quick-fix.

There is a caveat says Simon Jones of Aereco, which specialises in building-wide ventilation systems. You should only do something that limits ventilation if there are no signs of mould or condensation already, as these indicate poor air quality - and thus you may need those draughts.

Replacing the usual hole in the wall vent with something like Aereco’s wall humidity sensitive air inlet (with the catchy name EHT), a wall mounted air inlet that controls humidity and limits airflow, means the vent will close when it senses the area is well ventilated. They cost roughly €50-75 direct from Aereco (you can’t generally pick them up in a DIY shop as they’re usually sold to trade).

Alternatively you could get just the airflow controller (for about €15-16), an accessory for that EHT vent, which is basically a gromit you push into that 4 inch (10.16cm) circular vent hole, to limit draughts. A phonecall to Aereco will help clarify what you need.

Older and period homes can have particular problems. Wall insulation – exterior, interior or cavity – is often not possible because of architectural features, and single-glazed windows in themselves create a draught. Window replacement is generally frowned upon.

The Irish Georgian Society suggests upgrades that improve window energy performance:refurbish existing windows with gaps either by installing draught-proofing systems or tightening the moving parts; using existing shutters, thermal blinds and curtains; secondary glazing, from bespoke units to DIY polycarbonate; and insulating inside shutter boxes and behind window aprons. They advise that lower cost, low impact upgrades will often deliver the best short-term results without undermining the character of the building.

– insulationireland.net – this seems to be a portal for advertising but it has useful information pages with diagrams showing jobs (how to insulate, draughtproof a window or a timber floor).

Michael Harding: The woman at the checkout said my mask made me look constipated
5

Work from home in a picture perfect Wicklow country garden for €1.35m
7