American gardeners in Kerry: ‘When you make room for it, nature always finds you’ 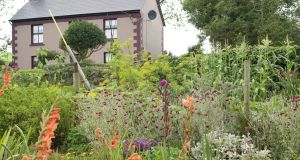 It was back in 1990 that American-born Marilyn and Ray Farrell, art gallery owners based in Maine, accepted an invitation from their artist friend, Neil Welliver, to stay in his holiday cottage – “the last house in western Europe” – on Slea Head, Co Kerry.

“I grew up in rural upstate New York, where winters are long and bitterly cold, springs last all of two weeks and summers are burning hot,” says Marilyn. “When we came to the Dingle peninsula, we both fell instantly in love with it. And when I discovered how extraordinarily long the growing season is in Ireland – especially here in southwest Kerry, where it’s possible to have plants in flower in December – I was intrigued.”

Six years later the Farrells became the proud owners of their very own Irish home, a neat two-up, two-down farmhouse in the sleepy rural townland of Glen Minard near Lispole, a place of secret holy wells and romantic castle ruins where the roadside verges are fringed with wildflowers and the sounds and smells of the Atlantic Ocean are never far away.

For the next few years they visited whenever they could, overseeing the renovation work required to make the house habitable. “We discovered that it was built in the 1940s with hand-made concrete blocks, using sand from the nearby beach. It’s amazing how resourceful people were back then.”

In 2003 they retired to Kerry permanently, selling their successful art gallery in Maine where they had once hosted a series of exhibitions by Andy Warhol, ” says Ray. “People often ask us how we hooked a famous artist like Warhol. The plain truth is that we invited him and he said yes. It was that simple.”

A keen gardener since childhood, Marilyn admits that initially her energies were directed towards making an ornamental garden, a not inconsiderable challenge in itself given the violent Atlantic storms that buffet this wet and windy corner of southwest Ireland. But as time moved on, she found herself gardening in a different way.

“All around me I saw examples of how badly nature was being treated … but also of how we can all make a difference. When Ray and I planted trees, the birds came. When we grew flowers, the bees and butterflies came. When we made our tiny garden pond, it soon filled with frogspawn. I learned that when you make room for it, nature always finds you.”

Their Kerry garden is a tale of three plots; a small, leafy atmospheric space surrounding their pretty farmhouse where cottage-garden style perennials such as aquilegia, bergenia and ferns flourish in the cool, damp shade, a colourful, sun-filled potager-style garden separated from the building by a narrow, winding boreen and a sloping, south-facing flower garden adjacent to it. “As time went on, we just kept adding more bits,” laughs Farrell, now in her 70s.

Their potager garden in particular is a glorious riot of flowers, herbs and vegetables where zingy-coloured gladioli, electric-orange marigolds and nasturtiums, scarlet and silver Lychnis coronaria and the magenta blooms of Geranium ‘Ann Folkard’ grow alongside pumpkins, sweetcorn, runner beans and courgettes while a passion flower blooms against a sunny stone wall.

Almost all were grown by Farrell from cuttings, seed or divisions, many gifted to her over the years by gardening friends. This area is also home to a tiny lean-to glasshouse cleverly repurposed by the couple, where she grows tomatoes, strawberries, amaryllis and other sun-loving plants. Just next to it is their mini-woodland populated with young specimens of ash, rowan, alder, oak, cherry, sycamore, hawthorn, blackthorn and Korean fir, many of them donated by a forester friend.

“Shortly after we bought the house, a neighbour arrived carrying a bunch of senecio [Brachyglottis greyi]. I thought she was giving them to me to put in a vase but she laughed and said, ‘No, no, they’re cuttings. Stick them in the ground and they’ll grow into a hedge. You’re going to need it.’ So I did as she said and I just couldn’t believe how quickly they established. I often tell my American friends that you could stick a broom handle into the ground in this part of the world and it would grow.”

Sheltered from the salty sea winds, this part of the garden is home to a wide mix of flowering shrubs and perennials – the butterfly bush (Buddleja), Verbena bonariensis, sedum, catmint, pinks, Japanese anemones – that Farrell prizes as much for the food and habitats they provide for visiting birds and pollinating insects as for their beauty. “Soon after we moved to Ireland I joined BirdWatch Ireland and Butterfly Conservation Ireland, both of which have taught me so much about gardening for wildlife.”

Teaching others about gardening for wildlife is something in which she herself takes great joy. “It’s a lovely thing to encourage, especially in young gardeners just starting out, even if it’s something as simple as giving seeds or plants from my garden. At this stage I think I’ve populated the entire peninsula with strawberry plants. ”

When lockdown was announced this spring many elderly Irish people felt marooned but not the Farrells, whose garden acted as a vital meeting place where friends and neighbours kept in touch. “We all kept the required 2m distance when we saw each other, often chatting across the hedgerows. It was a wonderful way to stay in contact. Many of our friends and neighbours continue to take daily strolls through our garden, often bringing their children and grandchildren with them so they can enjoy it together. Despite everything going on in the world recently, we’ve never once felt lonely or isolated. That’s been such a blessing.”

Trim established lavender and santolina plants to prevent them looking straggly, using a shears to gently cut away the faded flowers and the tips of the stems. Avoid cutting back into the older, woodier parts of the stems, which can set the plants back badly or even kill them. Late August/early September is also a good time to trim beech, Leylandii, thuja, box, yew and hornbeam hedges.

Watch out for self-sown seedlings of garden plants when you’re weeding/ hoeing and either pot them on or move them to a temporary “resting” bed until you can give them a more permanent spot. Always lift these baby plants very gently, making sure to keep their delicate root systems intact and watering them generously after transplanting to encourage them to re-establish as quickly as possible.

Róisín Ingle: Five ways to find joy in a pandemic. Only one of them is illegal
4