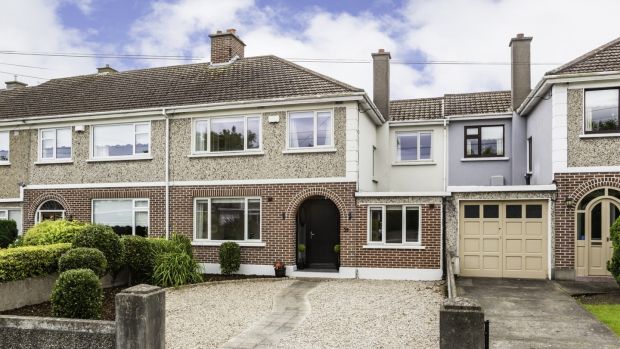 The main access to Maywood, a mature development of 1950s semis with garages in Raheny village, is from the Kilbarrack end of the Howth Road. Here the tree-lined entrance gives way to a mature green with rope swings on the trees where children can congregate – that is, when they’re not playing football on the asphalt-lined streets.

In 70 odd years since its construction many of the homes here have been remodelled and extended. Number 39 Maywood Crescent is one such property. Built in 1956, it was bought by its current owners in 2015 who paid €555,000 for it that October, according to the property price register.

They lived in it for about two years before deciding how best to remodel it, and had the works done in 2018. They had thought about extending to the rear but with the house already sizeable, thanks to an existing extension and garage they reconfigured the layout instead to better suit modern demands.

The property now has a broken plan layout with a living room to the left of the front door and an opening leading through to the dining room, illuminated by a long pendant overhead, and large windows and double doors leading out to the garden.

At the opposite end of this sizeable space – about 9m wide – is a smart, U-shaped kitchen with a counter creating a break between the two spaces. Designed by John Byrne of Kilbarrack Kitchens it has pale countertops over Prussian blue coloured units and is floored in a smart hexagon-shaped tile. (It took the owners an entire weekend to source these in batches from various branches of Woodies.)

Floor to ceiling cabinets – including a double-door unit – fill the pantry wall. The existing extension to the rear, where the kitchen had previously been, has been reimagined as a very roomy utility with plenty of drying room, all of which can be hidden from sight by closing the door.

In a busy family home where the washing machine is on constantly this is worth its weight in gold. There’s also a guest toilet and a second access point to the garden.

At almost 15sq m and 49ft long, the sunny south-facing garden was an unexpected boon. It’s an aspect that the owners are keen to retain as they trade up to, they hope, another project.

The couple converted the garage too, a space with a door that can shut out noise and offers a private space.

Upstairs there are four bedrooms, three doubles and a single. The next owner could look at converting the attic and extending out over the garage should they need more space at a later stage.