Veg out: May is the perfect time to sow carrots, peas, beans and more 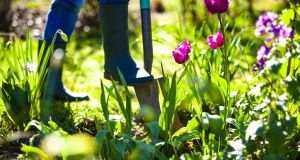 May is one of the busiest months of the Irish gardening year, a time to sow and plant many kinds of vegetables, herbs and ornamentals. Getty 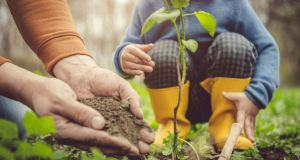 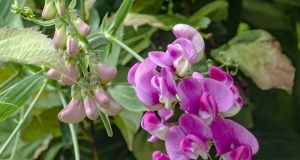 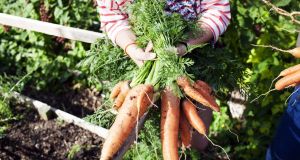 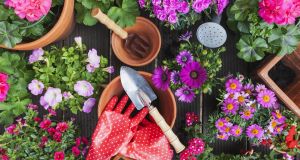 If you have a polytunnel, glasshouse, conservatory or sunny porch, then you can give your summer pots a fantastic headstart by planting them up under cover with a view to moving them outdoors towards the end of the month. Photograph: Getty 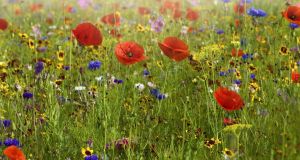 Many fast-growing, ornamental varieties of hardy and half-hardy annuals can be sown this month to give months of colourful flowers for just the price of a few packets of seed. Photograph: Getty 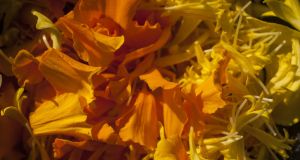 Marigold petals can be used to add bright pops of colour and flavour to a salad, cake or a summer punch. Photograph: Getty

May. It’s the month of lilac and hawthorn blossom, of columbines and violets in the woods, of freshly hatched seedlings and neat rows of spring-sown potatoes pushing their green shoots up through the soil.

It’s also one of the busiest months of the Irish gardening year, a time to sow and plant many kinds of vegetables, herbs and ornamentals with conditions now optimum for their quick germination and healthy growth. In short, it’s time to get those gardening skates on. Below are some useful tips to get you started.

The very welcome rainfall of recent weeks has created the perfect conditions for good germination of seed sown directly into the soil or containers outdoors.

Just make sure to take the time to properly prepare the ground in advance by removing all weeds and raking the soil to a fine, even tilth.

It’s also a very good idea to deliberately allow the first flush of weed seedlings to emerge (once they do, these can then be quickly hoed down) before sowing seed as a clever way to reduce weed pressure and make it easier to tend emerging crops.

As always, take very careful precautions against slugs, birds and mice (the latter will sometimes steal seeds to eat them or cache them elsewhere).

Carrot fly can also often be a problem with the adults emerging at this time of year to lay their eggs in the roots of young carrot and parsnip seedlings so it’s a very good idea to protect them by covering them with a layer of fleece or insect-proof material such as Bionet (available from fruithillfarm.com and quickcrop.ie, as well as good Irish garden centres offering an online service). This will also protect young brassica plants against common pests such as cabbage root fly and cabbage white butterfly.

If you sowed sweet pea seed last autumn or earlier this spring, then get the young plants in the ground as soon as possible as they like plenty of time to stretch their roots down deep.

Sweet pea also demands a position in full sun and a very fertile, moisture-retentive but free-draining soil, ideally enriched with a few handfuls of organic slow-release fertilizer and some well-rotted manure or homemade garden compost.

Make sure to thoroughly soak the root-balls in water and to generously water the planting hole before planting. Sweet pea will also grow quite happily in a large, deep pot or tub just as long as you keep the plants well-irrigated. As it’s a hardy annual, don’t worry about your young plants being damaged by a late frost; they’ll be just fine.

But do make sure to protect them against slugs and to offer some form of sturdy vertical support for them to clamber up. Finally, don’t despair if you didn’t get around to sowing seed as most good Irish garden centres stock trays of young sweet pea plants at this time of year.

Now is also the time to get many different kinds of young vegetable transplants in the ground. Again, take the time to prepare beds well by removing all weeds along with any stubborn perennial root systems and work in some well-rotted garden compost and some generous sprinkles of powdered seaweed.

Examples of vegetables that can be planted outdoors at this time of year include chard, perpetual spinach, cabbage, leeks, turnip, swede, calabrese, scallions, lettuce and rocket.

Before planting, it’s really important to “harden off” these young transplants by gradually acclimatising them to cooler temperatures; this is especially true of seedlings raised indoors on a sunny window-sill.

Start by placing them outdoors for a few hours each day, gradually extending the period over 7-10 days and eventually leaving them out over night. During this process, avoid placing the plants in a very sunny, warm or windy spot outdoors (too much of a shock to their still delicate systems)and instead put them somewhere sheltered and out of direct sunlight.

Many fast-growing, ornamental varieties of hardy and half-hardy annuals can be sown early this month to give months of colourful flowers for just the price of a few packets of seed.

Plenty are also very pollinator-friendly; examples include any of the single-flowering varieties of cosmos, honeywort (Cerinthe major), Californian poppy (Escscholzia californica)and, flowering tobacco (Nicotiana) as well as night-scented stock (Matthiola longipetala) which is great for visiting nocturnal pollinators including moths.

Other pollinator-friendly annuals suitable for sowing at this time of year also have edible blooms that can be used to add bright pops of colour and flavour to a salad, cake or a summer punch; examples include pot marigolds (Calendula officinalis,), French marigolds (Tagetes patula) and trailing or climbing kinds of nasturtium.

Other than in mild, sheltered gardens, it’s still a little too early to plant tender bedding plants outdoors as just one late frost could damage or even kill them. But if you have a polytunnel, glasshouse, conservatory or sunny porch, then you can give your summer pots a fantastic headstart by planting them up under cover with a view to moving them outdoors towards the end of the month.

For best results, always use a fresh, good-quality compost and mix in a handful or two of slow-release organic granular fertilizer. For maximum impact, concentrate on super-productive, long-flowering varieties of cosmos, dahlias, salvia, diascia, nemesia, surfinia, and bedding fuchsias.

But don’t underestimate the important role that foliage plants play in any summer bedding display, not only as a foil to pops of bright floral colour but also in terms of the long-term seasonal interest that they provide.