Secrets of growing from seed: 10 tips to get your garden going

Crack open the seed packets – and keep timing, temperature and freshness in mind 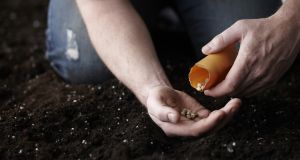 ‘Raising plants from seed has a lot to do with dodging some common pitfalls and following a few immutable rules of horticulture.’ File photograph: Getty Images

If I had a euro for every time I’ve been asked to share the secrets of raising plants from seed, I’d be . . . well, not exactly rich, but certainly possessed of a tidy little nest egg. Similarly, “I have no luck with seeds” is an expression that I hear a lot.

Yet the simple truth is that it’s got very little to do with luck and instead a whole lot more to do with dodging some common pitfalls and following a few immutable rules of horticulture.

So if you’ve spent the past few weeks staring with increasing frustration at your freshly-sown seed trays/pots for any tiny sign of life, then this column is for you. Because I know all too well that bitter sense of disappointment when nothing – nothing! – emerges, as well as the pure, delicious delight when it does. Here’s what I’ve learned . . .

At this time of year it’s too cold and wet to sow anything outdoors, so from February to the end of April I sow most seeds under cover, for pricking out into modular trays and then transplanting outdoors in late spring. The only exceptions are some vegetables (for example, radish, turnips, early peas, seed potatoes, garlic and onion sets) which I direct sow into well-prepared soil.

As a rule, the seed of most (but not all) species germinates best in gentle heat. In short, invest in an electric propagator. These come in all shapes and sizes, from the very affordable windowsill–sized kinds to the large, high-tech types. But once your seedlings emerge, always move them to a bright, slightly cooler spot to accustom them to more normal growing conditions.

Sometimes, however, it’s not that simple. Sometimes seeds of certain plants – examples include delphinium and bupleurum – require prolonged exposure to cold, then heat, to germinate, a process known as stratification. You can provide this artificially by storing the seed packet/freshly-sown seed in a fridge, or by leaving it outdoors over winter before moving it to a heated propagator in spring.

To germinate, seed must be viable, meaning it must be alive/respiring. But as seeds age, their viability dwindles, especially if poorly stored (the best place to keep them is in an airtight container placed in the vegetable tray of the fridge). For this reason, even the “sow by” date on the packet isn’t always an accurate guide. Confusingly, the seed of some species can remain viable for many years while others quickly deteriorate. There are also plants – for example primula, astrantia, hellebore – whose seed must be sown freshly harvested.

Without naming names, different seed suppliers vary greatly in terms of the freshness/quality of the seed supplied, so stick with the ones that give you good results.

As a rule, most seeds’ germination and growth depends on a growing medium that’s kept just slightly damp to the touch.

Infrequent watering and overwatering are both classic causes of poor germination and seedling damage or death. So is heavy-handed watering, which can also sluice tinier seeds off the surface of the compost so that they fail to germinate. So always sow using pre-dampened compost and place the pots/seed trays into a shallow tray filled with water when required to allow the compost to gently wick up moisture.

If you do have to water, do it gently, close to the surface of the compost, using an old teapot filled with tepid water.

Covering freshly-sown seed trays/pots with a clear plastic lid or sealing them in a transparent freezer bag increases humidity, creating a miniature biodome that greatly improves the rate of successful germination. But once you spot signs of germination, immediately start lowering humidity levels to avoid those freshly-hatched baby seedlings succumbing to disease. Begin by propping open the plastic lids and gently untying the plastic bags to allow a little fresh air to circulate, gradually increasing air levels before eventually removing the lids and bags.

As a general rule, seeds of most plant species require the darkness provided by a shallow covering of seed compost or vermiculite for successful germination. But some (usually the tiniest seeds) need exposure to light to trigger germination so should be surface-sown. Examples include the seed of foxgloves, nicotiana and antirrhinum. Once they germinate, all seedlings require high levels of natural light for strong healthy growth – a very good reason not to sow too early.

Sowing seed too deeply is a classic beginner’s mistake, as is sowing too densely, which results in spindly seedlings competing for space and light. So try to space seeds evenly, thinly and to the depth recommended on the packet.

A good quality, fine-grade seed compost makes a huge difference. Klasmann does an excellent peat-free option (available from fruithillfarm.com), or, if you can’t get your hands on that, try Westland’s Seed and Cutting Compost.

Seed of some species can take a long time to germinate – often weeks, sometimes months, or (sigh) even years. So don’t give up too quickly.

Once your seedlings develop their first true set of leaves, it’s time to prick them out by very gently holding them by their leaves and using a pencil to tease them very gently out of the compost, roots intact, before transplanting them immediately into a modular tray or small pot, followed by a – yes, I am going to say it again – very gentle watering.

All of which brings me to my last piece of advice, one often ignored: read the instructions on the back of the packet. Obvious or what . . .

Late February is a good time to sow the seeds of many hardy annuals under cover and with gentle heat, for moving to a glasshouse or polytunnel for the next few months and then transplanting out into the garden in late spring.

Another job for this time of year is checking any dahlia tubers that you’re overwintering in a cool shed or basement for signs of rot/decay. Any that you find showing obvious signs of bruising/softening/rotting should be added to the compost heap to prevent decay from gradually spreading to the rest of the fleshy tubers and rendering them unusable.