In the pink: why I’m weak at the knees for spring flowering trees 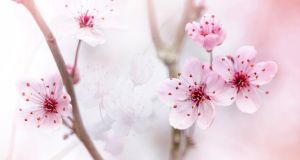 If you’re a keen gardener, then you’re already probably familiar with that strange emotion that some call plantlust.

Like a horticultural cupid’s arrow, it can strike without warning, any time, anywhere, but often in the most unsuitable of places, prompting some of us to do the oddest, most eccentric (and occasionally even illegal) of things including knocking on a stranger’s door to ask permission for a handful of cuttings, or illicitly smuggling plants home in our suitcases, or sneaking into abandoned gardens to rescue neglected specimens, or scaling high walls in pursuit of the rarest of bulbs.

As to the question of which species in particular provoke it, that all depends on the particular gardener. As a flower farmer, among my own weaknesses are other people’s spring-flowering trees, the sight of which inevitably makes me go a little weak at the knees. Plum blossom. Cherry blossom. Almond blossom. I love them all for their frothy, pared-back beauty and the painterly contrast of those fragrant, box-fresh flowers against the tree’s bare branches. Plus they’re an excellent and abundant source of spring nectar and pollen for pollinating insects emerging from winter hibernation.

And what a year it’s been for them so far. Last year’s hot summer followed by an extraordinarily mild and benign winter and early spring has resulted in an exceptionally early and splendiferous display with some species coming into bloom in February. Among them was the ornamental tree known as the black-leaved cherry plum (Prunus cerasifera ‘Nigra’), whose tiny, single, pale pink, pollinator-friendly flowers typically cover its bare branches from March-April. Growing to an average height and spread of 8-10m, this pretty, purple-leaved, deciduous, medium-sized, easy-to-grow tree does best in full sun and a moist but well-drained fertile soil but will cope with less than ideal conditions, making it a good choice for even exposed gardens. But just one gentle word of warning, which is that its dark and somewhat sombre foliage can feel oppressive when the tree is in full leaf so take care to situate it carefully.

Along with our native blackthorn, Prunus spinosa and the wild “gean” cherry, Prunus avium, the black-leaved cherry plum is just one of many members of the vast and diverse Prunus genus that are prized as highly ornamental, spring-flowering trees by Irish gardeners.  Others include the Japanese flowering cherry known as Prunus serrulata ‘Kanzan’, a hugely popular, very showy variety often seen growing in Irish gardens with clusters of candy floss-pink flowers that typically cover its bare branches in April/May. Hardy, adaptable, tolerant of most soils and highly decorative, the downside of this medium-sized tree (and one that it shares with many varieties of ornamental cherry) is that it must be planted a safe distance from buildings, walls or paths (in this case 10-15m) as its shallow root system can undermine man-made structures. Instead plant it along a grassy avenue or as a solitary specimen in a lawn.

Much smaller is the cherry known as Prunus incisa ‘Kojo-no-mai’, a tree so compact and slow-growing that it’s suitable for the smallest of gardens. Producing its pale pink/white flowers on bare twiggy branches in March-April, it can even be grown in a large tub or pot as long it’s kept regularly watered and given an annual top-dressing to replenish nutrients. Like many of the ornamental cherries, it also gives a second season of interest in autumn when its deciduous foliage turns to fiery shades before falling.

Similarly suitable for growing in a tub in a very small garden is the hardy Japanese apricot, Prunus mume ‘Beni-chidori’ (average height and spread of 2-3m), whose carmine-pink, fragrant flowers appear as early as February. Another relatively compact but upright variety is the very pretty, deep-pink flowered Prunus ‘Collingwood Ingram’. Named after the celebrated English ornithologist, plant collector and gardener Capt Collingwood “Cherry” Ingram who introduced many different varieties of ornamental Japanese cherries into cultivation over the course of his lifetime, it reaches an average height and spread of 4-7m by 3-4m. Or if you love the romance of a weeping tree, then consider the weeping Yoshino cherry (Prunus x yedoensis ‘Pendula’), whose cascading branches reach right down to the ground and are covered with large, pale pink/white, single, almond-scented flowers in early spring. Reaching a height and spread of just 4-7m, it’s yet another good choice for the smaller garden.

So is the lovely Shogetsu cherry (Prunus ‘Shogetsu’) which has a compact, gently spreading growth habit and whose large, pale double flowers typically appear on elegantly dangling stalks in April.

All of these graceful, spring-flowering ornamental varieties of prunus are very hardy, adaptable garden trees that do best in full sun and in a fertile, moisture-retentive but well-drained, slightly alkaline to neutral soil enriched with well-rotted manure or garden compost. To keep them healthy and happy and reduce the risk of diseases such as silver leaf or bacterial canker, pruning should ideally be carried out in summer. This means, of course, that come spring blossom time it’s a good idea to keep a watchful eye out for covetous, secateurs-bearing fellow gardeners stricken down with a bad case of plantlust. Not that I’m naming any names.

The scarlet stems and crumpled leaves of rhubarb plants are quickly pushing their way through the ground at this time of year. Before the plant’s large leaves properly open, make sure to give the ground around it a generous mulch of well-rotted manure and/or compost while making sure to keep the mulch away from direct contact with the crown. This will help to suppress weeds and to keep the soil around its root system cool and fertile. Ultra hardy and long-lived, rhubarb does best in full sun and a well-drained but moisture-retentive, rich soil.

If you’ve sowed seed of fruit and vegetables under cover in the last number of weeks, then you’ll now have lots of baby seedlings in need of careful care. It’s at this stage in their lifecycle that they are most vulnerable to extremes of temperature as well as to the damage caused by lack of sufficient light, over-watering and under-watering. So always make sure to water little but often (daily) and very, very gently using clean tepid water. It’s also really important to protect baby seedlings from cold draughts and frosty spring nights as well as from the sudden daytime rises in temperature that are a very common occurrence in glasshouses, polytunnels and sunny porches and windowsills at this time of year.

If you have space in your garden for a patch of comfrey, then this is a good time of the year to plant this ultra-useful, long-lived perennial whose leaves can be used to make a wonderful, natural liquid fertilizer rich in valuable plant nutrients, or as a mulch, or simply as an addition to the bottom of a potato trench. To prevent this fast-growing perennial from becoming invasive, seek out the sterile variety known as Symphytum uplandicum ‘Bocking 14’ that was introduced into cultivation by the famous organic gardener Lawrence Hills and choose an out-of-way spot in your garden or allotment where it won’t compete with other less vigorous plants. Comfrey enjoys a cool, moisture-retentive fertile soil in full sun or partial shade.