And sow it begins: Fionnuala Fallon’s picks her favourite seed packs for summer

Frilly flowers, tasty potatoes and onions worth waiting for can all be grown from seed 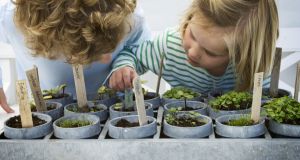 If you’re an inveterate seed junkie like me, then you’ll almost certainly have spent the last few weeks relishing the annual post-Christmas horticultural ritual that is seed ordering. Part of its special magic, of course, lies in the thrill of the hunt. That obsessive, lengthy trawl through the online catalogues of different suppliers in pursuit of hard to get cultivars. The sweet sting of joy on discovering new garden-worthy varieties as well as the rush of not-so-guilty pleasure on seeing those three magical words “Seed Order Confirmation” appearing in your inbox.

Every January I promise myself that reason will prevail and yet every year I order far more than I could ever hope to grow. The result is that my collection of seeds is now akin to Imelda Marcos’s stash of shoes, a hoard so ludicrously large that it has its very own wardrobe. What can I say except that nothing (except perhaps ordering dahlia tubers) gives me quite the same kick. So what’s on my must-have list for 2020? Here’s a little taster:

West Cork-based, family-owned Brown Envelope Seeds is the place to go for a wide range of open pollinated, organically produced, Irish-grown seed. Mother and daughter team Madeleine McKeever and Holly McKeever-Cairns are particularly known for their fantastic range of tomato varieties; this year’s addition to the catalogue is ‘Sunviva’, a blight-resistant, early fruiting, highly productive, yellow cherry-type, German-bred tomato that is “the world’s first tomato variety with an open source seed license”, meaning that anyone can use and share the seed. Sow February-March under cover and with bottom heat for growing on in a glasshouse/polytunnel/conservatory or in a sunny sheltered spot outdoors, brownenvelopeseeds.com.

Dried flowers are one of the biggest emerging gardening trends of recent years and few are hipper than Helichrysum bracteatum, also known as the everlasting flower or strawflower, whose daisy-like, papery blooms make a beautiful, long-lasting addition to autumn and winter arrangements. Chiltern Seeds supplies a wide range of mouthwateringly beautiful varieties including the very lovely ‘Salmon Rose’. Sow February-April under cover with bottom heat (22-24 degrees) for planting outdoors in early summer into a well-drained, not overly fertile soil in full sun, chilternseeds.co.uk.

Why, you might wonder, would you bother giving yourself the trouble of growing onions from seed rather than from oh-so-convenient onion sets? The answer is that not only will it open up a world of possibilities in terms of availability of different varieties but it also reduces the risk of introducing dreaded diseases such as onion white rot, the damaging fungal disease that can persist in the soil for up to 20 years and is often accidentally introduced into gardens and allotments via infected sets. This year I’m going to grow Real Seeds ‘Globe Onion’, a hugely productive, easy to grow, mild flavoured, versatile variety. Sow under cover (January-February) and with gentle bottom heat for transplanting outdoors in spring, realseeds.co.uk.

You could spend an entire gardening lifetime slowly working your way through the world’s very long list of sweet pea varieties without ever reaching the end. This year I’m growing ‘Albutt Blue’, a semi grandiflora type known not only for its intense perfume but also for the Edwardian prettiness of its white-edged-with-lavender picotee flowers. Sow under cover in late winter/early spring for transplanting out into the garden in late March/April. Sweet pea likes a rich, moisture-retentive soil in full sun and requires sturdy support to a height of 2m, rpsweetpeas.com.

Who doesn’t love the taste of homegrown potatoes? ‘Vitabella’ is an outstanding early/second-early new variety prized for its outstanding flavour and firm golden flesh as well as its productivity and great blight resistance, making it an excellent choice for organic gardeners who want to avoid the use of fungicides. Pre-sprout/chit the tubers indoors before planting outdoors in mid-spring into very fertile, moisture-retentive but free-draining soil in full sun, available as seed potatoes from fruithillfarm.com.

While a large number of new varieties of cosmos have been introduced in recent years, none are as exciting as Cosmos ‘Apricot Lemonade’, whose single, pale peach and pink flowers are a genuine breeding breakthrough in terms of colour.  Long-flowering and floriferous, this half-hardy, pollinator-friendly annual should be sown under cover and with heat (18-22 degrees) from March-May for transplanting out into the garden in early summer after all risk of frost has passed. Give it full sun and a moist but well-drained, fertile soil, thompson-morgan.com, expect stock to sell out quickly.

Last year’s cool, wet summer has me on the hunt for delicious vegetable varieties that will be reliably productive in less than ideal growing conditions. The climbing French bean known as ‘Mr Ferns’ sounds just the ticket; Irish Seed Savers catalogue describes it as a great doer even in poor summers, with “beautiful pink flowers and tender green beans that hold well”, irishseedsavers.ie.

This is a good time of the year to prune established currant bushes to encourage the plants to produce plenty of new fruit-bearing branches come springtime. For blackcurrant bushes, use a sharp, clean secateurs or loppers to remove any weak, spindly growth along with roughly a third of the plant’s shoots (the thickest, oldest branches). In the case of red and white currant bushed, remove any weak or spindly growth and then cut back or shorten individual branches by about a quarter. Established gooseberry bushes should also be pruned at this time of year, using a sharp secateurs or loppers to remove dead or damaged and low-growing branches, cutting back the tips of main branches by a quarter and then cutting all side shoots back to within one to three buds from the base.

Make use of this relatively quiet time in the gardening year to repair and sharpen garden tools. Replacing handles on spades, shovels, forks and pickaxes can be trickier than you think but your local Men’s Shed (menssheds.ie) will  do a great job for a small charge, while Dublin-based Mr Middleton (mrmiddleton.com) and Cork-based Fruithill Farm (fruithillfarm.ie) supply a range of tool sharpeners and grinding stones to help keep blades sharp.

British author and conservationist Isabella Tree, whose book Wilding: The Return of Nature to a British Farm (Picador Books) was one of the stand-out ecological publications of recent years, recently appeared on BBC’s Desert Island Discs – available on podcast – where she chose some of her favourite songs (she’s a Waterboys fan) and talked about the amazing 20-year rewilding project that she and her husband Charlie have undertaken at their 3,500 acre estate in Sussex. Fascinating stuff, bbc.co.uk.