With hints of celery, beetroot and carrot, darling, eat up your dahlias 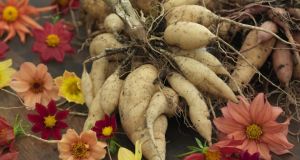 It’s at this time of year that responsible-minded gardening columnists typically advise their readers to dig up tender dahlia tubers – the fleshy, underground part of the plant, not unlike potatoes – to store somewhere frost-free over the coming cold winter months in preparation for replanting next spring. But here’s a thought. How about eating them instead?

I say this, I add, as someone who loves dahlias in the way that others love vintage cars, stamps, obscure comics, competitive cycling, Star Wars . . . You know what I mean. In other words, I do not eat my dahlia tubers lightly. In fact, I used not to eat my dahlia tubers at all. But then, this spring, a gardening friend gave me dahlia seed from some plants that she’d grown.

Not any old dahlias, mind, but dahlias raised, in their turn, from seed collected in the wilds of South America by the Devon-based nurseryman Mark Fillan. Intrigued to discover what kind of plants it produced, I sowed my dahlia seed into trays of compost generously warmed by a heated propagator, where it quickly germinated.

By late spring, I had close to a hundred young plants, which I transplanted into one of the garden’s sunniest beds. By early autumn, that same bed was utterly ablaze with dahlia blooms – some single, some double, some small, some large, in shades of orange, red, lemon, yellow, carmine and shell pink, on plants that ranged in height from 30-180cm.

Most of them, I loved for their elaborate, showy beauty. But the remainder? Suffice it to say that when it came to the chore of lifting their fleshy tubers, I debated whether they were worth the effort. Especially given the fact that my new dahlia plants, which are much closer to the wild species than most garden forms, were quick to form unusually large, fat, fleshy tubers that would take up a lot of space in storage.And then I remembered that dahlia tubers are edible. That, long before European gardeners started growing them for their extraordinarily beautiful flowers, the Aztecs cultivated these plants for their sweet, starchy, edible tubers.

Curious but wary, I gingerly peeled a few and tasted them. The tubers turned out to be surprisingly flavoursome with a mouth-pleasing texture, although surprisingly variable in taste. One was sweet and crunchy, with a flavour strongly reminiscent of celery or carrots, another like water chestnuts, while a third tasted of beetroot.

Others were reminiscent of sweet potatoes (which the tubers resemble in appearance) or Jerusalem artichokes – just like the latter, the dahlia is also rich in starchy inulin, with presumably the same unfortunate consequences for some people’s digestive systems.

But how best to cook them? In his book, Homegrown Revolution, the British botanist and author James Wong, who will be giving a talk in Dublin next Wednesday on behalf of the RHSI, suggests using the tubers to make dahlia ice cream, dahlia crisps, dahlia chips, dahlia soup or “mouth wateringly good” dahlia rostis or “latkes”. He also suggests using them grated in cakes, in much the same way that you might use carrots, parsnips or beetroot.

American food historian, organic gardener, author and epicure William Woys Weaver, who holds a PhD from UCD in ethnographic food studies, and has been trialling/breeding dahlia tubers for their flavour/edibility for many years, suggests using them chopped and shredded in a salad (lightly steam them first) or soups. The flavour and scent of dahlia tubers can vary hugely, he says, going on to explain that a few varieties/species taste bitter, but many others are sweet and flavoursome while there are even dahlias whose tubers taste of apples or quince.

Tuber colour, he explains, also affects flavour, “We have some pink and violet tubers and they have an entirely different taste.” Another factor affecting flavour is the length of time that the tubers are in storage, a trait that the tubers share in common with those of the potato. Woys Weaver’s long-term aim, through a process of careful selection, is to breed varieties of dahlia that are not only exceptionally flavoursome but which also produce large, smooth-skinned tubers that are easy to peel.

He isn’t the only one intrigued by the dahlia’s culinary possibilities; earlier this year the Swiss nursery Lubera released its own mini-collection of edible dahlias, DeliDahlias, following several years of research to discover the tastiest varieties.

Myself, so far I’ve only tried the thinly sliced, starchy tubers in a stir-fry, where they added both flavour and a satisfying crunch. I’m not dead yet. Better still, my culinary adventure has neatly solved the problem of what to do with my handful of unwanted dahlia plants. (Note: Never eat recently purchased dahlia tubers as these will very possibly have been treated with chemicals.)