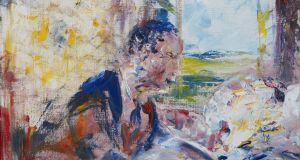 The Sick Bed by Jack B Yeats

Adam’s Important Irish Art sale – which was originally due to take place in March and postponed due to the coronavirus lockdown – is now open for viewings ahead of the sale at the auctioneer’s St Stephen’s Green rooms on Wednesday, September 2nd.

Considering the current climate of uncertainty regarding the coronavirus pandemic, there is a touch of irony that the top lot is The Sick Bed by Jack B Yeats.

The painting depicts a man in a blue suit, beside a patient, whose pallor tells the story of her weakness. “The surroundings serve as a haven of comfort, order and natural affection in contrast to the complexities of the world outside,” according to the catalogue entry by Dr Róisín Kennedy (Lot 53, €250,000-€350,000).

Some further lots appear to reflect the mood of the nation and what may lie ahead in the coming weeks and months, with themes of uncertainty and isolation, which is slightly uncanny considering these works were consigned to the sale last October.

Even the ghost-like spectre in Image of Samuel Beckett by Louis le Brocquy is a more sombre representation of Beckett than others from the artist’s head series.

Le Brocquy, who had a close friendship with Beckett, painted the watercolour three years after Beckett’s death – which makes this a very poignant work (Lot 82, €15,000-€20,000).

A second Yeats, Bound for the Islands, shows a sailor standing alone on a headland, waving to a boat at sea. The catalogue suggests the boat and its occupants are bound for the islands, “while the sailor, much like humanity, bids them well but remains behind”.

More isolation is represented in John Doherty’s Road Series Study – Flyover 2. The photorealist painting depicts a deserted flyover, give or take a handful of cars, which will remind viewers of what our roads resembled during the first phase of lockdown (Lot 109, €1,500-€2,000).

The distinctive The Gentle Art of Misconception by John Boyd, which depicts men in Victorian masks, is also underscored with a sense of bleakness and isolation. Boyd’s works, which have garnered a loyal following, hint at complex and unresolved narratives replete with a quiet, but profound, anguish (Lot 84, €4,000-€6,000).

But it is not all tales of gloom and doom in the catalogue of 150 lots that appears to capture the nation’s zeitgeist.

St Anne, patron saint of sailors and protector from storms, makes an appearance in St Anne and the Poppies by William Leech (Lot 37, €6,000-€10,000), reminding us all of the good news story of the year: the remarkable rescue of Ellen Glynn and Sara Feeney in Galway Bay earlier this month.

Further tales of conquest over strife are reflected in the marvellous Birth of David by Colin Middleton, a depiction of the biblical character who overcame Goliath (Lot 89, €20,000-€30,000), and The Big House by Basil Blackshaw.

The latter is a large painting (Lot 58, €12,000-€18,000) with a huge burst of sunshine yellow, which was painted after Blackshaw spent a long time in hospital, and after a fire at his studio had consumed everything “like flames that remove old growth in a forest, a place was cleared”.

This allowed Blackshaw’s talent to start afresh with a work that the catalogue describes as immortalising “a period in which Blackshaw’s artistic voice could be likened to a bellow”.

Real beauty and colour can be found in Ma Than E by Sir Gerald Festus Kelly, which depicts a Burmese girl in shocking pinks (Lot 54, €40,000-€60,000), while three Paul Henry works add a touch of Connemara and Kerry colour to the catalogue.

If you have bemoaned the lack of rugby in the past couple of months, Lot 77, a bronze by John Behan, Rugby Player – A Charge for the Line, is a well-timed entry at €3,000-€5,000. And if you have had enough of hearing headlines regarding the constant worry and woes of Covid-19, Lot 119 may strike a chord.

Barry Castle’s Odysseus and the Sirens tells the story of how the Greek legend stuffed his fellow sailors’ ears with beeswax to block the sirens’ call (€1,500-€2,000).

Current affairs programmes can be a bit like the sirens’ song: while irresistible to listen to, they may just drive you to distraction. See adams.ie

How to manage your children’s screen time
4

Róisín Ingle: I hated those wearable ‘fitness yokes’. Now I’m one of those people
9

Surviving ovarian cancer: ‘When I was 23, I started to heed the symptoms’
Real news has value SUBSCRIBE