Stately home with scope for change on Leeson Park for €2.45m 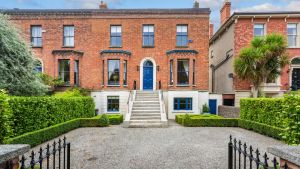 This article is 4 months old

The owners of a two-storey over garden level Ranelagh redbrick house embarked just a few years ago on a two-stage revamp of the house they bought in 1995. In phase one, they redecorated it in neutral shades, added smart new bathrooms and a smart kitchen/breakfastroom at garden level. But they resisted the modern trend to knock out the back wall and extend their Victorian home: the four first-floor rooms, two with deep bay windows, are the nicest in the house, says the owner, and the family use them frequently.

There is current planning permission for more changes, should new owners want to further revamp the listed building. But with most of their children grown, the current owners are selling their 273sq m (2,939sq ft) four-bed, with agent Hunters seeking €2.45 million.

Number 23 is one of a pair of double-fronted semi-detached houses built in 1861 on the south side of Leeson Park, close to the corner with Northbrook Road: most of its original period details – fireplaces, sash windows, plasterwork – are intact.

Number 23’s neighbour, 22, was at the centre of a preservation campaign in the 1970s, when many Georgian and Victorian homes in the area were being turned into offices. Permission to turn number 22 into offices was refused following a battle led by then alderman Carmencita Hederman from 1973 to 1977. Now houses on the road, where a number of embassies are located, command high prices: number 24 sold for €3.05 million in 2018 and number 18 went for €2.75 million in 2017.

The front door of number 23 opens into a hall floored with black and white porcelain checker tiles; like many of the rooms, it has rich cornicing and a centre rose. The drawing room on the right has a bay window, an unusually ornate black cast-iron fireplace and double doors opening into a smaller dining room. The living room on the left of the hall also has a black cast-iron fireplace, a deep bay window and a door opening into a study at the back of the house.

Downstairs, at garden level, the kitchen/breakfast room, floored with pale pine, runs from the front to the back of the house on one side of the downstairs hall. Timber units are painted a pale grey/green, an island unit is topped with pale granite, there’s a glossy green Aga and a window seat at the front. A wide arch leads to the breakfast room where wine racks are fitted into an exposed arched brick wall.

On the other side of the hall is a small family room, downstairs toilet, utility room and at the front of the house, a playroom with another window seat. There is access to the garden level from the front and storage space under the front stairs.

On the top floor there are four bedrooms, three doubles and a single, two en suite and a small toilet up a few stairs at the very top of the house. The large en suite-cum-dressing room with the main bedroom gleams with pale grey marble tiles on walls and floor and has a wall of mirrored Sliderobes.

A patio at the end of the downstairs hall at the rear steps down into a wide green lawn bordered by stone walls with a raised lawn area at the end next to a children’s play space; the rear of the house has been cleaned to expose the original granite wall. A tall mimosa tree blooms yellow every February, says the owner and the lawn is dotted with apples from a large apple tree.

There is valuable side access to number 23 and good room to park in the gravelled front garden behind electronic gates.