Paul Henry, Jack B Yeats and Walter Osborne retain their popularity at end of lacklustre year 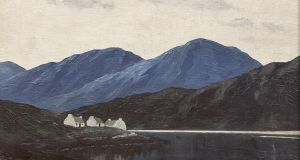 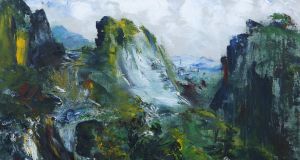 Sleep Beside (by) Falling Water by Jack B Yeats 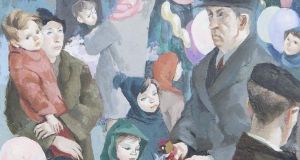 The Irish art market has had a lacklustre year but Adam’s has kept the “good stuff” until the end. Three artists: Paul Henry, Walter Frederick Osborne and Jack B Yeats – all traditional, blue-chip names – dominate the catalogue for their “Important Irish Art” auction in the St Stephen’s Green saleroom on Wednesday evening (December 3rd). Contemporary art may be the hot ticket in the international art market but Irish buyers retain traditional, conservative tastes and the “old reliables” are still the most sought-after – as they have been for decades.

The top lot is Sleep Beside (by) Falling Water, an oil-on-canvas dated 1948, by Jack B Yeats estimated at €120,000-€180,000. The painting once adorned the offices of the Capuchin Annual in Dublin and is on the market for the first time in 25 years.

Yeats was 77 and going blind – or dabbling in “abstract expressionism” – when he painted this scene. What does it show? According to the catalogue note: “An old man lies on the ground, his hands across his chest. On his right, a torrent of water cascades down a rocky ravine. On his left, a chasm and a dramatic mountainous landscape extends to the horizon.”

A painting by Yeats as a young man, dated 1909, is an example of his rather more accessible representational art. Gathering Seaweed, Mayo Coast (estimate €30,000-€50,000) depicts a man loading a cart with seaweed that was burned to produce kelp – widely used as fertiliser on land in the region.

Paul Henry’s west of Ireland landscapes are among the most popular of all subjects in Irish art and there are four examples in the auction led by Lot 60 – Early Morning in Donegal – which features the usual lake, mountain, sky – and last changed hands in, of all places, Tel Aviv, where it was sold by Sotheby’s in 1978. It now has an estimate of €70,000-€100,000.

Walter Frederick Osborne is represented by Portrait of Mrs Meade (€100,000-€150,000). She was the wife of a long-forgotten Victorian Lord Mayor of Dublin, Joseph Meade (who held the position in 1890/1891) and the painting is appearing at auction for the first time having remained in family ownership since it was completed 115 years ago. A second painting by Osborne is titled Ploughing (€40,000-€60,000) in which, according to the catalogue, the artist “skilfully represents the pastoral scene: the man with massive cart horses ploughing, seagulls rising behind them, and the boy and dog minding a flock of sheep in the background”.

Paintings by the Clonegal-based artist Mark O’Neill include The Egg Collectors (€4,000-€6,000), which will be familiar to guests at the Sandhouse Hotel in Donegal where it was formerly hung.

A crayon drawing of Brendan Behan – by Harry Kernoff, which, appropriately, hung in O’Brien’s pub in Upper Leeson Street for many years, is €3,000-€5,000.

Bridge at Clara by Tom Nisbet (€300-€400) shows a crossing over the River Brosna in autumn.