This Valentine’s Day show your love with these vintage tokens

Gifts with meaning, history and thought are an alternative to flowers and chocolates 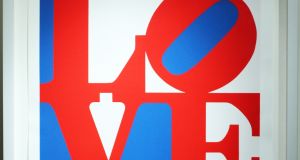 Love it or loathe it, the traditional day of romance – St Valentine’s Day, will see Ireland spend in excess of €200 million on romantic gestures.

The origins of the day go back to pre-Roman times. During the festival of Lupercalia, after slaying goats and dogs, naked men ran around in public whipping women – who lined up in the belief that the whipping would bring them health and fertility.

Then, during the third century Emperor Claudius forbade men to marry, wanting them to enlist in his armies instead, and Valentine, the priest who married couples in covert weddings was executed for his defiance on February 14th. He was later canonised and a relic of his blood rests in Whitefriar church on Aungier Street in Dublin.

While the notion of the valentine card dates back to 1415, for centuries lovers have also exchanged tokens and keepsakes to mark their affection.

An alternative to perishable flowers, cards and chocolates, are gifts with meaning, history and thought, available through some of Ireland’s antique shops.

One of the most widely recognised icons, and most plagiarised work of art of the 20th century, is that of Robert Indiana’s Love. Indiana, along with Andy Warhol, led the pop art movement, with Indiana’s Love series featuring on stamps and Christmas cards in the United States.

Gormley’s Fine Art on South Frederick Street have a complete set of The Book of Love – a series of 12 screen prints with accompanying poems – each piece is signed and dated. This though is the deluxe edition – one of 50 produced, and comes with a rare 13th print. The complete portfolio costs €114,000 and the single screen print in red and blue, from a limited edition of 200 costs €9,800.

The Silver Shop in Powerscourt Townhouse Centre has an array of heart shaped lockets in silver and gold to hold photographs of loved ones. Of interest is a Mizpah, (which translates as emotional bond) locket which traditionally was a token when a loved one was leaving for long periods, or in the case of war possibly forever. From €48–€995.

Other options are an Art Deco sterling silver compact mirror from 1937– while being practical, the space where the powder traditionally sat makes a perfect spot for a picture ( €115), or an antique photograph frame, which come in an array of styles to suit all budgets ( €145–€445). The shop has a selection of letter openers – which would make an alternative gift to the usual Hallmark card. From €98.

Traditionally a time for betrothals, it is also a time for gifts that say I love you. Matthew Weldon’s Powerscourt Shop has a rose gold ring with heart shaped garnets from 1871 for €1,450, and an Edwardian, Edward Schramm (a Faberge work master) brooch in pearls and diamonds (2 carats in total) said to have a provenance from the Danish royal family (€14,950), and curiously an old Fenian Claddagh man’s ring – being Fenian it has no crown (€1,950).

JW Weldon on Clarendon Street has a set of Dunhill cufflinks €1,450 and a fine selection of sapphire rings. A rare vintage Omega can be found at Paul Brereton at the watchhunter.ie – it features a movement system where only 3,000 were ever created across four models (€2,950).

Love hearts and engagement rings abound in John Farrington’s shop on Drury Street. His selection of heart-shaped and cupid pendants, includes a 10ct aquamarine and diamond piece €9,500. Aquamarine has become hugely popular since the newly christened Duchess of Sussex, Megan Markle, was spotted wearing the late Princess Diana’s ring on her wedding day.

Say it with words

For book lovers Ulysses Rare Books on Duke Street has a signed copy of The Love Poems by John Montague (€75), and Dánta Gráadha Irish Love Poems (1350-1750) by Augustus Young €20.

Also by De Burca is a rare Republican autograph book from 1918, with signatures from the Irish general election. Two of the entries feature the signatures of Kitty Kiernan’s love rivals – Michael Collins and Harry Boland, each of whom had proposed to her but both tragically died in 1922 on opposite sides of the Civil War (€2,750). John’s bookshop in Athlone has the posthumously published first edition of Giacomo Joyce, (€275) a free form love poem by James Joyce.

For sheer practicality, the Heart Dining Set by Danish designer Hans Wegner from 1958 in oak and teak, was never reproduced due to the high skills required in manufacture, and can be found at the Vintage Hub in Lusk €4,950.

Dept of Housing to extend planning permissions due to expire during Covid-19 crisis
Property market has not felt full impact of Covid-19, warns Sherry FitzGerald
What sold for €535k in D7, Rathfarnham, Dún Laoghaire and Kilmainham
Savills launches online shop for new-home buyers
What sold for €265k in Dublin city, Poppintree and Co Wicklow