Great Victorian revival on Windsor Road in Rathmines for €1.65m

The south-facing rear garden is landscaped around a meandering path 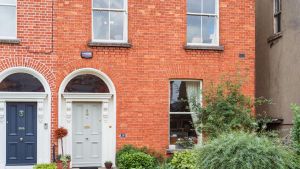 One of the small blessings when period suburban houses were routinely converted into flats was that many landlords created cheap makeshift partitions to divide the rooms. In doing so they did not alter the internal fabric of the house, so period details such as coving, architraves and ceiling roses survived.

One of the nicest features at 18 Windsor Road, a Victorian house on the southerly side of this quiet road in Rathmines, is the drawing room on the first floor. What would have been the piano nobile in Georgian and Victorian times, these rooms were the prime spot for entertaining, with higher ceilings and large windows away from the noise and pollution at road level.

When the current owners of Number 18 purchased the house in 1993 it was laid out as eight flats “with a Yale lock on every door, and a water geyser in every room”. The drawing room on the upper floor was divided into three rooms: “it looked quite ridiculous as the fireplace is so large, in contrast to the tiny room it sat in”, say the owners, who are downsizing.

The room is now reinstated as a large drawing room complete with period furnishings, and runs the entire width of the house.

An extension was added to the rear of the kitchen, which now houses a large dining space, and a small office is adjacent.

The kitchen feels brand new despite being completed five years ago by Simon Brown who “almost moved in for a year” as he was tasked with lots of other cabinetry around the property.

To the front of the house is a further drawing room overlooking the front garden with an open fire and book-lined walls – the owners are academics.

In its current layout the house has three bedrooms. The upstairs drawing room could make a superb principal (fourth) bedroom, but it would seem a shame to turn it into a bedroom as it is such a comfortable spot for relaxation.

The position of the house allows for a southerly aspect in the rear garden, which is landscaped with mature shrubs around a meandering pathway.

One of the benefits of the location of Windsor Road at the eastern end of the Dublin 6 suburb is the short walk to both Cowper and Beechwood Luas stops – each is a seven-minute walk. The road itself is quiet, and benefits from not being used as a rat run for rush hour traffic. There is also ample space for on-street parking through resident parking permits, something of a luxury in this part of town.

The property, which now extends to 186sq m (2,011sq ft), is in turnkey condition, and is on the market through Sherry FitzGerald seeking €1.65 million.