Talk about it: Art and architecture talks in Dublin and Cork

From Augustus Pugin to French postcards, a guide to lectures taking place this autumn 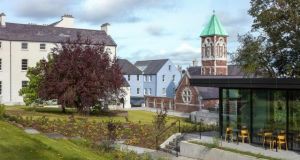 The legacy of Augustus Welby Northmore Pugin in Ireland; the history of the earliest piece of documented Chinese porcelain in Europe, the Fonthill Vase, and the perennially fresh furniture designs of Eileen Gray. These are some of the topics for the forthcoming lecture series organised by the Cork Decorative and Fine Arts Society (DFAS).

By way of a taster, the society will host a free public lecture at Cork City Library on Wednesday, September 12th, when the architectural historian Jessie Castle will give a talk entitled: “Hidden in Plain Sight: Nano Nagle’s 18th-Century Convent.”

Castle was closely involved with the redevelopment of Nano Nagle Place, which, with its community education project, migrants’ centre, interactive visitor experience and cafe, has created a space in the centre of Cork city where 21st-century communities can flourish.

“We’ve just run a workshop up there, where we took children aged 12 – with their parents and guardians, of course – and turned them into historical detectives,” Anthony Wade says. “We showed them the stained-glass windows in the Goldie Chapel, then gave them some historical material such as birth certificates and biographies, and asked them to come up with reasons why there might be a window to any particular person – perhaps they were a butter merchant in Cork, or a parish priest, or whatever. We all had a whale of a time.”

Wade set up Cork DFAS with his wife Pam in 2013, when they returned to Ireland after having lived and worked abroad for many years. “We thought we’d meet interesting people, and get to know people – and that’s exactly what happened,” he says.

“The central library, where we hold the free public lecture, is an associate member – as are pretty well all the cultural and artistic institutions in the Cork area. That gives us a backbone, or a sort of web, to which we’ve attached ourselves. We’ve also had terrific support from Cork City Council through the Cork City heritage grant scheme. This helps us carry out conservation projects – our members are currently recording the fixtures and fittings of St Anne’s Church in Shandon. ”

The autumn-winter lecture series begins on October 3rd, when Jane Choy from the Mauritshuis at The Hague gives a talk entitled “Rembrandt: Bohemian or Businessman, Romantic or Rebel?” That will be followed by Adrian Le Harivel, a curator at the National Gallery of Ireland, on Nathaniel Hone (November 7th) and blogger and art historian Elaine Hoysted on motherhood in early modern Ireland (December 5th).

Tony Harpur will take a look at Pugin’s legacy in Ireland on February 6th and Sarah Foster from CIT Crawford College of Art and Design will explore the hair-raising history of the 14th-century Fonthill Vase (March 6th). Mary Healy from University College Cork will examine French postcard culture and Algeria (April 3rd) and the series will conclude with a look at the work of the designer and architect Eileen Gray by Jennifer Goff, curator of the Eileen Gray collection at the National Museum of Ireland (May 1st).

All talks will be held at the Metropole Hotel on MacCurtain Street, Cork, at 7.45pm. Annual membership of Cork DFAS costs €80. There are also seasonal options, visitor’s passes for individual lectures and a student pay-as-you-go fee.  For more information see corkdfas.ie

In Dublin, the Irish Georgian Society’s new public lecture series, “Great Georgian Architects: How they shaped the classical city of Dublin”, will look at Georgian architects from William Robinson to Edward Lovett Pearce to Richard Castle, William Chambers, James Gandon and Francis Johnston. The lectures will be given by architects and architectural historians on Tuesday evenings at 6.30pm through September and October.

Dr Edward McParland, former professor in architectural history at Trinity College Dublin, will give a talk on the nature of Dublin Classicism in the 18th-century as part of the series. Dr McParland’s work, Public Architecture in Ireland 1680-1760 (Yale University Press, 2001) is the go-to book for the Georgian period.

According to McParland, the Georgian era in Dublin was a crucial period in the construction of a new and stable society. London was the centre of the cultural world and while some of the early Georgian architects were based in Ireland, it became fashionable to seek out British architects for new building projects. Dublin – where the surveyor general office was – then provided the model for provincial buildings.

Many of the new public buildings constructed in the Georgian era are our most celebrated buildings today. Parliament House (now the Bank of Ireland on College Green) was designed by Edward Lovett Pearce to house the House of Lords and the House of Commons. Trinity College Dublin’s Old Library was designed by architect Thomas Burgh for academic books. St Patrick’s hospital and the Rotunda Hospital were some of the first hospitals of their kind in the world. The Royal Barracks (now Collins Barracks) was for military purposes and Custom’s House and Newcomen Bank (now the Rates Office) served the burgeoning merchant class when Dublin was deemed to be the second city of the British Empire.

Then, as now, the style and stature of buildings symbolised the economic and political forces at play. In an Irish Georgian Society walking tour in advance of the lecture series, architecture historian Dr John Montague explained how the ornamental porticos of the Royal Exchange (now Dublin’s City Hall), faced north and west to express solidarity with the old medieval city centre around Christ Church, turning its back on the new Georgian squares to the east of the city. It was designed by architect Thomas Cooley.

Dr Montague, who now works in the College of Architecture, Art and Design at the American University of Sharjah in the United Arab Emirates, says that the Georgian architects set themselves against the Baroque architecture in Europe. “The Georgian period spans the reign of George I, George II, George III and George IV – the latter [of] which is also known as the Regency period,” he explains. Many of the Georgian architects studied the works of the 16th-century architect Palladio, who was in turn inspired by the classical architecture of ancient Greece and Rome.

Edward Lovett Pearce, who also designed Nos 9-12 on Henrietta Street, is arguably the Georgian architect held in highest esteem by architectural historians today. According to McParland, Richard Castle, whose buildings include Leinster House and the Rotunda Hospital, became the next Georgian architect of importance after Pearce’s premature death. The work of James Gandon – possibly the best known of all Georgian architects – emerged 30 years later. Gandon’s buildings in Dublin include Custom’s House, the Four Courts, and King’s Inns.