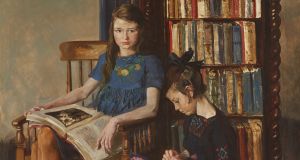 Lot 13: ‘Double Portait of Two Girls’ by Margaret Clarke (€20,000-€30,000) is among the artwork that was seen as too unorthodox in earlier decades, but now takes centre stage at Whyte’s auction

Bacon had written to le Brocquy, a lifelong friend, to express his flattery at being included in the artist’s portraits, but on seeing the probing work for the first time remained “resolutely silent”.

In addition is lot 49, Study for a Family (€50,000-€70,000), which is one of a series of the celebrated work Family which now hangs in the National Gallery. In 1952, le Brocquy offered Family as a gift to the Hugh Lane Gallery, but it was rejected on the grounds that it was considered not to be in keeping with the Catholic ethos of the country. In 2002, Lochlann Quinn and his wife Brenda paid €2.7 million for the painting and gave it to the National Gallery under Ireland’s heritage donation scheme.

Mainie Jellett, whose work Abstract Design, lot 29 (€9,000-€12,000), forms part of the auction, suffered a similar rejection by Irish society in 1923. A review in The Irish Times headlined an exhibition of her work as “Two Freak Paintings”, and further critics described her work as “sub-human” and that she had fallen victim to “artistic malaria”.

Le Brocquy and Jellett together with Evie Hone, Fr Jack Hanlon and Norah McGuinness established the Irish Exhibition of Living Art (IELA), which was set up to act as an alternative to the more conservative Royal Hibernian Academy (RHA) exhibitions. It showcased work by artists considered to be too unorthodox for the time, but the avant-garde artists of the last century are the traditionalists of today, and all of these artists, some spurned by Irish society, are now celebrated in Whyte’s sale.

Margaret Clarke was also heavily involved in IELA. For years, her reputation as an artist was overshadowed by two prominent men in her life; she was referred to as the wife of artist Harry Clarke and the student of William Orpen. The exhibition Margaret Clarke An Independent Spirit in 2017 at the National Gallery provided a springboard of renewed interest in her work, and her Self Portrait – signed under her maiden name Crilley, achieved €48,000 at Whyte’s auction in November 2018. The estimate for the painting was €20,000-€30,000 – the underbidder was a national institution. Her Double Portrait of Two Girls, from the collection of Ireland’s 1948 Grand Slam rugby captain Dr Karl Mullen – lot 13 – is listed with an estimate of €20,000-€30,000.

Interestingly, the IELA, established in 1943, had a high proportion of women founders and exhibitors and according to Ian Whyte: “For the past five to six years, there are a number of collectors buying works by Irish women artists, as they feel these excellent works have been neglected for years.” A gouache by Hone, lot 24, Cartoon for Stained Glass Window, is seeking €800-€1,200, and lot 52, Annie by McGuinness, is listed at €8,000-€12,000.