Go forth and propagate: Why you should grow your own plants in your garden 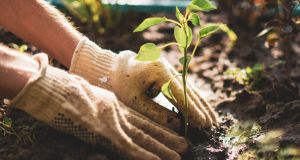 The repeated closure of garden centres throughout this year has served as a precious reminder of the importance of this method of renewal. Photograph: iStock

It’s fair to say that despite its many green-fingered connotations, the term “plant propagation” has never been considered the sexiest of horticultural expressions. Which is strange, because in fact few things are more quietly thrilling than the art of propagating your own plants, whether it’s from seed, division, layering, grafting or cuttings.

Take the latter as an example of how truly extraordinary the plant world is. Just imagine, for a moment, sawing off your finger or your toe (stay with me) and then using it to grow an entirely new infant “you” that’s genetically exact in every way. Because that’s pretty much what happens when you grow a plant from a cutting. Contained within its cells is not only the unique genetic fingerprint of its parent plant, but also those same cells’ near-miraculous ability, if given the right growing conditions, to produce new roots and thus new plants. How magical is that?

This if you think about it for a moment, also opens up a universe of wonderful possibilities for gardeners. That cherry tree that’s been growing in your old family garden since you were a child and that you’d now love to cultivate in your own as a keepsake? The beautiful but unidentifiable shrub growing in a friend’s garden that you’ve admired for years but never seen for sale in a garden centre despite repeated searches? That single, impressively productive fruit bush you’d dearly love to have more of? All these are eminently worthy candidates for propagating by cuttings.

How to do it? As with everything in gardening, so much depends on the time of year. But from late October until early spring is an excellent time to take what are known as hardwood cuttings (short sections of the young, woody stems of trees, shrubs and climbers, ideally deciduous species) as well as what are known as root cuttings (very short sections of the underground roots of woody and herbaceous plants).

To take hardwood cuttings, simply select young, straight growth from a healthy parent plant, using a sharp, clean secateurs or gardener’s knife to cut just below a leaf node/bud at the bottom of each cutting and just above a leaf node/bud at its top. Each cutting should be between 15 and 30cm long (the longer length in the case of trees and large shrubs) and about the thickness of a pencil. Cut off and discard the soft tip, making a slanted cut so that you can easily identify which way up the cutting should go (as topsy-turvy as our world is at the moment, no plant wants to grow upside down).

Then insert these cuttings vertically around the edges of a 2-litre pot filled with a free-draining multipurpose compost (a 50:50 ratio of compost to horticultural grit is ideal), making sure that the bottom two-thirds of each cutting is beneath the surface of the compost. Firm in, lightly water and finish off with a label, making sure to include the date along with the name or a brief description of the parent plant and the garden it came from.

This simple method of propagation is suitable for a wide variety of deciduous species including roses, philadelphus, buddleia, elder, cornus, forsythia, jasmine, vitis, honeysuckle, willow and many varieties of fruit, including currants, gooseberry and mulberry.

Although they’re a little trickier, you can also take hardwood cuttings of evergreen or coniferous trees or shrubs (examples include yew, pine, juniper, holly, mahonia, pittosporum). Just make sure to cover the pot with a clear plastic bag or lid to help maintain humidity and prevent water loss from their leaves.

Because plants are dormant at this time of year and temperatures and light levels are low, hardwood cuttings typically take several months to establish, sometimes longer. But you can speed up the process and increase the strike-rate by placing them in a glasshouse, polytunnel or cold frame and, if possible, offering them some sort of bottom heat (for example, from an electric propagator or heated soil cable).

Alternatively, if you can give them a free-draining, weed-free, fertile soil in a bright, sheltered spot in the garden or allotment, then your hardwood cuttings can be grown on outdoors. Simply dig a shallow trench, line the base with horticultural grit and insert them into the ground as described above, spacing them roughly 10-15cm apart and firming them in well before lightly watering and labelling them .

At this time of year, as plants enter winter dormancy by storing precious reserves of energy in their underground root systems in preparation for the cold, dark months ahead, root cuttings are another excellent way to propagate a wide variety of shrubby and perennial species.

Examples of species suitable for this particular method include acanthus, verbascum, eryngium, echinops, phlox, Japanese anemones, the foxglove tree (Paulownia tomentosa), the Californian poppy tree (Romneya coulteri) and the sumach tree (Rhus typina). Intriguingly, however, it’s not recommended for plants with variegated foliage, which typically don’t come true to type from root cuttings but instead revert to green.

Ideally select long roots, again about the thickness of a pencil (this won’t be possible in the case of more fine-rooted species), making sure to leave a good proportion of the root system of the parent plant intact. Wash and then cut these long roots up into 5cm long sections, using a slanted cut to easily identify the top of each individual cutting.

With thicker, fleshier-rooted species, insert the cuttings vertically into a 2-litre pot filled with a 50:50 mix of multipurpose compost and horticultural grit as described above, burying them so that their tops are just below the surface and spacing them about 10cm apart.

With thinner rooted species, simply spread the root cuttings out evenly on the surface of the compost and then cover them with a further shallow (2cm) layer of compost. Water lightly and label. Just as for hardwood cuttings, root cuttings will do best if you can give them a sheltered spot in a glasshouse, polytunnel or cold frame and, if possible, bottom heat.

Whether you use hardwood cuttings or root cuttings, patience is of the essence when it comes to these two methods of plant propagation. So don’t attempt to pot them on or plant them out until you spot very clear signs of root establishment – healthy new growth and baby roots pushing their way through the base of the pot – next spring or early summer.

I’ve sometimes been asked why gardeners would go to the faff and bother of propagating plants in this way, when they can so easily be bought. The answer is that not only is it enjoyable, hugely rewarding, much more environmentally friendly and far kinder on the pocket, but it’s also a much more resilient and self-reliant way of gardening. As deeply frustrating as it’s been for Irish gardeners, the repeated closure of garden centres throughout this year as a result of the pandemic has surely served as a precious reminder of the importance of this method of renewal.

This Week in the Garden:

Mild autumn and winter temperatures have greatly extended the season of grass growth in recent years so as long as the ground is firm underfoot and not waterlogged or frozen, lawns can continue to be mowed every two to three weeks to keep them in shape. But choose a dry day and raise the blades a couple of notches before doing so.

Earth-up or stake tall brassica crops such as sprouting broccoli and Brussels sprouts to prevent their root-balls from being rocked loose by winter gales and storms. If you haven’t already done so, it’s also worth netting these crops to protect them from being eaten by hungry pigeons.