Upgraded haven amid the D4 hustle and bustle for €1.45m 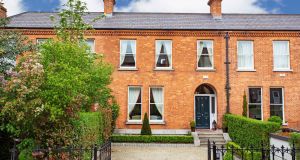 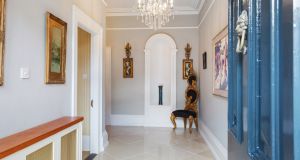 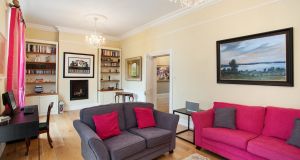 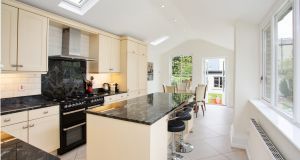 The kitchen/dining extension feels fresh, thanks to large windows to the right, skylights to the left and a tall sash window and glass garden door at the dining end 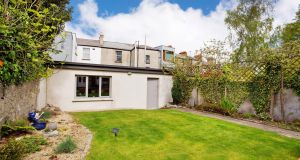 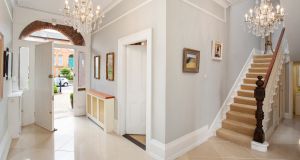 The stairs are carpeted with a soft runner, but the eye is drawn up by a clever skylight that emphasises the height of the stairwell

Marlborough Road filters a lot of traffic between Donnybrook and Ranelagh, but, once inside the calm retreat that is number 23, you would hardly notice.

The smart door opens into a noticeably wide hall floored in polished marble, with light grey walls and a smart alcove the only features; there is no clutter and only one door to distract from the restful air.

This door opens into a gracious formal livingroom at the front of the house, with two sash windows flanked by original shutters. Other period features include the grey marble fireplace, ceiling coving and daintily decorative centrepiece, all a fine backdrop to the owner’s art and furniture.

Through the hall, where there is understairs storage and a neat guest toilet, is the second livingroom. Originally two rooms, with two gas fires, it feels both cosy and bright, with built-in shelving and double doors to the garden.

This room also opens into the kitchen/dining extension, which was built around 10 years ago. It feels fresh, thanks to large windows to the right, skylights to the left and a tall sash window and glass garden door at the dining end. There is plenty of storage and a large island with built-in features including a wine fridge and an oven to supplement the Flavel stove.

The stairs are carpeted with a soft runner, but the eye is drawn up by a clever skylight that emphasises the height of the stairwell. The main bedroom spans the back of the house and it is quite an oasis, with luxurious curtains and built-in storage that continues in the hotel-glossy bathroom.

There are two good double bedrooms at the front, and the quality of the double glazing is such that it shuts out the clattering of the bin lorry. There is a smart shower room on this landing.

The owner, a keen golfer, has created a putting green in the space beside the kitchen extension

At the end of the unfussy garden is a large block-built garage that could fit two cars (an electric gate opens to a lane) and is suited to a variety of purposes including its current use as a gym.

The owner, a keen golfer, has created a putting green in the space beside the kitchen extension, and a ball of any type thrown in any direction would have a wide choice of local clubs to land in. Number 23 is just around the corner from the thrumming hub of Donnybrook village, and is close to lots of sought-after schools.

The front garden, with its neat hedging, has gravelled parking for two cars. The house is for sale through DNG seeking €1.45 million.