Modern greats at deVeres from Yeats to Joseph Walsh 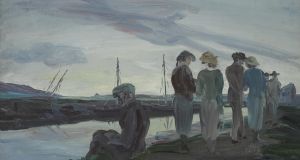 The forthcoming Irish Art auction by deVeres at the Royal College of Physicians on Kildare Street on March 26th will offer almost 150 lots, spanning the works of Irish artists from the mid 19th century to contemporary offerings.

Included in the sale are two sculptural chairs by Joseph Walsh, the Cork based designer who runs his studio from a farmstead in Riverstick village outside Kinsale. The work of this designer has transformed from a cottage industry to worldwide recognition – his works now feature in both private and public collections around the globe.

One of his Enignum Locus chairs is on permanent exhibition at the Tsubaki Grand Shrine in Japan, and in 2014 Park Avenue in New York was closed to traffic, to allow a table created by the self-taught furniture designer to be hoisted up into a Manhattan penthouse.

His commissions include the dramatic curvilinear seven-metre free form Magnus Modus in the National Gallery of Ireland on Merrion Square – which Walsh describes as “perfectly imperfect”, and Magnus Celesti – a free form sculpture emerging from a desk for a private commission.

The chairs featured in the deVeres sale, lots 52 and 51, from the Enignum I and Enignum II collections have an estimate of €8,000–€12,000 each. A similar Enignum II achieved £13,750 at Sotheby’s in 2017, which was the first time their Irish Arts sale included a design piece.

Some of Walsh’s work is currently on display as part of the Surface Matters exhibition in Dublin Castle and at The European Fine Art Fair (TEFAF) in Maastricht.

Further lots come from the collection of singer songwriter Brian Kennedy, who was vocal last year about his battle with cancer and the cost of the treatment necessary. On the public Go Fund Me forum, the singer made an emotional plea announcing that he discovered his health insurance would not cover the cost of his hospitalisation – to the tune of £60,000, The singer, who lost his brother Bap to cancer in 2016, described his recent operation in December as “the worst week of my 52 years on earth”.

His collection includes nine works by Patrick Scott – elected a Saoi by Aosdana in 2007, and considered to be ‘the first exponent of pure abstraction in Irish art’ according to the Irish Museum of Modern Art.

Also included are a selection of Louis le Brocquy prints and a charcoal drawing of the singer by Colin Davidson. The Kennedy collection is expected to generate in excess of €30,000.

Of interesting provenance is lot 28, Balcony, Grasse by William John Leech, which was once owned by Lady Hazel Lavery, and hence by descent. Lady Lavery was painted as the female personification of Ireland by her husband Sir John Lavery – and immortalised on Irish bank notes from 1928-1970s.

Of further interest is James Humbert Craig, whose recent work Flax Growing Northern Ireland achieved more than double its lower estimate (€20,000–€30,000) selling for €54,000 at the recent Whyte’s auction at the RDS.

This work, lot 31 – The Blue Hills of Antrim, though much smaller than Flax Growing is listed with an estimate of €1,000–€1,500. Works by Craig are on exhibition at the National Gallery, the Hugh Lane Gallery in Dublin and the Crawford Gallery in Cork..