Luggala: Contents of Guinness estate go on sale in London

Furniture, jewellery and art works owned by Garech Browne to be auctioned by Sotheby’s 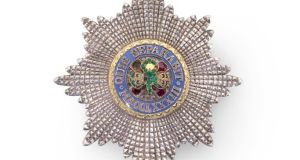 The contents of one of Ireland’s most famous country homes, Luggala in Co Wicklow, are to be sold at a major auction in London later this month.

Sotheby’s has announced that it is handling the sale of a collection of items belonging to the late Guinness heir, Garech Browne, who lived on the 2,000 hectare Luggala estate in the heart of the Wicklow mountains.

Browne, a well-known art collector, died in London in March 2018 at the age of 78 at a time when the Luggala estate was on the market.

It sold last year for a price believed to be in excess of ¤20 million, but below the original asking price of €28 million.

The award was created by King George III in 1783 during the American War of Independence to honour the loyalty of Irish peers.

The one in the Luggala collection was awarded to Browne’s father, the 3rd Baron Oranmore and Browne, Geoffrey Henry Browne, in June 1918 when he became one of the last three non-royal Knights of the Order of St Patrick.

The only new appointees to the Order since the partition of Ireland were members of the Royal Family and it has become dormant since the death of the last surviving Knight, Prince Henry, Duke of Gloucester, in 1974.

Another item, a cameo of a young woman thought to be Mary Queen of Scots which is believed to be a 16th-century Italian piece, is guiding at £4,000-£6,000.

Six Claddagh rings, some the work of late 18th-century Galway goldsmiths, are valued at between £150 and £4,000.

Sotheby’s said the auction, including artefacts from Luggala as well as Killadoon House near Celbridge, Co Kildare and Carton House in Maynooth, Co Kildare, would present an extraordinary selection of works from important aristocratic collections sourced throughout Europe as part of its seventh Royal and Noble sale.

The auction house said the various lots had been selected for their outstanding quality and provenance and included furniture, paintings, decorative arts and jewellery.

Among the most valuable items from Killadoon House, the home of the Earls of Leitrim, is an early 17th-century Italian table top, made of stones pietre teneare and pietra dure, which carries an estimate of up to £60,000, and a set of eight, Irish, George III mahogany hall chairs emblazoned with the Clements’ family crest of the Earls of Leitrim with a guide price of up to £25,000.

However, the most valuable lot up for auction is an Irish Regency rosewood-banded mahogany dining table with seven pedestals from Carton House dating from around 1815.

The table, which is believed to be the work of leading cabinet makers, Mack, Williams and Gibton, could fetch bids of £120,000.

Sotheby’s described the item as “arguably the most important Irish dining table of the period”.

One of the lots expected to attract most interest is an album of rare etchings by Queen Victoria and Prince Albert of their domestic life at Windsor Castle which are guiding at up to £100,000.