Life’s Work: ‘The bookshop is a lovely life rather than a living’ 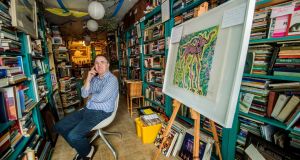 John Donohoe in his shop in Athlone. Photograph: Brenda Fitzsimons 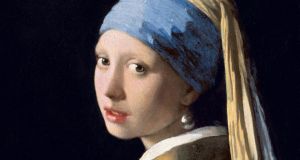 Girl with a Pearl Earring by Vermeer

Who?
John Donohoe. I own and run John’s Bookshop in Athlone, Co Westmeath, which sells second-hand and antiquarian books, rare documents, ephemera, photographs and a few select paintings. It’s a small shop with a couch, an armchair and 9,000 books. I have another 20, 000 in my very cluttered home, waiting to make their way into the shop. While I stock all sorts of books, I keep an emphasis on Irish authors, Irish history, local history and Irish-language books. I love signed and inscribed first editions, original documents and beautifully bound antiquarian books.

What’s your background?
After graduating in psychology and theology from Trinity College Dublin, I worked as a clinical psychologist for many years. Then in 1997 an opportunity to open a bookshop came my way, and I took it without really knowing what I was getting into.

How did you get into the business?
I raised the start-up costs for the bookshop by selling a painting I owned by the artist George Russell (also known as AE). I heard sometime afterwards that the Edge of U2 had bought it. It was a big step for me to sell that painting, as I am a collector of the work of AE, but over the years since then I have been able to buy a large number of his writings, paintings and archive, so selling that particular painting has enabled me to buy more.

What is business like?
Although online shopping is fast becoming a big part of our lives, I believe browsing in a bookshop is still one of life’s most pleasurable things to do and I strive to make that experience memorable. I do run my own website – johnsbookshop.com – but not everything I have in stock is on it yet. I add new things almost every day, so there are always new books to browse. The experience of owning the bookshop has been marvellous. Customers have taught me so much, and conversation is an integral part of the whole experience. I often say it’s a lovely life rather than a living – as it is hard to stay solvent. Lots of bookshops have closed all over the country since I first opened. We are a disappearing species. I think I am lucky to own the bookshop. I am also eager to contribute in any way I can to retaining our literary and artistic heritage. I hate to see so much of it going out of the country to private collectors and universities abroad. To this end, I have been able to donate a few items I have bought over the years to museums around Ireland, including the James Joyce Tower in Sandycove, the Dublin Writers’ Museum and the Heritage Centre on the Aran Islands.

Career highlights?
People bring in the most fascinating things to be valued or for me to buy. I remember one woman bringing in an exquisite, beautifully hand-illustrated Book of Hours, made in Rouen, France, in 1470 . It was amazing that it had survived all those years. I also remember buying at auction a wonderful handwritten quote by William Butler Yeats dated April 27th, 1916. On his headed notepaper was written “Only the Wasteful Virtues Earn the Sun”. He is referring to his great grandfather, who jumped over the side of a ship in the Bay of Biscay to save a woman’s hat that had blown in the wind. Yeats’s mother used to warn her children not to waste their potential like this relative. I wondered, considering the date on the quote, was this his initial view of the 1916 Rising. I remember meeting the Belfast artist Raymond Piper at a book fair. He was a fascinating man. I gave him a gift of a first edition of Darwin. In return he invited me to his home and later drew me a portrait of AE, which I treasure.

What do you personally collect and why?
I love original documents and I have a letter addressed from Dunsink Observatory by Robert Ball, the astronomer, who taught the Earl of Rosse in Birr. I’ve also got a signed Salvador Dali lithograph and a Life of Lord Lawrence inscribed by Florence Nightingale. Samuel Beckett’s winning of the Nobel Prize was celebrated by a special printing of the first page of six of his plays. Only one copy of each was issued. I have First Love and Enough.

Advice to collectors/investors?
Collect something you enjoy, because you are investing time and money. To acquire a collection takes time and you need to enjoy the focus of your collecting in order to enable you to persist. I have always liked the idea of collecting everything by one writer, and many people who call into the shop do this. I’d recommend collecting books by two Irish poets: the late Michael Hartnett, because a full set of his signed works is very difficult to find; and Derek Mahon, because I could see him winning the Nobel Prize for Literature.

What would you buy if money were no object?
I’d like to fund a museum dedicated to the writings and art of AE, including an archive I have collected for the last 40 years. His work is of enormous importance to Ireland’s political, literary and artistic heritage, and he was a unique and pivotal figure to many notable Irish figures in the first half of the 20th century – but now he is famous for not being famous. AE was a remarkable man and Ireland owes him so much.

What’s your favourite work of art and why?
Last year I went to a documentary film about Vermeer in the Light House cinema in Dublin. I came out of the cinema so enthused that I went and booked a break in The Hague to go and see Girl With a Pearl Earring in the Mauritshuis. The entire experience was just lovely and the painting is sublime.