Irish Jesuits to dispose of rare book collection worth €2m 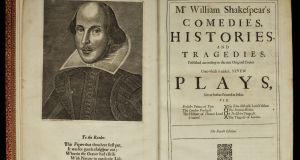 Shakespeare’s Fourth Folio, from the Jesuit collection known as “the O’Brien Library”, which will go under the hammer in a major auction at Sotheby’s next June. Photograph from Sotheby’s 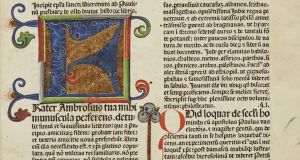 The Bible in Latin, printed in Nuremberg by Anton Koberger in 1478, from the Jesuit collection known as “the O’Brien Library”, which will go under the hammer in a major auction at Sotheby’s next June. Photograph from Sotheby’s

The Jesuit Order in Ireland is to dispose of its internationally important collection of rare books and mediaeval manuscripts valued at more than €2 million. Thousands of books from the collection have already been shipped to London and will go under the hammer in a major auction at Sotheby’s next summer.

The international auction house says the “rich collection” – owned for the last 117 years by the Jesuit Community at Milltown Park, Dublin – is “one of the most important of its kind to come to the market” and includes rare printed books from the 15th century, early editions of Shakespeare, English and continental literature and medieval manuscripts.

A spokeswoman for Sotheby’s told The Irish Times that “before putting the books up for sale, the Jesuits contacted the National Library of Ireland to enable them to review the collection and consider if they would like a number of important books and manuscripts on long-term loan.

As a result, a group of books and manuscripts were delivered to the National Library of Ireland” last month. However, the bulk of the collection will be sold in an auction that is expected to raise £1.5 million (€1.8 million) and possibly more.

The collection is currently being catalogued and the auction will take place on June 7th next in Sotheby’s saleroom at New Bond Street, London.

The Jesuits will use the proceeds of the sale for charitable purposes including “the upkeep of churches, the care of invalid priests, relief of the poor and religious education.”

“The library at Milltown isn’t equipped to care for these fragile books that require such specialist conservation and facilities,” Sotheby’s said, “hence the decision to disperse the collection.”

Among the books that will not be sold and have, instead, been given by the Jesuits “on long-term loan” to the National Library are what Sotheby’s described as “a rare manuscript on the kingdom of Ireland”, De Regno Hiberniae sanctorum insula commentaries by Peter Lombard, the archbishop of Armagh who died in 1625, “and several incunabula [a Latin term for books printed before 1500], including books by Boethius and Thomas Aquinas, some of which are copies unique to Ireland”.

A spokesperson for the Jesuits in Ireland said many of the books and manuscripts “are of such an age that they require specialist care and conservation” and that the sale would “allow for these precious books to be properly cared for and appreciated”.

The main Jesuit Library at Milltown, which serves the schools of philosophy and theology, will not be affected by the sale and “will still hold all the important and unique theology and philosophy books” needed by students.

The Government has already approved export licences allowing the collection to be shipped overseas. Sotheby’s told The Irish Times that “export licences have been granted for the sale by the Department of Arts, Heritage, Regional, Rural and Gaeltacht Affairs, in consultation with the National Library.”

The collection is known as “the O’Brien Library” as it was originally assembled in the 19th century by Irish judge and noted book collector, Cork-born Justice William O’Brien, who died in 1899. He bequeathed the collection to the Jesuit community at Milltown Park. Ironically, O’Brien had bought some of the books at an auction in Sotheby’s in London in 1890.

Sotheby’s said that “the O’Brien library has barely ever been consulted by students or scholars in the past 100 years” and that “after the sale, Dublin will still be rich in libraries with similar collections”, including those at Trinity College and Marsh’s Library.

The Jesuits, an international Catholic religious order formally known as the Society of Jesus, established its “province” in Ireland in 1860. The order has long played a prominent role in Irish education. Among its best-known schools are Belvedere College, Clongowes Wood College and Gonzaga College. Pope Francis, a Jesuit formerly known as Fr Jorge Mario Bergoglio, spent some time at Milltown Park in 1980 learning English.

In 1993, the Jesuits in Ireland gave Caravaggio’s The Taking of Christ on “indefinite loan” to to the National Gallery. The painting, believed to be worth at least €50 million, had hung, undiscovered for decades, in the Jesuit House of Writers at Lower Leeson Street, Dublin.