Household names such as Paul Henry and Walter Osborne are not just seen as sound investments; their aesthetic clearly appeals to today’s fine-art purchasers 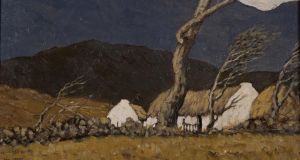 ‘A Farm in County Down’ by Paul Henry 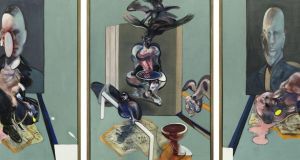 Since the economy crashed in 2008, the Irish fine art and antiques market has experienced a flight to quality and search for safe-haven status. The most significant trends are the fall in value of both modern art and antique furniture.

Despite the startling prices being achieved for abstract modern and contemporary art at international auctions, Irish taste remains traditional and conservative. Auction results suggest the art that continues to be most highly sought after is traditional and representational, particularly landscapes of the west of Ireland, pastoral scenes, portraits and still lifes.

In a review of the 1964 annual summer exhibition of the Royal Hibernian Academy, an [anonymous] Irish Times critic wrote: “It might be no harm if the Paul Henry tradition of western landscape were let die and its life artificially prolonged no further. And the rollicking, frieze-clad, donkey-galloping school which descends from the earlier Jack Yeats has not much more vitality left.”

But almost half a century later, the most sought-after art in Ireland continues to be the work of household names such as Paul Henry and Jack B Yeats, and the motivation for buying is a mix of pleasure and investment.

The top-selling artists at auction are the old reliables who have dominated the market for decades, particularly Paul Henry, Jack B Yeats, Walter Osborne, Sir John Lavery, Roderic O’Conor, Frank McKelvey, Sir William Orpen, William John Leech and Sean Keating. A motley crew of departed artists, many of them born before the State even came into existence in 1922.

Top 10 paintings
Of the top 10 paintings auctioned in Dublin last year, four were by Jack B Yeats and three by Paul Henry. Not a single living artist made even the top 20.

Contemporary art has fallen sharply in price and, unlike south Dublin house prices, there is little sign of any recovery.

Auctioneer George Gerard Mealy of Mealy’s Fine Art doesn’t pull any punches. He says: “The auction market for works by fresh contemporary artists in Ireland has all but collapsed in recent years with prices often down 70 to 80 per cent on comparable sale prices in 2006-2007,” and that “artists themselves are often quite shocked at the low prices realised when their works are re-sold in situations where the auctioneer is instructed to sell without reserve.”

While the most sought-after paintings are those of “peasant Ireland”, the antiques market, by contrast, caters primarily to nostalgia for (or fascination with) its polar opposite – the privileged world of the Anglo-Irish aristocracy and their big house country residences and elegant Georgian townhouses. The sale of contents from these houses,from chandeliers to peat buckets, continues to attract significant interest at auction.

There is one notable caveat. Traditional brown furniture has declined in value and popularity because of changing tastes and lifestyles. Mealy, like many other auctioneers, has gloomy news for anyone hoping to make money from 19t- century furniture, noting that pieces such as: “Sideboards, davenports and wardrobes appear to be the worst hit and are perceived as obsolete,” and that “with the exception of exquisite examples of authentic 18th century furniture, the market for period mahogany furniture is at an all- time low.” He went on to say that “large 19th-century wardrobes that once fetched €1,000-€1,500 are now sold for as little as €100.” By contrast: “Art Deco, Art Nouveau, Arts and Crafts and mid-20th century vintage furniture are all currently in vogue and performing well in the sales,” says Mealy.

James O’Halloran of Adam’s auctioneers in Dublin confirmed the decline in antique furniture prices “except for exceptional pieces”, but said in addition to art, silver and china (including Meissen and early Belleek) were among the sectors performing well.

Jewellery, gold coins and smaller decorative items such as china, porcelain and pottery, clocks, glassware and silver are the most collected antique decorative art objects. More specialist items such as militaria, historical and sports memorabilia, stamps, wine, vintage posters and rare books continue to attract, particularly niche collectors. One person’s treasure may be another’s junk but there really is a market for almost everything old. Antique medical equipment, vintage toys and fashion accessories, and pieces of Victorian taxidermy are among the quirkier categories which can pleasantly surprise vendors.

Historical memorabilia
Historical memorabilia is keenly collected and can attract a much wider public if an item relating to a popular figure such as Michael Collins or an event such as the 1916 Rising is being sold. The ongoing decade of centenaries, commemorating the events from 1912-1922 which led to the foundation of the State, is likely to generate further interest and possible price rises for items associated with key people and events – especially the first World War, the 1916 Rising, the War of Independence and the Civil War.

Antique jewellery sales also appear to be holding up well. This is a popular category for both collectors and investors as it combines pleasure and investment. Vintage watches are achieving strong prices and are sought after mostly by men according to O’Reilly’s Auctioneers on Francis Street in Dublin. And, despite the decline in the international price of gold this year, John Weldon Auctioneers has seen continuing strong demand for gold coins such as Kruggerands and sovereigns.

Next week: How to buy at auction; and understanding the costs

International tastes
Most Irish art and antiques are sold in Ireland, or at the big London auctions, and are in general bought by Irish buyers or by Irish collectors living abroad. There is little demand for Irish lots from international buyers. That said, two Irish names: Francis Bacon (1909-1992), the Dublin-born painter who lived in London and Eileen Gray (1879-1976), the Art Deco designer who was born in Enniscorthy, Co Wexford, and lived in Paris, have climbed into the top-tier and are the most collected and expensive Irish figures in the international fine art and antiques market. Items by both can, and do, regularly sell for millions. The record price at auction for a painting by Bacon was $86.3 million (€55.6 million) paid in 2008, at Sotheby’s, New York for his three-panel painting Triptych, 1976 which was reputedly bought by Roman Abramovich, the Russian billionaire oligarch and owner of Chelsea Football Club.

In 2009, a leather armchair, known as the Fauteil aux Dragons, designed by Eileen Gray sold for €21.9 million in Paris and set a world record price for 20th century furniture.